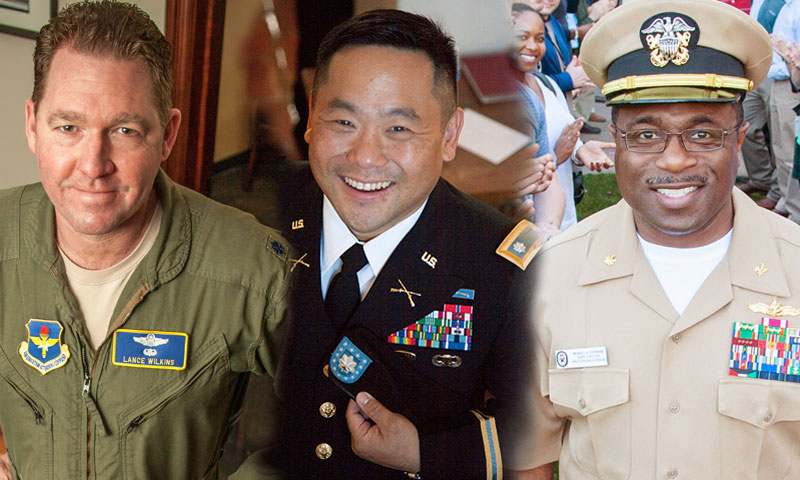 The Air Force selected 456 Line of the Air Force lieutenant colonels for promotion to colonel, Feb. 11. Wilkins, serving as Commander, NPS Air Force Element since November of 2014, is one of the officers on that list. Wilkins himself will soon transition to the role of a student when he departs NPS for attendance at the Air War College in June.

Sok celebrated his promotion to Lt. Col., Feb. 11, with several family members in attendance. Not to be thwarted by distance, Sok's own parents from South Korea attended via a tele-presence connection in the Tower Room. Sok is a doctoral candidate in the Modeling, Virtual Environment and Simulations curriculum.

A Supply Corps officer, Stephens celebrated his promotion with a traditional Wetting Down ceremony in the Trident Room with several of his classmates. His wife and three children shared in the moment, with Stephens' young daughter helping pin the shiny oak leaf onto his lapel. Stephens served his first 14 years in the Navy as an enlisted before receiving his commission to Ensign. He is currently pursuing a master's degree in Acquisition Management.

Today@NPS showcases some of the speakers, conferences, experiments, lectures, and other events that take place at the Naval Postgraduate School on a daily basis. If you would like more information about any of the highlighted activities please contact the Office of University Communications at pao@nps.edu.
February 2015 Title