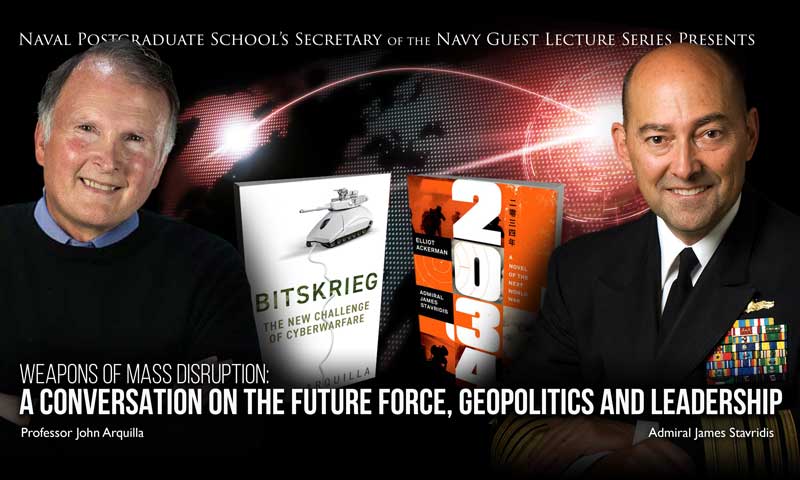 Stavridis began the V-SGL cautioning the audience about how the military’s overreliance on advanced technology could leave it vulnerable to massive disruption, often by technology that is already proven and readily available.

“Our greatest strength is often our greatest vulnerability, and we know that in life, in our personality and the way we interact with others,” said Stavridis. “As we look at technology and our growing dependence on it, we ought to bear in mind that there is always going to be another turn of the wheel and that the degree to which we become completely captive of a particular technology can lead us to doom.”

To demonstrate his point, Stavridis brought up the lessons learned from the 1415 Battle of Agincourt where 30,000 French knights clad in plate armor—what they thought was the greatest military technology at the time—fell to King Henry V’s 7,000 longbowmen. The French’s overreliance on heavy armor slowed them down on the muddy battlefield as British archers rained on them approximately 75,000 arrows per minute.

“Dependence on a new technology like cyberspace, artificial intelligence, or nanotechnology will enable you to move forward,” continued Stavridis. “But does it create an Achilles’ heel? Often it does.”

Turning to geopolitical power, Stavridis referred to his book “Sea Power: The History and Geopolitics of the World’s Oceans” to discuss how the oceans, and countries’ control of them, shape their own power in relation to allies and rivals. He referred to foreign correspondent and geopolitics expert Robert Kaplan’s book “Asia’s Cauldron: The South China Sea and the End of a Stable Pacific.”

“‘Asia’s Cauldron’ brings up the image of a big pot bubbling like ‘Macbeth’ with the witches around it,” described Stavridis. “As the fire burns around the edges of that cauldron, dangerous things happen. The South China Sea is this enormous caldron with China, Taiwan, the Philippines, Vietnam, Thailand, Malaysia, and a little corner of Australia. It would be difficult to create a greater hot spot in global geopolitics than the South China Sea.”

As the South China Sea may gradually boil, Stavridis also predicted that the Indian Ocean could potentially be a geopolitical hot spot as countries gain a vested interest in the ocean’s untapped resources. He also noted that India lies in the middle of China’s planned “One Belt One Road” initiative. How India reacts to that initiative could tip the geopolitical balance of power.

“[Authoritarianism and democracy] are two central nodes on this map, and right in the middle is India,” reiterated Stavridis. “Where India ends up on this curve is going to matter. Who knows how this is going to play out over the next 50 years, but I bet on India being fractious and difficult in the many challenges they face, and will come this way [supporting democracy]. Assuming this is true and noting that India is the world’s largest democracy, it’s going to have this big role in world affairs.”

Giving the audience several things to think about, Stavridis turned to the importance of reading to broaden the mind and improving the critical thinking of future leaders.

“I want to focus on reading and leading because I think the two go hand-in-hand,” said Starvridis. “The reason for that is that every time you pick up a book, you’re entering a simulator. You are putting yourself in the center of a completely different universe that you’re normally in the middle of. Fiction or nonfiction, where it becomes a simulator is when you say to yourself, ‘What would I do now?’”

The books that he encouraged leaders to have on their shelves would encourage them to think about what would they do in the book’s predicament, such as Harper Lee’s “To Kill a Mockingbird.” He asked the audience if they could step in and do the right thing at an enormous risk to themselves, like Atticus Finch.

Stavridis concluded the V-SGL by fielding questions from NPS students like Air Force Maj. Nicholas Underwood, who is currently studying issues of technology strategy in NPS’ Defense Analysis program. Underwood asked how one could tell when a service becomes over-dependent on advanced technology.

“I think there are some tippers that come before those points, and they have to do with how we use training exercises and simulations,” responded Stavridis. “I think there’s an important element of going into exercises in simulations where we deliberately withdraw our capability, then see what the results look like and see if we can overcome that sudden blinding of the elephant. Hopefully you will then avoid an Agincourt moment and realize beforehand if you’ve lost the technological edge.”

While cautioning about an overreliance on technology, he recommended several research areas when NPS Graduate School of Defense Management student Air Force Capt. John Espinosa asked what graduate students should research, or have a situational awareness of, to get ahead in geopolitical knowledge.

“I think artificial intelligence is going to determine a great deal of how the world moves over the coming decades,” replied Stavridis. “Artificial intelligence, I think, is going to have tactical, operational and strategic impact in ways that are difficult to discern right now. Cyber is also important. There will never be another conflict that does not have a significant cyber component in it. I think biology such as human performance enhancement or human life extension is underrated.

“Where they kind of come together is what is sometimes called the Singularity,” continued Stavridis. “This is the idea of a merging of biology, artificial intelligence, bioengineering, and nanotechnology. I’ve listed some individual technologies, but what really matters is our ability to synthesize and understand how they fit together and how the sum will be greater than the addition of several parts.”

“Your question brings us back to the Naval Postgraduate School, where we’ve talked about technology, knowledge, and driving research to find the right answer,” said Stavridis. “But alongside it, and this is the power of NPS, are the fundamental issues you raised in your question, which are about leadership and risk. I think the ability to balance those three things and then harness it with technology is really the key to creating the kind of leaders we want.

“I think that under the leadership of retired Vice Adm. Rondeau and with extraordinary professors like John Arquilla, students like all of you and` all of those listening in this community have a place where you can pursue those and be part of this marvelous synergy that occurs when you harness both of those streams of human endeavor,” he concluded.

For more information about NPS’ SECNAV Guest Lecture program, and to watch past lectures, visit http://www.nps.edu/SGLs.