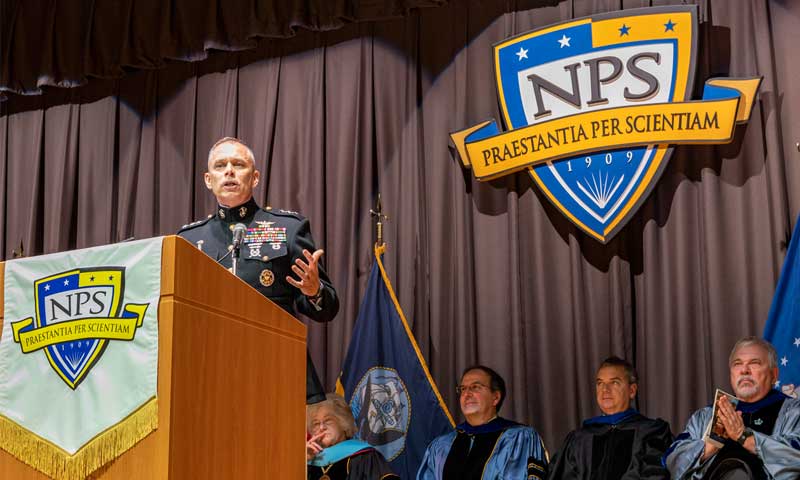 U.S. Marine Corps Lt. Gen. Matthew Glavy, Deputy Commandant for Information, served as the commencement speaker for the 248 graduates, including 28 international students from 15 countries. He began by acknowledging the current geopolitical climate and lingering consequences of the COVID-19 pandemic and how these trials affected the graduates time at NPS.

Glavy continued his remarks by quoting President George H.W. Bush, who said, “The best and brightest military officers from the U.S. and around the world are assigned to the Naval Postgraduate School.”

“Your boldness, insight, imagination and innovation will have to be brought to bear to get the full value of your NPS education,” said Glavy. “They’ve instilled in you an insight that very few people get in this world.

Glavy shared numerous personal stories about his encounters with NPS-educated Marine Corps officers who set themselves apart through their knowledge, expertise and problem-solving abilities. As an example, Glavy recalled sitting in on a briefing provided by a Marine Corps captain to U.S. Army Gen. James Dickinson, Commander, U.S. Space Command, and his staff, and how impressed Glavy was at the captain’s ability to hold his ground with the deep technical expertise that he got from his NPS education.

NPS President retired Vice Adm. Ann E. Rondeau congratulated the graduates on their perseverance through the challenges of COVID-19, a fast-paced academic schedule, the deadline and demands of thesis production, and all the rigors of earning the degree that will be awarded to them during the ceremony.

“You’re not just students, but also the future of our ability to be invested in the warfight that is in front of us, no matter where it might be,” noted Rondeau. “You are a select group in ways that very few other graduates on the globe [are] … For all of you that are graduating, it’s been an extraordinary privilege to serve you on this journey.”

Rondeau stressed the important networks graduates form while at NPS, and how they help to understand solutions and create great things for the delivery of mission.

“No problem is solved as a single discipline or a single point of view,” stated Rondeau. “This notion of interdisciplinary, international and interservice are all about integration of knowledge and application to solving problems. Our Secretary of the Navy and fellow NPS graduate, the Honorable Carlos Del Toro, calls this, ‘Strength in Unity.’”

“Proactive cleaning of marine coatings has previously been shown to have many economic and environmental benefits when compared to reactive cleaning,” noted Royster. “However, existing data sets for U.S. Navy qualified coatings were limited to a single geographic area, precluding prediction of grooming’s effectiveness in the wide variety of locations that harbor U.S. Navy vessels. Via execution of a concurrent study in both warm-water and cold-water locations, my research aimed to investigate the correlation between seawater temperature and the proactive grooming frequencies necessary to control biofouling accumulation.”

Royster presented the problem motivating his thesis research at the annual NPS Big Ideas Exchange and the NavalX Agility Summit in 2021 and was selected as the Agility Summit Challenge Champion, which gave NPS an additional $100,000 in funding to advance his research.

“I am going to be graduating as a more confident and agile leader with a broader base of engineering knowledge that I can use to solve tough problems facing the fleet,” Royster said.

U.S. Marine Corps Maj. Paul P. Moreau is an intelligence officer graduating with a Master of Science in Management degree in the Defense Systems Analysis curriculum. Moreau says he has received the interdisciplinary education needed to excel in today’s evolving service.

“The world is changing, and warfare is getting more complex and more technological,” Moreau says. “The Marine Corps and Navy are adapting to meet that challenge, and I think a graduate education sets me up to be part of the change happening in the services.”

Glavy finished his remarks by quoting the late U.S. Air Force Col. John Boyd’s “To Be or To Do” philosophy, which states that you will come to a fork in the road and have to decide which path to take.

According to Glavy, if you worked for Boyd, he would ask you a question along the lines of, “Do you want to be or to do?”

Glavy concluded by noting that after 36 years, “It’s all about doing. And this incredible institution has afforded you that opportunity.”