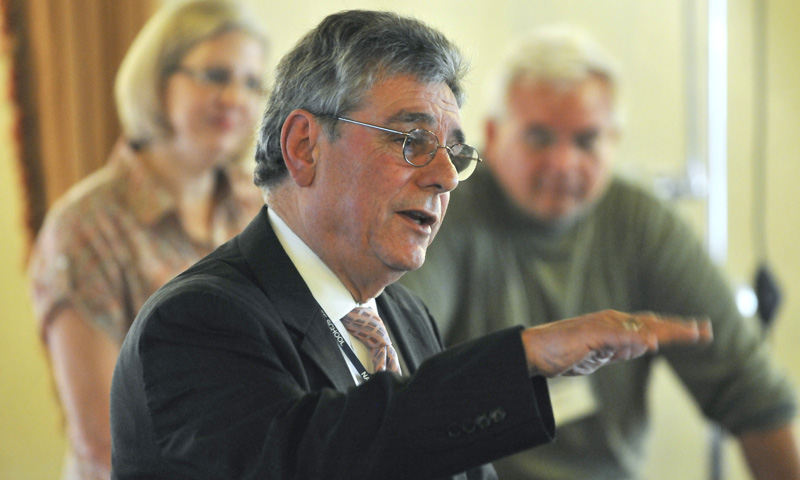 Prominent military strategists have stressed that prevention of conflict is equally as valued as victory in conflict. The Navy, Marine Corps and Coast Guard’s very own “Cooperative Strategy for 21st Century Seapower” clearly states, “preventing wars is as important as winning wars.”

The concept of prevention, however, is difficult to transition from strategy into action. In support of this effort, the Global Public Policy Academic Group (GPPAG) recently held a Prevention Regimes and Strategies Workshop on the NPS campus – three days of dialogue and discourse on the tactics and challenges of implementing prevention strategies.

Invitations to the workshop were extended to senior leadership throughout the defense establishment and beyond – individuals who have policy responsibility, are thought leaders, social scientists and other academics, as well as colleagues from USAID, the Department of State, the Joint Chiefs of Staff Strategic Plans and Policy, and many others.

The goal of the workshop is to explore how prevention looks as a strategic goal, a policy strategy, and in practice in these different worlds. In the end, organizers hoped to provoke new collaborations and set a research agenda.  As Ventresca notes, “The term ‘prevention’ is widely used, though with wide variance in meaning, and possesses even less agreement about specifics in policy and practice.”

Assistant Professor Karen Guttieri, also a co-organizer of the workshop, added that the idea of prevention, as the former United Nations Secretary General Kofi Annan described it, is to shift “from a culture of reaction to a culture of prevention.”

Guttieri explains, “The first step is to clarify the term, asking ‘prevent what?’ What are the boundaries of prevention?  A lot of the discussion on prevention has been seen focused in recent years looking at the prevention of deadly conflict, particularly civilian on civilian conflict.

“What lessons can we draw from prevention strategies in different areas of international security,” she continued. “What systems of positive and negative prevention work best … we see a range of approaches including deterrence, compellence and denial – even pre-emption.”

Dr. Janine Davidson, Deputy Assistant Secretary of Defense for Plans, opened the workshop with her keynote speech on the NPS Quarterdeck. Davidson noted in her keynote that the success of prevention is dependent on a capacity of trust and confidence in other nations, while she also noted that prevention activities are the hardest to defend against defense spending cuts.

As the workshop closed, and the dialogue continues, organizers noted that the value of the workshop will not only be realized in the discourse and connections between diverse communities, but also in validating the academic group’s efforts in examining difficult conceptual questions critical to our increasingly globalized society.

“For GPPAG, this workshop re-enforces and extends the [GPPAG’s] expertise in studies of complex operations and in policy knowledge and innovation,” Ventresca noted, adding, "Governments can apply theories of prevention to the problems of terrorism, cyber warfare, nuclear proliferation, climate change and similar threats where the actors can be diverse and undefined, but what is it ultimately that is aimed at preventing?"