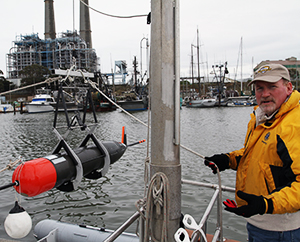 The Office of Naval Research has provided NPS with several underwater gliders (AUVs that glide through the water without propulsion) developed by Alaska Native Technologies.

Under the management of Dr. Kevin B. Smith, professor of physics and principle researcher, these gliders are being equipped with various underwater sensors and are being deployed in shallow water coastal zones, such as Monterey Bay, CA. 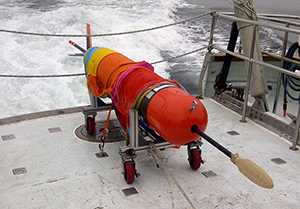 “These autonomous platforms provide NPS with a great opportunity to study the use of persistent sensing technologies in the undersea environment, allowing us to pursue both basic and applied research of interest to the Navy,” said Dr. Smith. 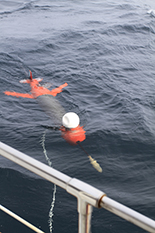 In August, 2012, Dr. Smith led a small team of researchers from NPS and GA Tech in the successful deployment of two such AUVs equipped with advanced acoustic sensors in Monterey Bay.  Acoustic data collected by the gliders is being analyzed by NPS and GA Tech in order to determine the utility of such systems for target tracking, and provide a system level context for consideration and evaluation of technology components under development for future DNS nodes or ad hoc ranges.

Future efforts at NPS will focus on the integration of new hardware into the gliders, including underwater acoustic modems, new data acquisition systems and timing clocks, and updated versions of the acoustic sensors.

A goal of Dr. Smith and his team over the next year is to develop consistency and improve reliability in glider deployment and recovery, thereby allowing for extended tasking of the gliders for weeks at a time.  Such persistence will produce a wealth of data on environmental and acoustic fluctuations in regions like the Monterey Bay.