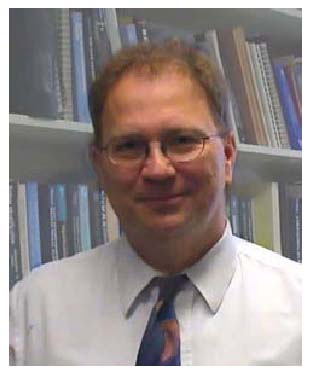 P. E. Pace is a professor in the Department of Electrical and
Computer Engineering at the Naval Postgraduate School. He received the B.S.
and M.S. degrees from the Ohio University in 1983 and 1986 respectively, and
the Ph.D. from the University of Cincinnati in 1990 --- all in electrical
and computer engineering. Prior to joining NPS, he spent two years at General
Dynamics Corporation, Air Defense Systems Division, as a design specialist in
the Radar Systems Research Engineering department. Before that, he was a
member of the technical staff at Hughes Aircraft Company, Radar Systems Group,
for five years. He received the Hughes Aircraft Company Full Study Fellowship
in 1984 and was the winner of the Kroeger Foundation Fellowship Award in
1989. Dr. Pace has been the Chairman of the N2/N6 Threat Missile Simulator Validation Working Group since Oct. 1996 and was a participant on the Navy's NULKA Blue Ribbon Panel in Jan. 1999. He is the current director for the NPS Center for Joint Services Electronic Warfare and the author of three textbooks, {\em Advanced Techniques for Digital Receivers}, Artech House Publishing, 2000, and {\em Detecting and Classifying Low Probability of Intercept Radar}, Artech House Publishing, 2004 and the 2nd Edition in 2009. Dr. Pace was awarded the NPS Outstanding Research Achievement Award in 1993, 1994 and 2000 for his work in electronic warfare. He was awarded the NPS Graduate School of Engineering and Applied Science {\em Merit Award for Teaching} in 2009 and is a major participant in the international Engineers and Scientists Exchange Program (ESEP). Dr. Pace has been a principal investigator on numerous research projects in the areas of receiver design, signal processing, electronic warfare and weapon systems analysis. He is an Associate Editor {\em IEEE Transactions on Aerospace and Electronics Systems Engineering,} (EW), a life member of the AOC and is a Fellow of the IEEE.
Other Experience
Research Interests
High speed signal processing in electronics and warfare applications
Teaching Interests
Electronic warfare
Signal processing
Radar systems
Digital receivers
LPI emitters