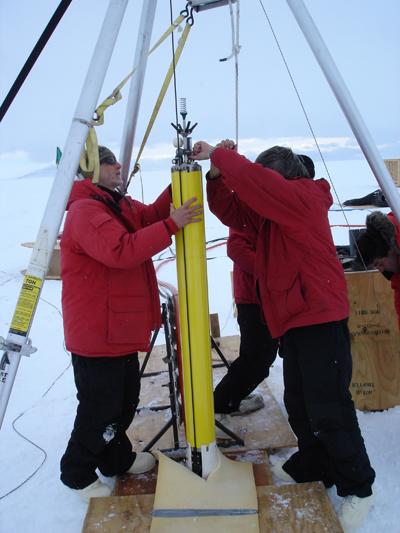 Naval Postgraduate School (NPS) Department of Oceanography Research Professor Tim Stanton and University of Alaska Department of Physics Professor Martin Truffer led the team to the remote edge of the Pine Island Glacier’s massive shelf. And the results of their expedition are giving scientists a rare look beneath the ice at one of the most critical research sites on the planet – a site whose fate could affect the lives of millions. Read the full story...

A team of NPS oceanographers is braving six weeks of frigid temperatures and gusty winds in Antarctica for the research opportunity of a lifetime. NPS Research Professor of Oceanography Tim Stanton, Research Assistant Professor of Oceanography Bill Shaw, and Oceanographer Jim Stockel are on a two-month-long expedition to the remote Pine Island Glacier ice sheet in Antarctica, where rapidly-moving ice sheets have researchers anxious to explore warm water currents beneath ice shelves that extend out into the ocean from the continental edge. The 10-man research team, comprised of researchers from three other universities and the National Aeronautics and Space Administration (NASA), has several important pieces of equipment in-tow, including three specially-designed research tools developed and built by Stanton and his team at NPS. Read the full story...

Updates From The Field 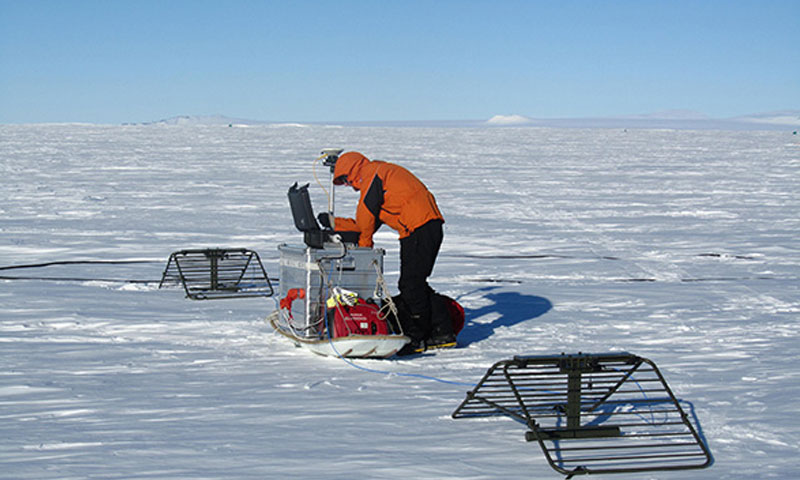 Mike Shortt working with scientists at the British Antarctic Survey is making a series of radar-based ice thickness measurements that resolve melting rates of the ice of periods of days to months. 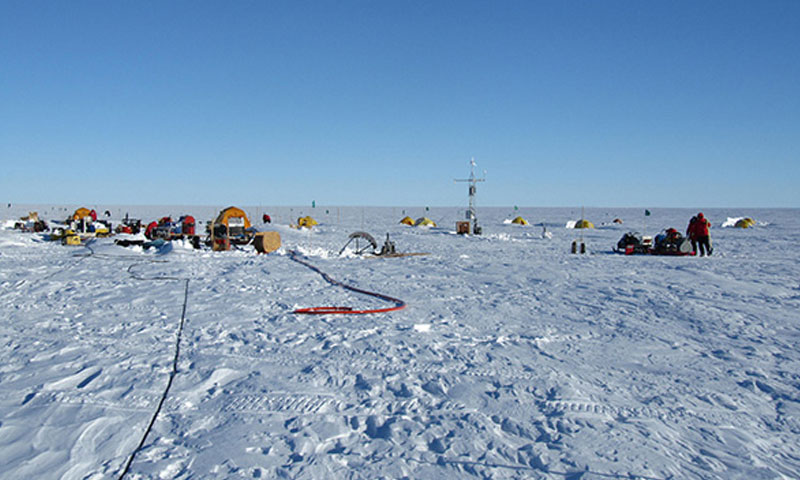 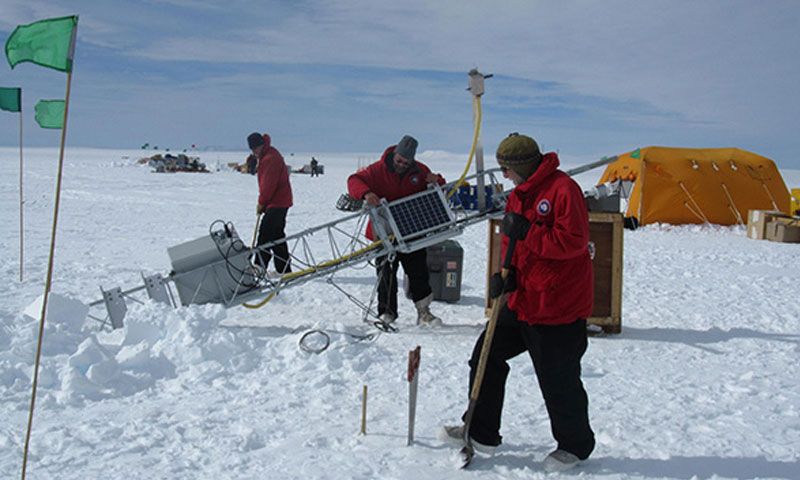 The infrastructure tower which ties together the ocean and surface sensors left at PIG is assembled by the NPS group. The tower facilitates two way communication between the sensors and computers at NPS to transfer data home and change instrument setups remotely over the next couple of years. 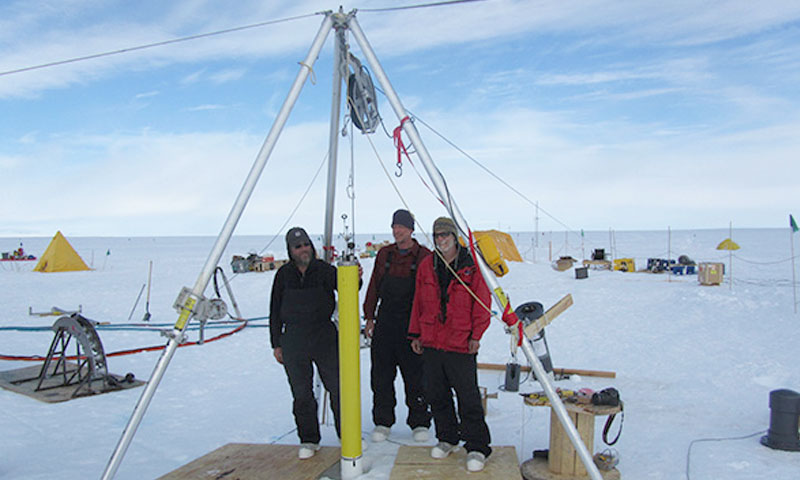 NPS research team members Stanton, Shaw and Stockel deploy the ocean flux profiler developed in their research group at NPS down a 460m deep bore hole through the Pine Island Glacier Ice Shelf. The profiler will measure temperature, salinity and current profiles through the water cavity below the ice shelf every day day over the next two years to study processes controlling ocean melting of the ice shelf. 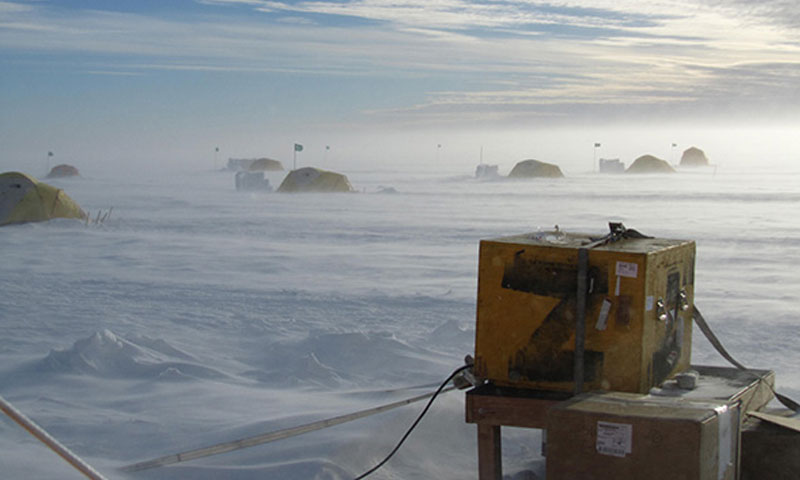 While the weather has been good at PIG this season, there are days when the 20-30 knot winds shut most work down. The blowing snow rapidly forms deep snow drifts that have to be dug out when work begins again.

Bad weather prevented flying out of WAIS Divide for 5 days, but we enjoyed the company and great food there through Thanksgiving week. On Friday I had the opportunity to be co-pilot for the British Antarctic Survey Twin Otter airplane flight taking 2000 lbs of freight down to Pine Island Glacier (PIG), 280 miles away. They are single pilot planes, so are willing to take anyone to help out-flying some and helping with loading and unloading freight. We had clear sunny weather most of the way, and it was great standing on the PIG ice shelf again a year later on a spectacular day. After  ½ hour unloading freight at the future drill site, we flew low over the spectacular shear zones on the sizes of the rapidly moving ice shelf up to the PIG support camp. I spent the afternoon helping dig out equipment stored through last winter in an ice berm. It has been tough and slow going for the ice camp personnel and 4 people in our science group who had been there for the last 12 days, with limited heavy equipment to move the 12 foot deep snow and ice drifts while also preparing a 10000’ runway to allow larger LC130 aricraft to land soon. While I was at the support camp, the Twin Otter took a geophysical survey group (and freight) from Penn State down to the ice shelf site to determine the shape of the base of the ice shelf using a low frequency radar. At the end of a long day I piloted half of the return flight back to WAIS.

After days of freight juggling at WAIS, on Decenber 1st four of us flew down to the PIG Drill Camp that was established the day before. We had yet another brilliant clear day, put up our mountain tents and enjoyed a great dinner, camping style, cooked by Sal, an experienced camp manager and photographer. The warm (-10C to – 15C),  sunny, low wind weather has continued allowing us to put up our 12’ by 20’ science tent where we will set up and test our ocean instrumentation in advance of the actual hot water drilling through the ice shelf. We are still waiting for the heavy generator and water pump that have to come down from the support camp, along with the University of Alaska, Fairbanks drill team who we will be helping. We hope the good weather holds as we get down to business at this profoundly remote field site. 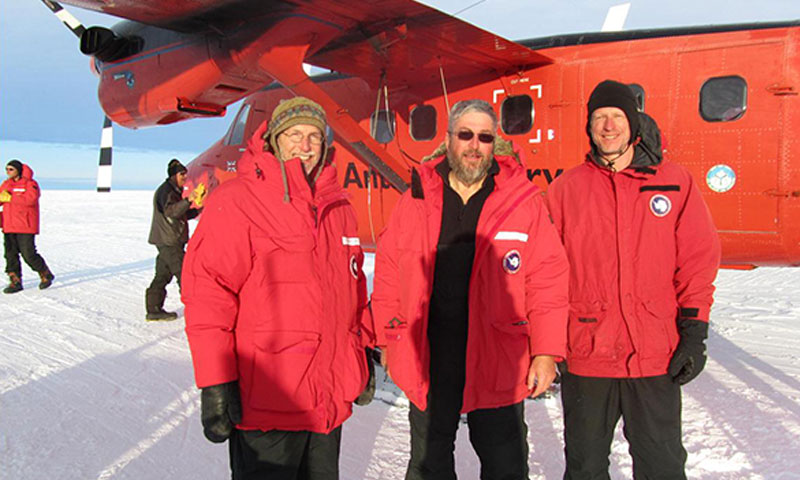 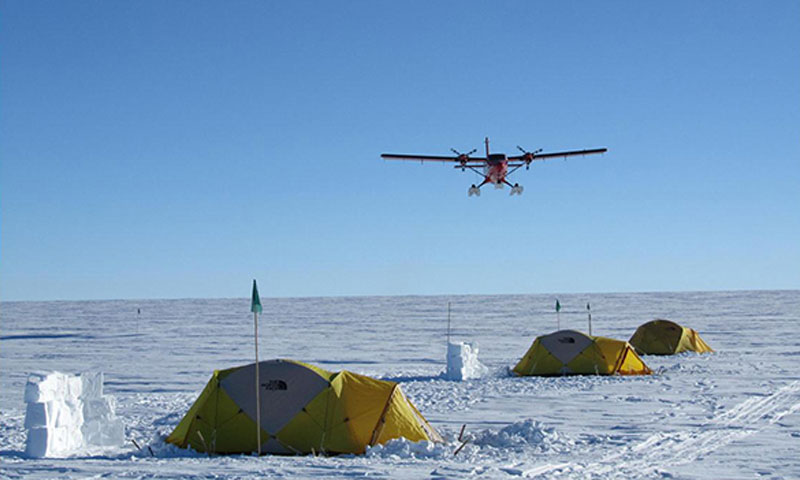 The Twin Otter approaches low over the drill camp, bringing equipment from the support camp 50 miles up from the ice shelf.

Our progress in getting to the Pine Island Glacier (PIG) drill site has been much better than last season. We flew into McMurdo Station on 17 November, and were able to get through all the check-ins and field training in a couple of days. While we have all been through it before, it is a good time make sure everybody knows how to put up our mountain tents, deal with the cold, stay safe, and minimize our impact on this pristine environment. Best of all we left McMurdo on time on 22 November on a LC130 (Herc) bound for the Western Antarctic Ice Sheet (WAIS) deep field camp which supports three science programs including PIG. It is a nicely setup camp with a heated RAC tent with running water and TWO SHOWERS in the end unit. The shower charge is shoveling two barrels of snow into the water melter. It is very comfortable, and the food is great.

This afternoon we had a tour of the deep drilling project located on the edge of the camp, run by a glaciology group from Penn State. Over the course of several summer seasons, they drill a DVD-diameter ice core down to 3600m depth below the 2000m high surface. Particles and gas bubbles trapped in the ice provide a climate record stretching back 65000 years, complimenting similar core records drilled through the Greenland ice-sheet.  Since snow builds up the ice shelf by about 1m each year, the drilling station is now under the ice sheet surface about 8m since it’s 2004 deployment. The whole facility is contained in a large arched under-ice room.

Tomorrow we are scheduled to leave this fine camp for a more primitive frontier camp at PIG, where we will be moving our equipment stored on a snow berm last season down to the PIG ice shelf drill site. In the next two months we plan to drill up to 6 holes 500m through the ice sheet and deploy instruments developed in our Ocean Turbulence Laboratory down into the ocean cavity below the shelf. These instruments will measure ocean circulation and turbulent fluxes between the water and ice over the next year, reporting by satellite every day back to NPS. 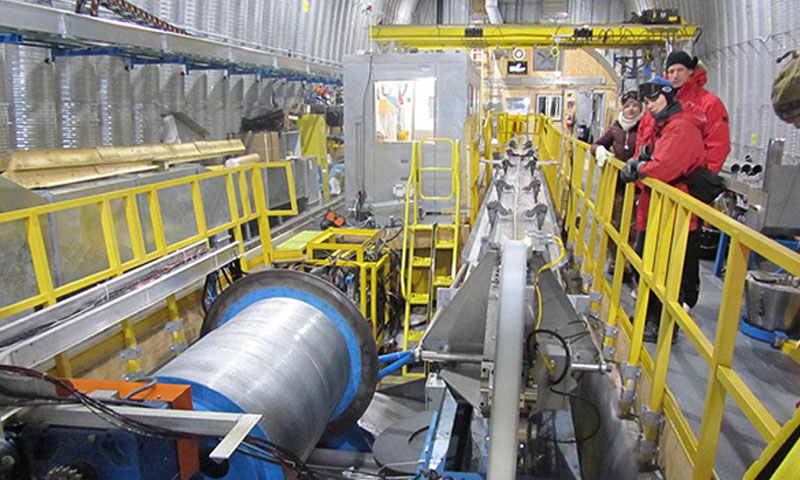 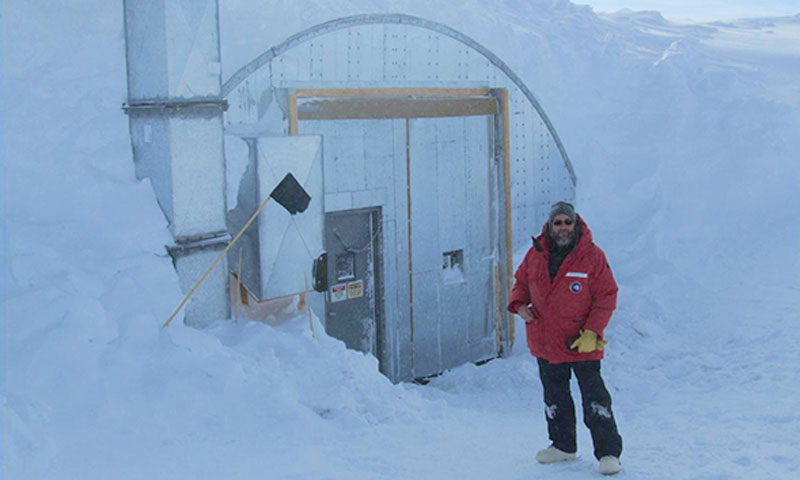 The sunken entrance to the drill and core handling facility.

Pretty soon, hopefully, we'll be out of email contact for several weeks. At the moment we are waiting in McMurdo for a flight to Wais Divide and then on to the PIG (Pine Island Glacier). Yesterday we tried. After a 3 hour flight, we circled for two more hours trying to land. But the weather just wouldn't clear. At 3 AM we were back after 8.5 hours in the air. Gruesome.... read more

I feel like the Arctic Tern that migrates from the Arctic summer all the way to the Antarctic every year. Although the birds do it under their own power, while I got here through a long and complicated series of flights: Fairbanks - Seattle - Los Angeles - Sydney (in an Airbus A-380) - Christchurch (New Zealand). In Christchurch we get outfitted with cold weather gear and then on to McMurdo (Antarctica) via military transport with a C-17.... read more 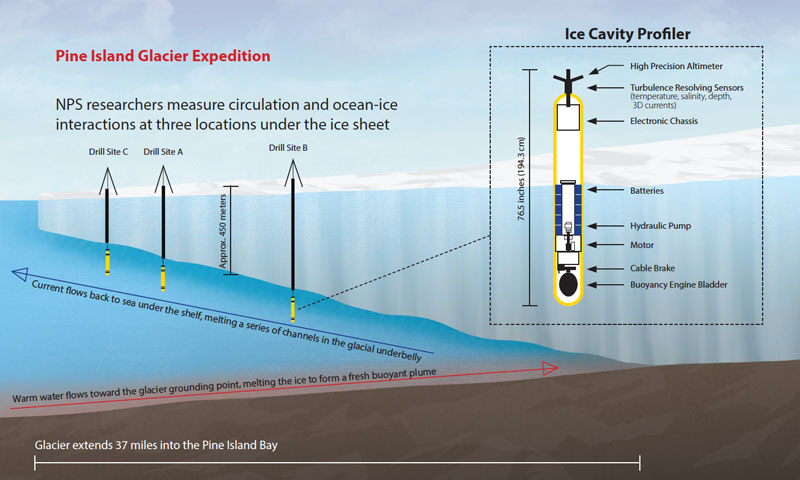 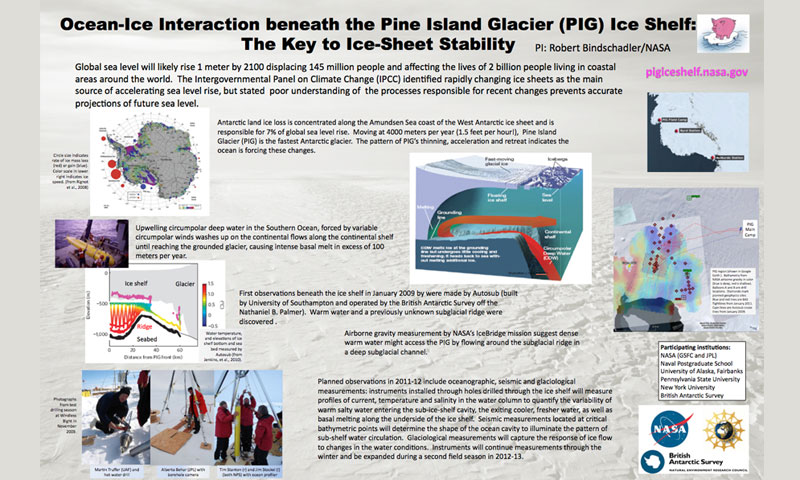