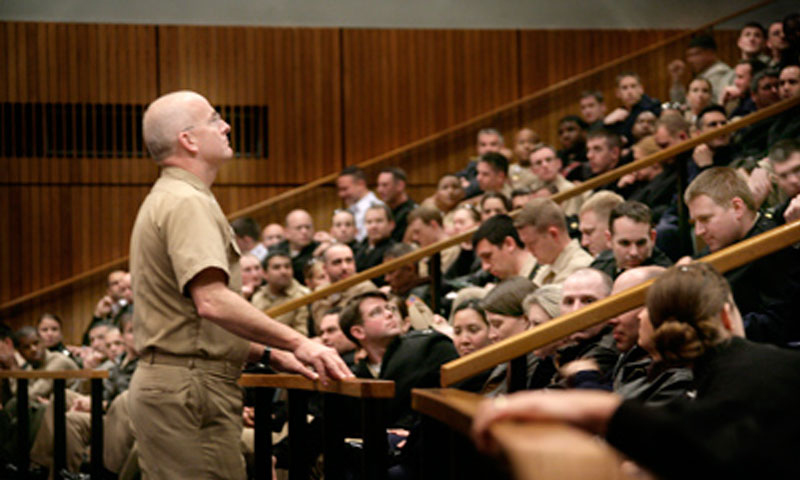 Less than a year ago, Navy Capt. Alan Poindexter was on the International Space Station speaking live to hundreds to area school children in King Auditorium on his experiences in space. A 1995 graduate, he has now returned to alma mater to serve as Dean of Students at the Naval Postgraduate School.

When the Naval Postgraduate School welcomed its new Dean of Students (DoS) early this year, it was a face the campus had seen many times before. Capt. Alan Poindexter is not only an alumnus, earning a Master of Science degree in aeronautical engineering in 1995, he has also visited the university as a guest speaker and guest of honor on several occasions. With a couple of months now under his belt, he has settled into his new role, and looks forward to providing leadership to the 1,500 plus students on campus.

“I’m very glad to be back serving in this position,” said Poindexter. “I think it’s a great opportunity for me to lead and influence officers as they’re going to school here. I think I have a lot to offer them and I hope I can serve them and help them make their way through the school.”

A veteran NASA astronaut with two previous space shuttle flights, one as commander of STS-131 in early 2010, Poindexter attributed part of his success to the technical education he received at NPS.

“The technical knowledge and the technical education certainly assisted me,” said Poindexter. “I think a large part, though, was that I broadened my knowledge base. I learned about systems management, systems engineering and it allowed me to be more analytical in my thought process. So when I became a project officer and then an astronaut, I was able to think through problems and find a solution. My NPS education was instrumental in my follow-on tours.”

It’s no surprise that an NPS Dean of Students considers education to be an important part of an officer’s career path – in fact, Poindexter sums it up with one word.

“Critical,” he stated. “I think it’s critical. Graduate education is one of the key items in an officer’s bag of tools as he or she progresses in their career. Whether it be in engineering, management, business or one of the many other great degrees we offer here, it will serve the individual and the Navy or their service very well to have that capability and that background.”

Poindexter affirmed that his strategic goal was to continue to serve the student population. He said that it was his job to ensure that the students reach their educational goals and succeed, while at the same time making sure that their families are taken care of.

“My job is leadership,” said Poindexter. “I have to make sure that students make it through the school successfully and graduate on the other end with a diploma in their hand. But it’s also important not to forget to take care of your family and enjoy Monterey. We’re really blessed to be in such a great area, and so while we’re focused a lot on our academic future, we also need to remember that we’re in Monterey and can take some time off and enjoy where we are.”

In addition to the critical education and auxiliary benefits of a Monterey location, Poindexter said that NPS also offers a unique environment, an environment in which students get to interact with officers from different backgrounds.

Poindexter suggested that students make use of this unique environment by participating in courses outside of their curricula, as well as the Enrichment Week activities, and also to get to know their classmates from other services and countries. This is one of many ways in which NPS has evolved, Poindexter affirmed, while the school is a naval institution, it has greatly expanded its student base.

“Take advantage of the opportunity to interface with people from all over the world and from our other services,” said Poindexter. “Learn from their experiences as well as your own and broaden your network … you can learn a lot from them.”

In conclusion, Poindexter reiterated his feelings about being in Monterey, serving at the school, and hoped to convey one message to the students currently studying at the school.

“I’m really honored to be back here in this job working for the school and working for the students,” concluded Poindexter. “I have an open door policy and I would be glad to talk with or counsel anyone, and I hope that I can influence them in some small way.”