A Warrior’s Legacy – McChrystal Shares His Story During Unique SGL

A Warrior’s Legacy – McChrystal Shares His Story During Unique SGL 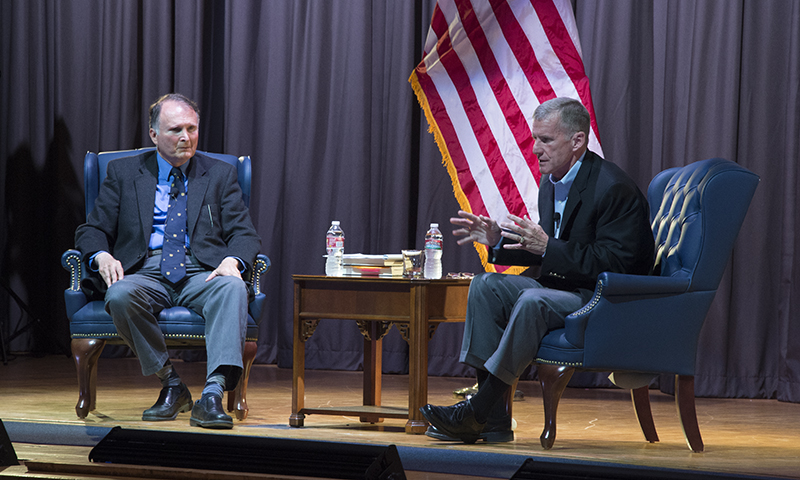 NPS Professor John Arquilla, left, and retired U.S. Army Gen. Stanley A. McChrystal, right, discuss McChrystal’s famed military career and his call for greater citizenship during a Secretary of the Navy Guest Lecture at King Auditorium, July 15. Arquilla likened the occasion to a meeting with Gens. Patton, Bradley or Eisenhower 70 years ago.

Former Secretary of Defense Robert Gates referred to him as “perhaps the finest leader of men in combat I have ever met.”

Retired U.S. Army Gen. Stanley McChrystal’s military resume speaks for itself. He led a coalition of 45 nations as the commander of U.S. and International Security Assistance Forces (ISAF) in Afghanistan, ran the Joint Special Operations Command, and chased SCUD launchers during the Gulf War, just to name a few highlights.

Since retiring from the Army, McChrystal has been writing books, teaching leadership at Yale University, and calling for greater citizen engagement through the Franklin Project. He sat down with Naval Postgraduate School (NPS) Department of Defense Analysis (DA) Professor Dr. John Arquilla, July 14, in the university’s King Auditorium to share his perspective with students, and to articulate his vision for the future.

“This is a really special occasion,” said Arquilla. “If this were 70 years ago, it would be like being able to get together with Omar Bradley, George Patton or Dwight Eisenhower.”

In these last nearly 14 years of conflict, Arquilla continued, Gen. McChrystal has been at the heart of U.S. campaigns and his presence on campus offers an incredible opportunity to NPS students. During the candid, and at times humorous discussion, McChrystal presented a series of snapshots from his past, sharing what Arquilla called his “origin story.”

The son and grandson of career military men and the oldest of six brothers, who all served in the military, and a sister who married a Soldier, McChrystal’s was the poster family of military families. “I [even] married a girl whose father was a Soldier and her brothers were Soldiers. You get the picture,” he quipped.

But to surmise from his upbringing that McChrystal was your typical, straight-laced, toe-the-line military man would be to dismiss much of what would ultimately lead to his success as a military leader. McChrystal’s career, from his oft-in-trouble days at the U.S. Military Academy at West Point to his penchant for challenging the status quo in Iraq and Afghanistan, reveals a man who was anything but typical.

He learned early on to think independently, and throughout his career, the advantages of doing so were re-enforced. In Western Iraq, McChrystal was charged with defeating Sadaam Hussein’s SCUD missiles, something that “proved to be unbelievably difficult,” he said.

“We studied the system and tried to go after the SCUDs. We weren’t hugely successful, we suppressed more than we destroyed, but it was very instructional for me,” McChrystal explained, because it was a strategic level operation with tactical complexity. The SCUD operation would lead McChrystal to adopt a systems approach to military tactics that would surface again at later dates in both Afghanistan and Iraq.

After 9/11, McChrystal led forces during Operations Iraqi Freedom and Enduring Freedom, conflicts that Arquilla called “campaigns in the world’s first great war between nations and networks.”

“I was put in command of Joint Special Operations Command (JSOC) in October of 2003 and went over to Iraq. [But] there was a group of people who said the war is over, JSOC should come home,” McChrystal said, but he disagreed with that sentiment.

“I toured all of the bases and was literally floored … We were just not organized to accomplish the scope of what we were trying to do,” he continued. “We were not focused. We were doing these short tours with good people and good intentions, but not the right people, at the right time, with the right level of seriousness.

“I said, ‘this is going to get ugly and it’s going to be a long fight.’ I felt that I could see where this was going … I came to the conclusion that we were going to have to take a very different approach.”

McChrystal again found himself following a systemic approach to strategy. “We were doing the best we could, going out at night and hitting targets, but the war kept getting worse,” he said. “The first thing that we had to do to was to create a consensus amongst the leaders to change and to galvanize ourselves to understand that we as a group had to figure out what we were going to do.”

Change would come … He and members of his leadership team were able to get units, operating largely independently due to technological shortcomings and isolation, to come together forming a single network that could face an enemy as a unified force.

McChrystal eventually came to the conclusion that he was not fighting a hierarchy, but rather a largely flat network that shared information, propaganda and other sources of information immediately over commercial networks. He witnessed this agile enemy react to what their peers were doing on an immediate scale, leveraging the expertise of others outside Iraq.

Once that realization was made, McChrystal said, he and his forces were able to counter it, and he would later draw upon those lessons learned while leading a 45-nation coalition in Afghanistan.

In Afghanistan, as in Iraq, McChrystal faced a local population that was frustrated and had lost confidence in both the coalition and in its own government. To complicate matters further, coalition allies became restless upon realizing that they had committed to something far more volatile than peacekeeping.

“We had a crisis in confidence … When people are unconfident they hedge their bets,” he said.

In McChrystal’s estimation, that same “crisis in confidence” is a large part of the calculus that affects the ability of regional and Western powers to counter the so-called Islamic State.

“It’s starting to be a lack of American credibility,” McChrystal explained. “I am not blaming this on anybody, but if your enemy does not fear you and thinks that you are not going to stay the course, then they are willing to put up with things for a long, long time.

“American credibility, sense of resolve and sense of ability are not what they once were. They're going to have to be rebuilt, not by a speech or a paper. . .  but by patient long-term action,” McChrystal continued.

McChrystal discusses many of his ideas in his latest book, “Team of Teams: New Rules of Engagement for a Complex World” in which he calls for a radical redesign of organizations.

“You cannot just empower people to go down and execute unless you empower them with an unprecedented level of information, what we call ‘shared consciousness.’ It’s transparency at a level that gives people a contextual understanding,” explained McChrystal.

Before answering questions directly from the NPS student audience, McChrystal touched on the importance of human capital and empathy, arguing that it is critically important to know people and to understand the background and information that they are relying upon to make decisions.

“The moment you think ‘they just don't get it,’ you are really in trouble,” he said.