NPS Professor to Join Astronauts in Return to Aquarius Habitat

NPS Professor to Join Astronauts in Return to Aquarius Habitat 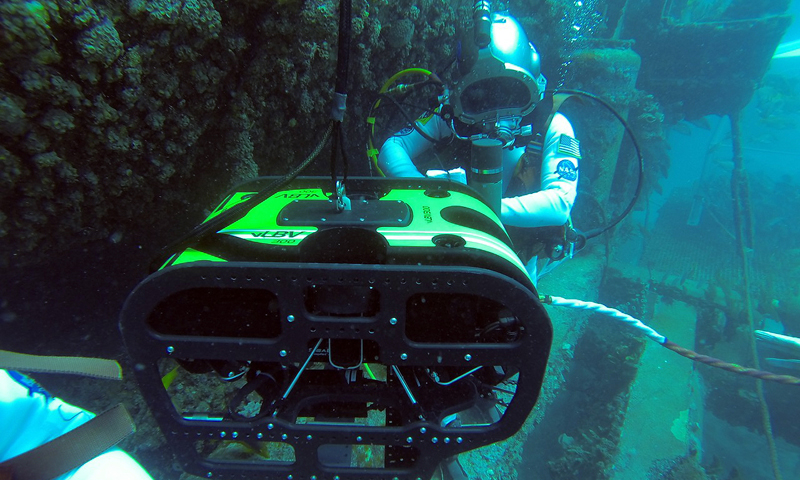 Researchers with NASA work with one of the Naval Postgraduate School’s unmanned underwater vehicles during a 2013 trip to the Aquarius underwater research facility off the coast of Florida. NPS Research Assistant Professor Dr. Noel Du Toit will be traveling to the habitat this summer to spend several days underwater in an effort to study human-robotic interactions in extreme environments.

Aquarius is a research habitat designed to study marine ecosystems over long periods of time through saturation diving and is used by NASA to prepare astronauts for the rigors and isolation of space exploration, in conjunction with NASA’s Extreme Environment Mission Operations (NEEMO) program.

“I will deploy with two astronauts for the second half of a 16-day mission aboard the habitat, where we will be looking at what aspects of human-robot interaction are useful to astronauts and, from a robotics side, what capabilities are required,” said Du Toit.

Du Toit will enter the habitat after training with astronauts at NASA’s Johnson Space Center and utilizing its Neutral Buoyancy Lab in conjunction with preparations for NEEMO 21 in July.

NEEMO expeditions have been on-going since the mid-90s. NASA shifts its focus from year to year depending upon its current mission set. This year, the mission will be designed to answer questions related to the human exploration of Mars.

“We have some very diverse objectives at the habitat,” Du Toit explained. “We want to continue work that we began last year integrating a hovering, autonomous vehicle directly with the astronauts as they execute their missions and support them with our robot assist technology.

“We are also pushing our level of autonomy, looking at things like autonomous docking and the mapping of complex environments so that we can efficiently and safely operate in them,” he added.

Additionally, the NPS team seeks to enhance its ability to launch and recover autonomous underwater vehicles (AUVs), as well as their ability to collaborate between different classes of vehicles using a common software architecture.

Du Toit is looking forward to the opportunity to work hand-in-hand with his astronaut colleagues to discern what capabilities they need and to what extent experts, like himself, can step aside and allow operators to deal directly with autonomous and semi-autonomous robotic assist vehicles.

“We have a mandate to look at manned-unmanned system integration. We want to build upon our work last year, which focused on diver-robot interaction through exercises like tool delivery and object recovery. We are starting to test more and more of those kinds of capabilities.

“And we want to get away from the need for subject matter experts to deploy these systems. We need to know what it is that human operators really need so that the vehicles can be used by non-experts in a way that is helpful and adds value to human operations in extreme environments,” Du Toit explained.

Du Toit hopes that by living with the astronauts aboard the Aquarius habitat, he will gain important insights toward fulfilling this mandate and meeting his other research objectives.

“I am going to gain such a different perspective,” Du Toit said. “Normally, in unmanned underwater vehicle research, you program a vehicle and let it go and then analyze the data it collected. In this case, I will be diving 4-8 hours per day with the vehicles and the astronauts they are assisting.”

This year’s Mars-centric scenario within the habitat nests well with Du Toit’s work at NPS. The communication delays inherent to Mars exploration provide an ideal environment for testing his theories and the vehicles they support.

“What makes Mars challenging are the communication delays inherent to space travel. To communicate with astronauts on Mars, it would take a signal 15-20 minutes to travel there and back.

“From a robotics point of view, you have these different delays that require different levels of autonomy. If we deploy a vehicle in a dynamic environment, we can’t wait five minutes or 10 minutes between when we send something and receive something back. We need a lot more autonomy. On the other hand, if you have humans closer by, you change the equation again. There are all of these little nuances that are extremely interesting to study,” explained Du Toit.

He notes that in the absence of autonomous systems, NASA must have “humans in the loop” who plan each of their rover’s [and other robotic system’s] movements in very small increments. That process results in long mission cycles that despite their complexity, may move a rover mere inches.

“Obviously, we want to get away from that. Looking forward to a potential Mars mission, you may have humans nearby on the surface, or aboard an orbiter in space. Parts of your mission may be conducted in real time while other parts will have to contend with communications delays. When faced with that reality, how you do use robotics technologies?” Du Toit asked.

The Aquarius habitat is uniquely suited to answering those questions and others. The habitat’s support staff are able to control communications and set up communication delays between mission control and the astronauts, as they conduct operations beneath the sea.

“They isolate the astronauts, or in this context aquanauts, entirely and run the whole mission as if they were in space. The astronaut’s whole day is scripted using exactly the same tools that NASA uses for any other mission. They conduct extravehicular activities and science missions are supported just as they would be on a regular NASA mission,” said Du Toit.

As the Navy and its sister services increasingly incorporate unmanned systems into their operations, they will have to face scenarios similar to Du Toit’s.

“Many of the unmanned platforms in operation now rely upon very good, very high-bandwidth communications. What if you don't have that? How does it change your capabilities? How do you handle things?” Du Toit asked. “Maybe you have local communications, but you don't have reach back beyond that, which is similar to the whole ‘Martian bubble’ dilemma that future Mars explorers will face.”

As Du Toit prepares for his departure to Houston to begin his Aquanaut training, he has high-hopes that he and his colleagues will find some of the answers to these questions beneath the sun-soaked waters of the Florida Keys.

For more information about the research and the Aquarius habitat, check out NPS’ Human-Robot Interaction website.