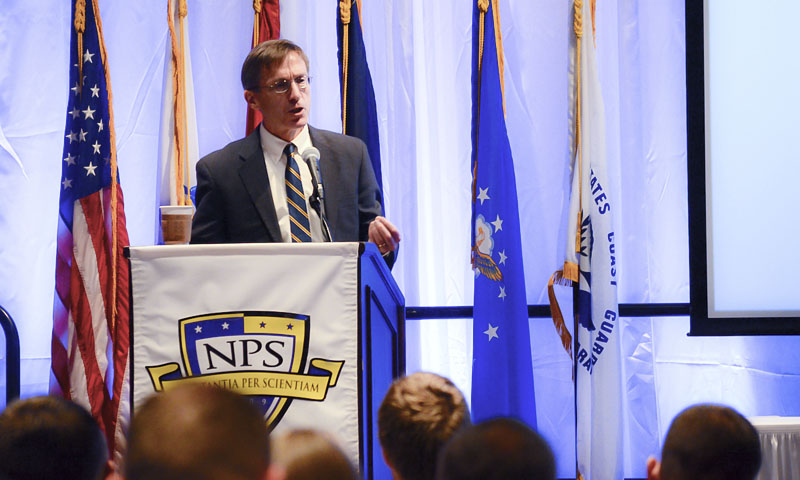 Assistant Secretary of the Navy for Research, Development and Acquisition the Honorable Sean Stackley addresses attendees at NPS’ 13th annual Acquisition Research Symposium, May 4. The symposium brings together leading acquisition professional from around the world.

University President retired Vice. Adm. Ronald A. Route welcomed a banquet hall filled to capacity with the nation’s leading acquisition professionals, and touted the importance of what he called “sharpening the spear” – NPS’ commitment to honing naval officers with the education and skill sets required to serve at the tip of the nation’s defense spear.

Assistant Secretary of the Navy for Research, Development and Acquisition the Honorable Sean Stackley served as keynote speaker at the symposium. Stackley highlighted efforts to break through bureaucracy, and to streamline the defense acquisition process while calling upon policy makers to see the bigger picture.

“Please [congress], no more policy, no more rules and regulation. We have plenty of policy, we need practices,” Stackley said. “Process is important, but it’s about product. It’s about putting weapons systems in the hands of Sailors and Marines around the world and giving them the confidence to do their jobs.”

Stackley also pointed to regulatory red tape as an impediment to the acquisition process, noting some of its more frustrating consequences.

“Admirals report to the Pentagon after solving the problems of nations with their fleets only to come to the pentagon and learn that they do not have the authority to approve a travel voucher to attend a conference,” explained Stackley.

And while Stackley bemoaned the reality of an acquisitions work place where “lawyers out number engineers 10-1” and where “policy makers believe you can bend the laws of physics with a policy change,” he also called for optimism and shared a number of acquisition success stories spanning early achievements in the wake of WWI that led to the future successes of the USS Lexington and Saratoga during WWII.

After WWI, the Washington Naval Treaty limited the construction of new ships to just 27 tons. But forward thinking acquisitions professionals successfully petitioned for a further 3,000-ton exception on certain types of vessels. That exception allowed for the building of two new battle cruisers, the Lexington and the Saratoga, which would become naval workhorses over the next 15 years as history-making aircraft carriers, noted Stackley.

“When you sort through all the details, a story emerges – extraordinary things are possible when congress, the Navy and manufacturers work together to defend the nation,” said Stackley. “Step by step we have been able to update our systems in a manner that has made us the most capable fighting force in the world today.”

Stackley also offered a bit of a reality check to policy makers about the cost associated with maintaining an organization as complex and far reaching as the U.S. Navy.

“The Navy is capital intensive … That is true of Navies all over the world,” said Stackley who balanced his remarks by quoting former Chairman of the Joints Chiefs of Staff ret. Adm. Mike Mullen who warned that “the greatest threat to our national economy is our national debt.”

Stackley also appealed to attendees and policy makers to heed the lessons of history and not lose sight of the industrial base necessary to acquire important naval systems.

“Affordability should not be confused with inexpensive,” said Stackley. “[The Navy] is also capital intensive from an industrial perspective. We have to keep a close eye on the health of our industrial base, if we are to rely upon them.”

Earlier, retired Rear Adm. James Greene who serves as the chairman of NPS’ Defense Acquisition Program, summed up his expectations for the event and called upon attendees and students to prepare for the 14th symposium through both attendance and paper presentations next year.

For Pakistan Navy Cmdr. Abdul Basit Rafique, NPS has been such an institution. An international student currently at NPS, he is deeply involved in the financial side of defense acquisition in his nation.

"The Defense Acquisition Symposium provides a great opportunity to listen to some currently researched and thoroughly practiced acquisition principles and concepts directly from the ‘horse’s mouth,’” said Rafique. "As an international student, it helped me to better understand the workings of the U.S. Department of Defense Acquisition Management setup. I will definitely carry some worthwhile and modern concepts back home.”