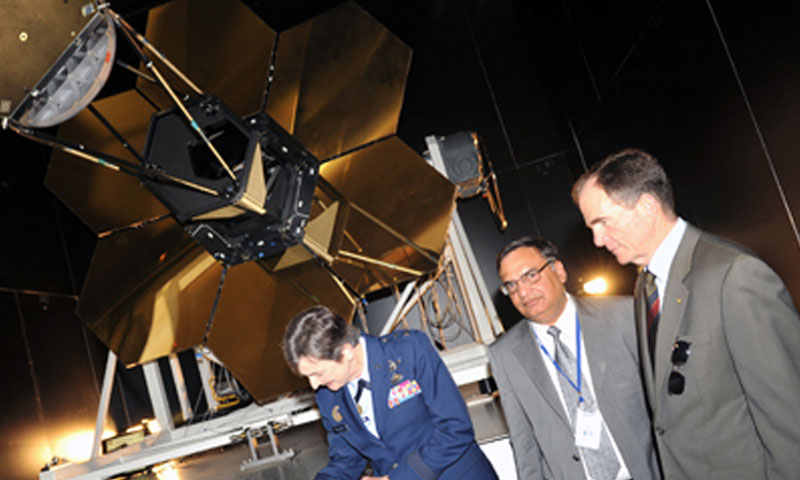 Then Maj. Gen. Ellen Pawlikowski, Commander of the Air Force Research Laboratory (AFRL), placed the final signature on the Memorandum of Agreement (MOA), completing the process to officially establish an Adaptive Optics (AO) Center of Excellence (CoE) for National Security at the Naval Postgraduate School.

On May 2, 2011, then Maj. Gen. Ellen Pawlikowski, Commander of the Air Force Research Laboratory (AFRL), placed the final signature on the Memorandum of Agreement (MOA), completing the process to officially establish an Adaptive Optics (AO) Center of Excellence (CoE) for National Security at the Naval Postgraduate School, the only one of its kind in the country.

The MOA, an agreement between AFRL, NPS, the Office of Naval Research (ONR) and the National Reconnaissance Office (NRO), establishes a partnership to develop the advanced technologies that are critical for reconnaissance and directed energy missions within the Department of Defense (DoD) and the Intelligence Community. The center also benefits the DoD by educating students in these same adaptive optics and high-energy laser technologies, while also allowing researchers to develop technologies for risk reduction.

NPS President Dan Oliver remarked that the CoE marks an auspicious beginning of the work of educating our future leaders and is an exciting research opportunity for NPS. “I am proud that NPS will be part of this and am pleased to be partnering with NRO, AFRL and ONR,” said Oliver. “This is a big day and a big deal for us.”

Pawlikowski, who just recently pinned her third star, remarked that signing the MOA establishing the AO CoE is critical to the success of accomplishing the AFRL mission. She said, “The Air Force can’t do it alone and certainly has not cornered the market on accomplishment and capabilities. Entering into this collaborative agreement is important for our role within the Air Force and collaborating with the Navy and NRO is part of accomplishing that mission. The opportunity to exchange ideas and share is absolutely critical to our nation.”

Distinguished Professor Brij Agrawal of the Department of Mechanical and Aerospace Engineering played a major role in the establishment of the center. Serving as the AO CoE Director, Agrawal says he anticipates that it will have a powerful impact on NPS and future DoD systems.

“For NPS this is critical. It is a great honor and recognition that this campus has a Center of Excellence in Adaptive Optics for National Security,” he remarked. “It really brings NPS ahead of other institutions in that field. We have the unique testbed, a unique facility here at NPS.”

“This CoE establishes NPS as a focal point for the kind of technologies important for future military capabilities. The SMT [segmented mirror telescope] and directed energy test bed will both be major contributors to that,” added retired Navy Capt. and Senior Lecturer Al Scott. With directed energy, the goal is the development of a highly-focused, high-energy laser with the capability of shooting down a target such as an incoming missile – an advanced technology that many Naval leaders believe can revolutionize ship defense.

Each participating organization has its own distinct area of interest. NRO is focused on imaging, while ONR is interested in directed energy, and AFRL is interested in both. The unique role of NPS is that it currently has students in master’s and Ph.D. degree programs studying all of these. Scott added, “The fact is that we are an academic institution but we are also in DoD, so we have a good connection with users of these technologies, which is a unique aspect of NPS.”

From a DoD perspective, Agrawal notes that there are two primary benefits to having this CoE at NPS. First, this Center of Excellence will educate our military officers and DoD personnel in very challenging technologies through both classroom and hands-on experience. When these individuals go back to work in their respective fields, they will be better able to develop these technologies, as well as provide risk reduction in the development of future imaging satellites and high-energy laser systems. Agrawal notes that one of the main strengths of NPS is the invaluable opportunity for students to get that hands-on experience and multidisciplinary education and research.

Second, Agrawal adds, is that since NPS is an educational institution, it has the unique ability to cooperate and partner with DoD, industry, research labs and other universities.

The cornerstones of the AO center are the multi-million dollar segmented mirror telescope, which NPS acquired in December 2009, as well as development of its unique high-energy laser testbed. In current ops, Agrawal explains, AO is used on airborne lasers (ABL) with the objective to correct the laser’s beam due to atmospheric aberrations. A beam can be highly focused as it travels through space, but then scatters as it enters the atmosphere, which diminishes its energy. AO takes care of the disturbance by compensating for that atmospheric distortion. 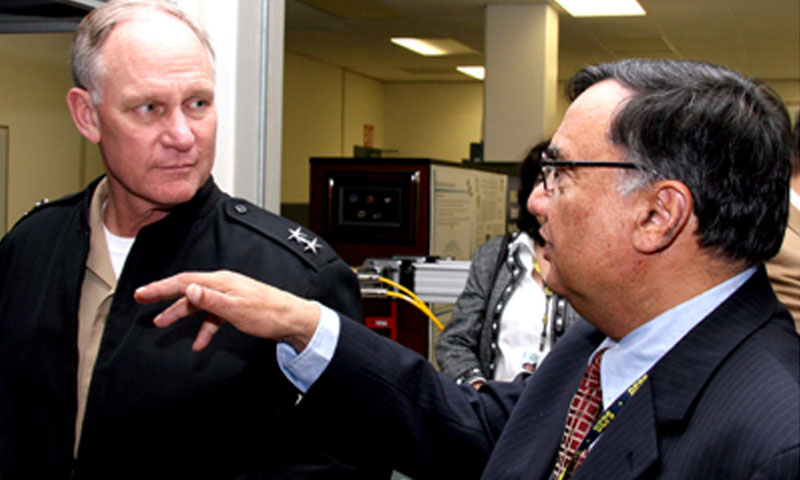 Rear Admiral Nevin P. Carr, Jr. Chief of Naval Research Director, Test and Evaluation and Technology Requirements meets with NPS Distinguished Professor Brij Agrawal of the Department of Mechanical and Aerospace Engineering while visiting the university to sign a Memorandum of Agreement (MOA) to officially establish an Adaptive Optics (AO) Center of Excellence (CoE) for National Security at the Naval Postgraduate School.

For higher orbits, we need larger telescope mirrors for the same image resolution, however, you do have the limitation on the launch vehicle when considering both the mass and the volume – the telescope must be light, stowed, launched and then deployed. This creates surface errors in the mirror, resulting in degradation of image quality.

Agrawal adds that Adaptive Optics techniques can be used to correct the mirror surface. Adaptive Optics sensors can be used to measure aberration in the optical beam due to mirror surface distortion, and the errors can be fed by using control laws to actuators to correct the segment alignments and surface errors. It is a very complex optics, structures and control problem.

Due to future DoD funding constraints, cost and schedule are major considerations for these systems. Agrawal notes that the goal of the center is to solve as many problems as possible through applied NPS student and faculty research. The center hopes that by using these technologies, we can have a robust design of these systems, thus reducing development cost by reducing analyses and testing.

Agrawal adds that the establishment of the Adaptive Optics Center of Excellence was, without question, a team effort.

Chairman of the Department of Mechanical and Aerospace Engineering, Dr. Knox Millsaps and Executive Vice President and Provost Leonard Ferrari played a lead role in getting the initial funding for us, Agrawal says, providing resources for the first AO center labs. This funding was supported by local Congressman Sam Farr, Agrawal added.

Once initial funding was in hand, “It was the Provost who decided to fund the AO area,” Agrawal said. “Dr. [Karl] van Bibber and I went out and met people and kept working for a year to make it all happen. NPS has identified this area of AO for the future.”

The culmination of all of this hard work, Agrawal notes, represents a major goal for him. When he came to NPS 21 years ago, after working for 20 years in the communications satellites field at INTELSAT, many of his colleagues there considered this change as his mid-life crisis, he says in jest. He notes that he did, however, have two objectives. “The first was to make space systems engineering at NPS the best in the country. I think that we achieved that several years back,” he said.

His second was to establish a Center of Excellence in multidisciplinary AO research to bring NPS ahead of other institutions in that field. “With this AO CoE being established, the second objective is now fulfilled,” he said with a proud smile.