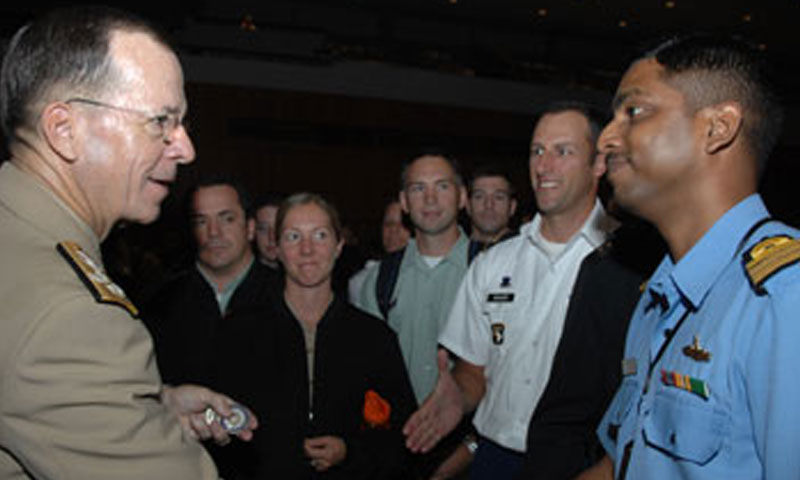 One year after his induction into the NPS Hall of Fame, Admiral Mike Mullen, Chairman of the Joint Chiefs of Staff (CJCS), spoke to NPS students, staff and faculty on August 10 as part of the Secretary of the Navy Guest Lecture Series. Mullen is the 17th CJCS and previously served as the 28th Chief of Naval Operations from 2005 to 2007. He graduated from NPS in 1985 with his Master’s of Science degree in Operations Research, and recalled his days of attending lectures in King Auditorium and walking the campus as an officer planning to screen for a Command position.

“I was in Operations Research and the reason I enjoyed that in particular was because of its application of real world problems,” said Mullen. “I was able to take my education and apply it to the things that were important to me from a career standpoint. I think that is the case in many peoples’ lives.”

“Annapolis was one such for me, and another has been the Naval Postgraduate School,” he noted. “It made a huge difference in my life and my career and one of the reasons I come back here … It’s exceptionally well lead, and it’s important to give back because this institution gave me so much.”

Mullen was assigned the Chairman of the Joint Chiefs of Staff on October 1, 2007 having served in the Navy for over 40 years. Expressing a combined understanding of the needs of the joint forces, and the inevitability of change into the future, Mullen spoke about the challenges that lie ahead for men and women in uniform and the best way to prepare for those challenges. He emphasized vigilance in Middle East affairs, the health of the forces, and prioritization in strategic planning as key areas of focus now and moving forward. 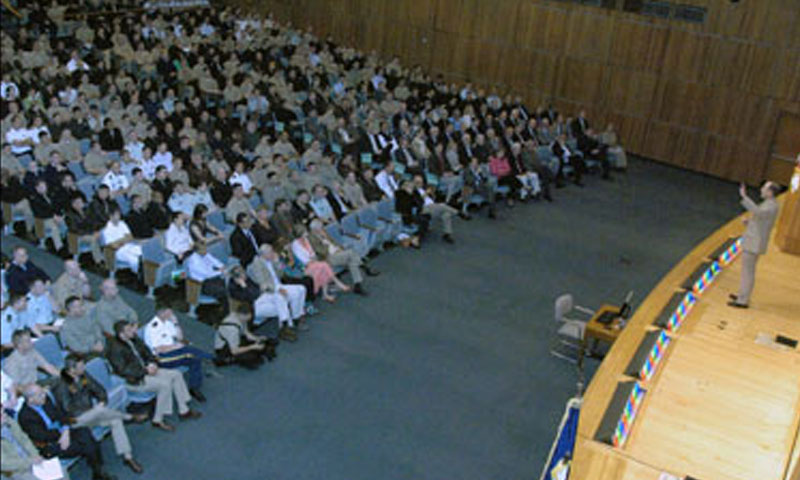 Chairman of the Joint Chiefs of Staff, Adm. Mike Mullen, addresses a packed house of Naval Postgraduate School students, staff and faculty as part of NPS’ Secretary of the Navy Guest Lecture Series in King Auditorium.

“My wife and I just spent all day up at Fort Lewis in Washington where 17,000 soldiers are returning from the wars this year,” said Mullen. “The real challenge we have is to meet the needs of the soldiers who have been under this enormous pressure … as well as their families who have endured that same stress and challenge. How we do that and handle the health of our force and the challenges that are there has a great deal to do with not just succeeding in the wars that are around, but also in the future of our military.”

In addition to supporting the soldiers at home and abroad, Admiral and Mrs. Mullen are well known for their advocacy for the benefits and needs of the military family. He has recently voiced a strong opinion in favor of removing the ‘yes/no box’ on military paperwork that gives the service member the choice to have family contacted by the service while he or she is deployed. This leaves many loved ones behind without the support and assistance that they may need from the military. In his lecture, Mullen maintained that position and emphasized that support for families is instrumental in the success of the armed forces.

“We’ve been a Navy family for over 40 years and the family support has always been critical in military service. And I have seen it grow to a level that is unprecedented since these wars started. And it’s actually very simple for me [to say that] we would be unable to carry on our missions without the incredible support that we have had from our families,” noted Mullen. “I believe the family readiness issue is directly tied to our military readiness not just now but in our future in ways that we really haven’t thought through in the past. So we are focused on that, investing in that, making sure that our families are every bit as ready to handle the challenges of our missions as our military members." 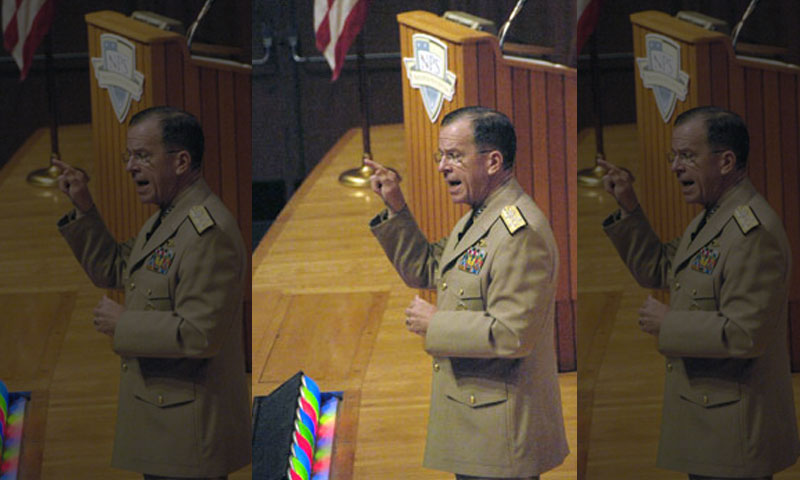 Chairman of the Joint Chiefs of Staff, Adm. Mike Mullen, stresses how much he values the diversity of the NPS student population during his SGL, not only with its strong representation from all the U.S.

Echoing sentiments from a speech he gave the day before at Joint Base Lewis-McChord, Mullen emphasized the issues of change within the forces and the strengthening of garrison leadership, both areas that impact mission preparedness and success. Despite some weaknesses in the early 2000s, Mullen noted, the leadership within the forces is structured and better prepared to handle the challenges both home and overseas.

In his role as the principle military advisor to President Obama, Mullen sees first-hand how different services must unify in support of a common mission. As he addressed the diverse student population packed into King Auditorium, Mullen noted the importance of maintaining unity throughout the forces and establishing a familiarity within each service, and about what the other branches do.

Similarly, equally important, he noted, is establishing relationships with other militaries around the world and working together on common issues. Part of that understanding can come from the international community represented on the NPS campus, Mullen noted, where opportunities for students to broaden their experiences and understandings are all around.

“When I think about our military today, as I do our country, we have moved well beyond any single military or any single country doing it alone,” said Mullen. “We’ve got to have partners in the future. As I look at the war in Afghanistan right now, the 46 countries who have military personnel supporting the efforts in Afghanistan … that’s a huge statement of support – not just military support but political support, and proper prioritization of the dangers that exist in that part of the world.”

“It’s a real privilege to serve today,” he concluded. “We are in great shape but I don’t take that for granted. We’ve got to focus on being the right military for the future as well.”