Afghan Theatre Conference Aims to Impact Strategies in the Field

Afghan Theatre Conference Aims to Impact Strategies in the Field 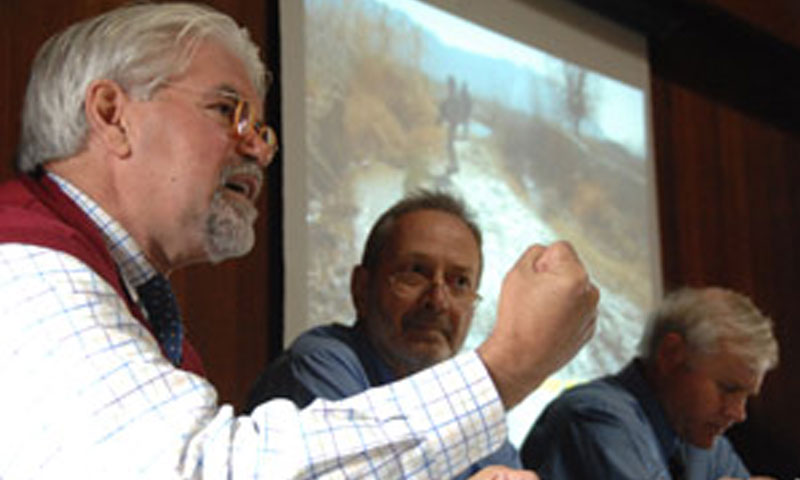 Thomas Johnson (left), Director of NPS’ Program for Culture and Conflict Studies, offers compelling remarks on the challenges faced by Defense and State Department officials in Afghanistan while Werner Schleiffer of the Conference on Non-Governmental Organizations and NPS Senior Lecturer Hy Rothstein listen in.

”Are we faced with something unique in Afghanistan, something that challenges our entire strategic paradigm?”

That question, posed by NPS Defense Analysis Professor John Arquilla, challenges fundamental assumptions in the wide-spread discussions on Afghanistan today. Such challenges were frequent during a recent Afghan Theatre Security Strategies conference, an intimate brainstorming session that brought together top academics, policy experts and development strategists to bring new ideas and approaches to the table.

The team – led by Dr. Karen Guttieri of the Global Public Policy Academic Group (GPPAG) together with Dr. John Arqullla and Dr. Hy Rothstein of Defense Analysis – will compile the results of their two-day workshop into a report on possible strategies, potential outcomes and fresh perspectives and will deliver that report to DoD and State Department officials currently in the midst of a major re-evaluation of strategy in one of the world’s most significant regions.

According to Arquilla, NPS in the past has indeed proved influential. “With Iraq, we brought together a good group, some NPS, some elsewhere, but all experts in political, economic or strategic venues. We brainstormed, outlining a range of possibilities,” which Arquilla added did have some impact in decisions made and strategies utilized in the war in Iraq.

NPS Provost Dr. Leonard Ferrari convened group of experts with faculty from GPPAG and the Defense Analysis department in hopes of having that same kind of impact. “The intellectual capital at NPS is truly unique. It creates an environment that not only provides expertise, but also provides a forum where expertise from other organizations, countries and disciplines can come together and engage in this kind of lively discourse. NPS not only has the ability to provide this kind of advice to decision makers, we have a responsibility to do it,” Ferrari emphasized.

For a full day and a half of the two-day conference, leaders in policy, strategy and the regional experts from NPS met with other research universities, NATO, the UK, Geneva and more. This session followed a previous NPS collaboration with the UK Defense Academy on some of Afghanistan’s most difficult questions. In opening the meeting, Dr. Guttieri noted that the workshop involved two major goals, “policy-oriented research that is our responsibility as scholars and members of an international community” and “the creation of research-informed educational content.” In a special afternoon session on day two, educators from NPS, the Geneva Centre for Security Policy and the U.S. Army Peacekeeping and Stability Operations Institute applied the insights from the previous day and a half to the agenda for an educational program on leadership in complex operations scheduled to take place in Geneva later this year.

Dr. Karen Guttieri of NPS’ Global Public Policy Academic Group engages Afghan Theatre conference attendees in discussion on the region’s most critical questions. Guttieri, with Drs. John Arquilla and Hy Rothstein of Defense Analysis, led the two-day workshop and will compile the results into a report on possible strategies, potential outcomes and fresh perspectives in one of the world’s most significant regions.

The United States aided an insurgency in the initial intervention in Afghanistan, and now the challenge remains to determine what is the primary objective of the Afghanistan operation? Are they narrow humanitarian goals or broader institution-building ambitions? Who are the “we” when setting these goals? What are acceptable risks? What timelines govern these ambitions? The questions were varied, and the opinions equally so. The integrated civilian-military campaign plan signed by Chief of Mission Karl W. Eikenberry and the Commander of U.S. Forces in Afghanistan General Stanley McChrystal had been released just a few weeks before the meeting, suggesting that the U.S. goal was to defeat Al Qaeda and its allies as well as safe havens in Pakistan, and to prevent their return. The group considered these goals in terms of the 20th century French strategist Andre Beaufre’s categories of importance, resources, and freedom of action. “Why would we choose a direct or an indirect approach?” asked Professor Hy Rothstein.

Scott Gartner, Professor of Political Science and Director of the International Relations Program at UC Davis, presented a stark choice between the “great game” that Russia and Britain played over Afghanistan that kept the nation weak as a buffer zone, or nation-building to strengthen Afghanistan. Observing that the great game was one of the root causes of the 1853 Crimean War, the question of Afghanistan’s independent state strength is an important one. As the meeting was taking place, the elections in Afghanistan were looking more and more problematic, leading to a discussion on the viability of Afghanistan as a state in the international system. Many participants argued for a minimalist approach, while some argued against taking a path that precluded the democratic option in the long run.

Werner Schleiffer, Senior Executive Coordinator for the Conference of Non-Governmental Organizations emphasized capacity-building over nation-building, adding, “The ideas are there, the links are there in the villages. We simply must find ways of channeling money into systems that the Afghan people control.”

“If there is a number one take-away from this,” another participant noted, “it’s that a grassroots approach fits perfectly with the developmental initiatives” discussed at the conference.

Thomas Johnson of NPS’ National Security Affairs department and Director of the Program for Culture and Conflict Studies, reiterated the need to provide security to the Afghan people. “What does the enemy want to see,” he asked rhetorically. “What they don’t want is anything that makes the life of the Afghan people better. There is competition, not only for who rules, but who provides a secure environment for rule. If we don’t supply security, the Taliban will.”

But Johnson also added that the current approach to Afghanistan is simply not working. “We need revolutionary change in Afghanistan,” he stressed. “Sometimes I think we are more connected in Monterey to what the Afghan people want than they are in Kabul.”