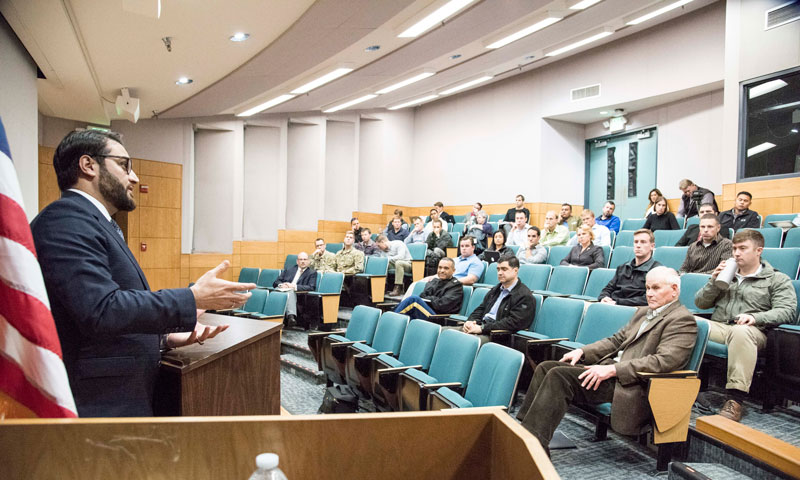 Dr. Hamdullah Mohib, Afghan Ambassador to the United States, offers a guest lecture to an audience of NPS students, faculty and staff in the Mechanical and Aerospace Engineering Auditorium, Jan. 10.

Dr. Hamdullah Mohib, Afghan Ambassador to the United States, delivered a thought-provoking and insightful guest lecture to an audience of NPS students, faculty and staff in the Mechanical and Aerospace Engineering Auditorium, Jan. 10.

During the briefing, Ambassador Mohib provided a glimpse into the current state of affairs in Afghanistan, where he has served as the nation’s senior diplomat to the U.S. since September 2015. The Ambassador is very active in online communications and social media, and stated that he is resolute about redefining his country’s story, especially in the U.S.

His visit to the university was, as he described it, an important pilgrimage to meet the men and women who fought in his country, and who are still training side by side with Afghanistan’s Special Forces. Many of the students in attendance, most from the university’s Defense Analysis (DA) department, have indeed spent many years in Afghanistan.

“First, I want to thank all of you who have served in Afghanistan, as it has given us the opportunity to stand here before you,” said Ambassador Mohib.  “As many of you know, Afghanistan has gone through a very difficult period in history, with four decades of wars that have crippled our infrastructure,” he continued, “and more importantly, our human resources. Regardless of recent victories against terrorist elements in our country, a great many other problems are challenging us,” he said.

The Ambassador said there is still mistrust of the central government among the 34 provinces and the voting districts within them, even though some success in curbing corruption has been realized.  He also said that health care, education, transportation, and of course, access to clean water are top priorities that the country must address, as they all tie back to security. “We see our continued partnership with the U.S. and others in the alliance to form a stable Afghanistan. We see this as a beacon of hope for the region,” he said.

Another point Ambassador Mohib made in the context of preventing extremist ideology was a story he related about a young man who was captivated with Osama bin Laden’s extreme form of Islamism. When bin Laden was finally brought down, the young man became depressed and mourned his death. However, later the young man found other writings that bin Laden had released, and saw that his words and actions were absolutely contrary to Islam. It was then he realized that bin Laden was not a leader for Muslims ... If anything, he was destroying the image of Islam.

“My point is that our message is important,” the Ambassador stressed. “We can eliminate terrorists, but if we don’t eliminate the idea of terrorism and have credible voices for people to understand and hear, we’ll not be able to get rid of the idea. And we all know that it is a lot harder to control the flow of an idea than it is the flow of people.

“Today, Afghanistan is fighting the idea of terrorism and the idea of extremism … But, the voice and the fight that is against the idea is ours alone. It takes diplomacy and it takes the creation of alternative voices [through rebuilding a social infrastructure] and trust with the Afghan people,” said the Ambassador.

Ambasssador Mohib ended his talk by offering a quote from Afghanistan’s President, Ashraf Ghani, speaking to the Afghan Joint Session of Congress. “Ordinary has escaped us. Ordinary is what we desperately want ... In Afghanistan, we want to be able to do ordinary things, where we can save for the future of our children and to be able to travel back to the villages where we came from, walk the streets without worry and feel free.”