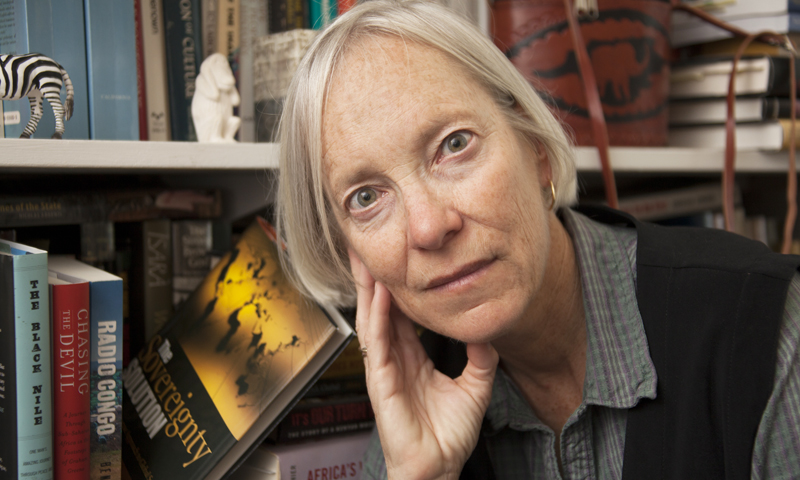 A recent addition to the Air Force Chief of Staff’s official reading list, NPS Associate Professor Anna Simons’ book, “The Sovereignty Solution” – coauthored with two former students – explores a U.S. foreign policy based upon the extension of the classic American virtues of principled non-interference and self-governance.

“The book grew out of a project that I conducted for the Office of Net Assessment (ONA) at the Pentagon,” said Simons.

Simons’ project was based on the Newport Summer Studies program that Director of ONA, Andrew Marshall, and former Secretary of the Air Force [and NPS Hall of Fame member] James Roche, have been running since the mid-80s.

“[During the Newport Summer Studies], a group of academics would be pitched a problem and the attendees would have 10 days to create a briefing … I pitched the idea that a group of our officers could do the same kind of thing over the course of a quarter,” said Simons.

In response to Simons’ request, ONA sponsored a seminar that brought several participants back to Washington to brief their results. The 10 participating officers drew upon their combined expertise and operational experience as members of the U.S. Special Forces, civil affairs, psychological operations, and military intelligence communities.

“The problem we were given was to explore what sort of strategy the U.S. would have to have in place if the U.S. was blindsided by a national-level strategic problem … Something like the first detonation of a nuclear bomb that would cause the U.S. to have to rethink its strategy overnight,” said Simons.

“The book is the product of our seminar addressing that challenge, and offers a new foreign policy direction for the United States that takes the classic American principles of ‘don’t tread on me’ and ‘to each its own’ and marries them together,” continued Simons.

“The Sovereignty Solution” advocates what some might describe as a libertarian approach to foreign policy. The authors create a foreign policy based on principled noninterference and a “you be you” philosophy that they say would result in decreased attacks upon U.S. interests.

Simons and her co-authors describe a live-and-let-live philosophy that respects foreign sovereignty, which would make future conflicts less likely. But she acknowledges that attacks may still occur, and in the event of an attack, the authors argue for a decisive response.

“If you have to fight wars, they should be short and decisive. In our rubric, we would have never gone to war in Iraq, and Afghanistan would not have been a drawn out war either … We would have made a simple ultimatum to Mullah Omar, give up Al Qaeda are you are finished, that’s the end of your regime. There would be no nation building, no rebuilding, Afghanistan would then have to come together and rebuild itself.”

The authors defend their position by insisting that long wars are divisive and easily exploited.

“Foreign policy is the easiest thing that adversaries can use to divide us. We have never remained undivided over long wars. A clever adversary should want to embroil us in a long drawn out war,” said Simons.

Also important to the authors’ view of military operations is the issuance of a formal declaration of war.

“The United States has issued formal declarations of war 11 times, and has followed each declaration with a victory. Not a single declaration of war has been issued in the past 60 years, yet the United States has pursued political objectives through military force almost continuously. The correlation should be striking. Declarations of war appear to be the proven method for reaching political objectives through military means.”

Another theme of “The Sovereignty Solution” is the authors’ insistence that aid and nation building are not only ripe for corruption, they infringe upon sovereignty itself.

“Look closely – the aid industry not only enables governments to avoid having to fulfill obligations to their citizens, but it also fails to impel them to have to live up to their sovereign duties. Or, to put none too fine a point on it – aid not only corrupts, it undermines sovereignty absolutely.”

Simons’ lack of belief in nation-building operations stems from her view that only a local actor will have the public support and legitimacy necessary to create a government that will be accepted by that nation’s citizenry. Nation building, she argues, forces the U.S. to choose sides and commits American personnel and resources to persons and organizations that may not share American interests.

“As soon as you empower someone else, you have essentially placed yourself over a barrel where you have to protect the person you have empowered,” said Simons. “The only government that is likely to be legitimate in the eyes of the people is a government that rises amongst its own people.”

Simons and her co-authors contend that the U.S., in its role as an international policeman, hinders rather than supports the creation of states that are accountable to their people.

“There is an argument that we actually make things worse by leading people to believe that we are going to rescue them … The international community gives deference to heads of state, but there is no accountability – leaders get away with murder figuratively and literally,” Simons said.

“We argue that if there is a problem that arises in a region, then it is up to regional neighbors to take an interest. We need to let people know in advance that we are not going to come in and save them,” she added.

Simons and her co-authors also make several arguments regarding how the U.S. could disentangle its national security interests from its national interests, which the authors argue are really more akin to business interests.

“There are no such things as truly national interests apart from our physical security. Should the U.S. government be picking and choosing only certain kinds of business interests to support? We say forget all of that, businesses are free to operate wherever they choose, but the U.S. government should neither assist nor rescue businesses wherever they operate,” said Simons.

The authors believe that by focusing on what makes America unique, and by promoting greater, “American indivisibility – where we don’t try to be all things to all people,” that the U.S. government will be able to focus its resources on problems at home while at the same time respecting the right of other nations to find solutions to their own problems in their own manner.

“We argue for preserving what makes us unique as a people. At the same time, if you push liberalism to its logical conclusion, then we Americans should also want to offer total respect to others who choose to live differently from us,” said Simons.