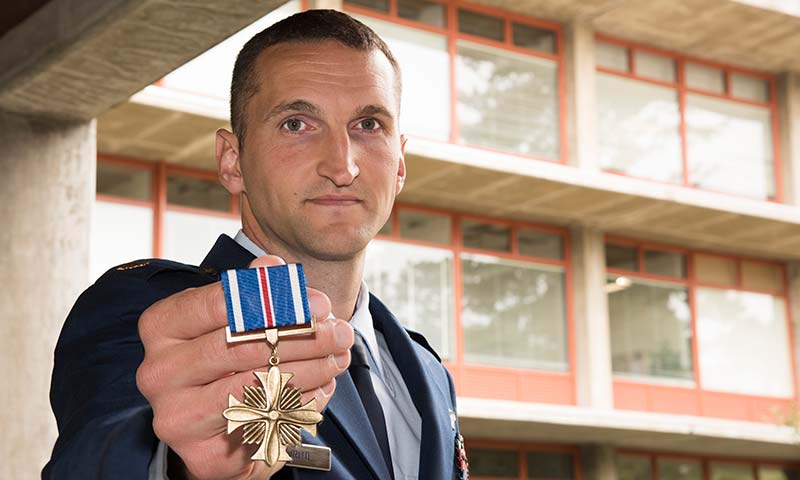 U.S. Air Force Maj. Philip Garito holds the ribbon of the Distinguished Flying Cross following its presentation by NPS President retired Vice Adm. Ronald A. Route during a ceremony, May 22.

NPS student U.S. Air Force Maj. Philip Garito was presented with the Distinguished Flying Cross during a special ceremony in King Auditorium, May 22, with Garito’s family and fellow Air Force officers in attendance.

Garito received the award for his actions on July 25, 2016, while serving as the Fire Control Officer for the 4th Expeditionary Special Operations Squadron in Afghanistan. A group of combined, U.S. and Afghan Special Operations troops had engaged the enemy and were under persistent enemy fire from seven different locations.

Garito guided his AC-130U gunship into a close-air-support position in support of friendly forces on the ground. According to official reports, the American and Afghan troops had pushed some of the enemy into a valley when more than 50 insurgents ambushed them, firing from multiple fortified positions using the advantage of higher terrain and taking cover in buildings that surrounded them.

Garito’s AC-130 gunship came to their rescue, firing round after round while also coordinating missile strikes, bomb runs, and other attacks from assisting helicopters. Weather was also a factor to overcome as aircraft had to operate at a continually lowering ceiling as clouds formed around their targets.

The operation was considered high-priority, engaging dozens of Islamic State militants who massed against 114 friendlies, using ground structures as protection. At the end of a 12-hour battle, 31 insurgents were killed. Friendlies evacuated with only injuries.

“Every time you go to support a ground force, it is unique and you really hope it’s almost benign, that nothing is going to go wrong,” Garito recalled. “But in this particular situation, we’re up overhead knowing that we will be called on for fires.”

Garito, humble and soft spoken, says he attributes his team’s success to the trainers and evaluators that ensure the gunship air crews operate to their fullest ability, even under great stress. And while not every mission was like what he and his fellow aircrew encountered that day, in his words, “It’s what they train to do, as if it were the real thing.”

“That mission was during my twelfth, and as far as I know, my final deployment to Afghanistan after almost eight-years as a fire control officer,” said Garito. “I owe a lot to one of the more seasoned gunners on that crew who carried us through the day,” he added, while making a determined point to recognize his entire crew on the AC130 – U.S. Air Force Maj. Kevin Beaulieu; Capts. Jonathan Rodgers, Bryan Heidtman and Dustin Lewis; Technical Sgts. Benjamin Narro, Dale Trant and Daniel Christenson; Staff Sgts. Justin Knase, James Keltner, and Alex Almarales; and Senior Airmen Kyle Linebarger and Shane Hayes.”

With the receipt of the Distinguished Flying Cross, Garito now has one more significant achievement in common with a member of his family. Although not mentioned by him but by his wife, Shawna, Garito’s maternal grandfather, James Marvin Hayes, was also the recipient of the Distinguished Flying Cross for his heroism during WWII in the Army Air Corps.

“Oddly enough, my grandfather was part of the invasion forces that liberated Sicily,” said Garito. Garito and his grandfather are the only two members of his immediate family to join the Air Force ... His father retired as a Lt. Col. in the Army.

Garito, a native of Lawrence, Kansas, is a student in the NPS Department of Defense Analysis.