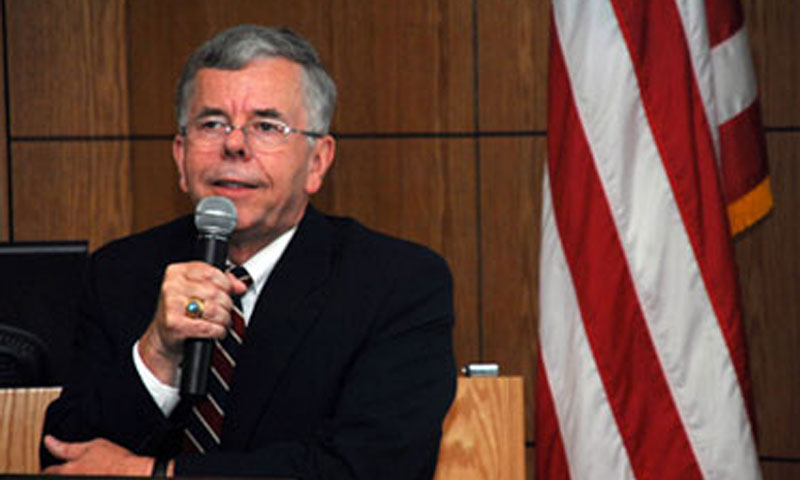 Deputy Assistant Secretary of Energy, and Director of the Advanced Fuel Cycle Program in the Department of Energy’s Office of Nuclear Energy, Carter “Buzz” Savage offered his knowledge and experience in nuclear energy use, research and administration to the Naval Postgraduate School community through an NPS Graduate School of Engineering and Applied Sciences (GSEAS) Distinguished Lecture Series held at the Monterey, Calif., campus in June.

What if you found out you were only using about one percent of the oil and gasoline that you put into your car, and discovered the rest was just shipped off to sit and decay for the next 100,000 years? Simply wasteful, yes, but that’s almost exactly the case with nuclear fuel today.

Deputy Assistant Secretary of Energy, and Director of the Advanced Fuel Cycle Program in the Department of Energy’s Office of Nuclear Energy, Carter “Buzz” Savage offered his knowledge and experience in nuclear energy use, research and administration to the Naval Postgraduate School community through an NPS Graduate School of Engineering and Applied Sciences (GSEAS) Distinguished Lecture Series held at the Monterey, Calif., campus in June.

“Without building new nuclear facilities, even with the capability to extend the life of current plants by 20 years, the U.S. would be without nuclear energy by around 2045,” Savage said.

While the focus of his presentation was Yucca Mountain, Savage spent much of his time describing DOE’s nuclear research and development objectives, including the concerns and benefits of switching to a closed fuel cycle – a nuclear fuel cycle in which the fuel is reprocessed and recycled.

“With an open cycle the fuel is used, but it’s not spent,” explained Savage. “Right now we get about a one percent yield from the uranium we mine. Reprocessing and recycling into fast reactors could increase uranium utilization by up to two orders of magnitude – an incredible yield. There are environmental benefits as well, with reprocessing reducing the amount of time it takes fuel to come back to a radiotoxicity level comparable to natural uranium.”

Currently the U.S. does not conduct recycling or reprocessing of nuclear fuels primarily because of proliferation security concerns.

A different concern, however, is the long term storage of used or spent fuel. Yucca Mountain in Nevada was designated in the Nuclear Waste Policy Act to serve as the sole geologic repository site in the United States – a secured, long-term site with predetermined geological hardiness to contain and control high-level nuclear waste while toxicity levels diminish over time. After more than 25 years and billions of dollars of research and site planning, the plan to use Yucca Mountain has now been scrapped, based in part on the assurance of Secretary of Energy Steven Chu that current short-term solutions will be adequate through the next few decades of research.

“We realize that we know a lot more today than we did 25 or 30 years ago,” said Chu during an interview with MIT’s Technology Review, May 14, 2009. “The NRC [Nuclear Regulatory Commission] is saying that the dry cask storage at current sites would be safe for many decades, so that gives us time to figure out what we should do for a long-term strategy.”

On the lighter side of his discussions at NPS, Savage, an NPS alumnus and 20-year veteran of the Navy’s nuclear propulsion program, talked about his parallel careers between the military and civilian nuclear communities.

“I didn’t know about the commercial side of nuclear energy until I left the military,” said Savage. “With all of the security during the Cold War we were probably working on the same things in the Navy that the civilian labs were working – or we’d already tried it I should say. Now, having had the two careers I see a lot of parallels and a lot that could be collaborated on.”

Outside of the lecture hall Savage was busy with visits and introductions with NPS President Daniel Oliver, Provost and Executive Vice President Leonard Ferrari, Vice President and Dean of Research Karl van Bibber, and hosts GSEAS Dean Sivaguru “Sri” Sritharan and Lawrence Livermore National Laboratory Chair Professor Craig Smith. During his visit, Savage was designated a Distinguished Alumnus, a rare honor extended to NPS graduates that have made notable contributions to the nation.

“We’re looking at having an energy forum where people from around the world can bring their solutions for energy use in peacekeeping operations and humanitarian relief – how do you get energy real quick,” said Ferrari. “We asked Mr. Savage if he’d be interested in being involved, and he seemed happy with that. Of course he’s involved with the issues surrounding nuclear energy, proliferation and disposing of fuel, so this might give us a chance to talk about new systems in research labs. A lot of people think nuclear energy will be the solution to clean energy once security issues can be worked out.”

Savage is responsible for leading and integrating all of the Department of Energy’s research and development activities associated with advanced nuclear fuel cycles, which includes fuels, reprocessing, safeguards, modeling and simulation, systems analysis and university programs.

For more information about the Department of Energy go to http://www.energy.gov/. Technology Review’s interview with Energy Secretary Steven Chu can be found at http://www.technologyreview.com/business/22651/?a=f