Alumnus Honored by ASNE for Excellence in Naval Engineering

null Alumnus Honored by ASNE for Excellence in Naval Engineering

Alumnus Honored by ASNE for Excellence in Naval Engineering 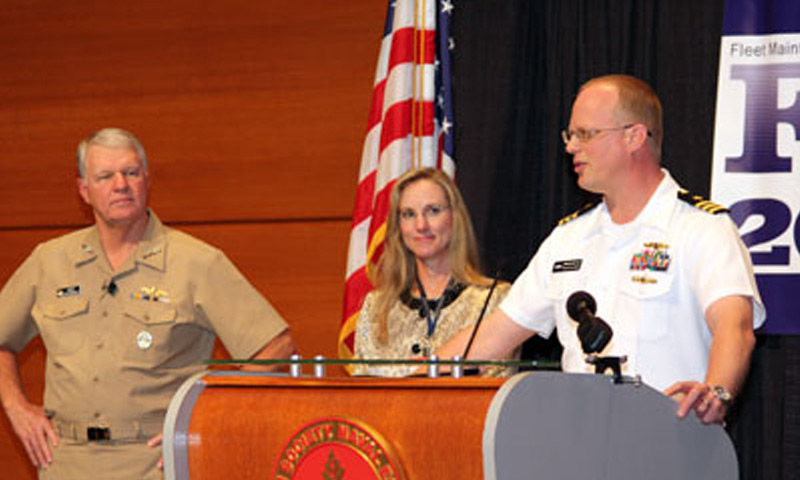 Cmdr. Bradford Bittle, right, addresses an American Society of Naval Engineers (ASNE) symposium audience after being presented the 2009 Claud A. Jones Award for significant contributions to naval engineering by Chief of Naval Operations Admiral Gary Roughead, left, and ASNE National Council President Kathleen Hinton, center. The award, named for Medal of Honor recipient Admiral Claud A. Jones, is given annually by ASNE to a fleet or field engineer who has made significant contributions to improving operational engineering or material readiness of the maritime forces.

Bittle, awarded for his exceptional performance and achievement while serving as Force Modernization Officer for Commander Naval Air Force and as Chief Engineer of USS Abraham Lincoln (CVN 72), attributes much of his engineering success to the values and lessons learned while at NPS.

“As an Engineering Duty Officer, graduate level education in technical fields such as electrical engineering, mechanical engineering, space systems engineering, or computer science is mandatory for continued service,” said Bittle.  “A master’s in an engineering field has provided me a wide and deep tool kit from which to draw from to help solve the difficult issues facing the Navy today.”

Bittle’s course of study at NPS strengthened his engineering proficiency, and allowed him to hone broader skills and earn qualifications that ultimately led to winning the Jones Award.

Most of my jobs have been more systems engineering oriented, but having the master’s degree from NPS provided me with the credentials to be an active participant in aircraft carrier maintenance and surface ship and aircraft carrier modernization process improvements, he said.

Commenting on the importance of graduate-level education, Bittle describes critical thinking skills as a must-have for engineers and successful military officers.

“Critical thinking, a questioning attitude, and an appreciation for what can be possible and what is pure science fiction are the skills that my master’s degree has given me,” he said.  “The problems facing today’s military and the military after next require a cadre of officers who are able to apply critical thinking to enact achievable solutions. The graduate degree provides the tools required to address these with solutions that are both effective and lasting.”

ASNE, the seventh oldest technical society in the United States, is a professional engineering society for engineers, scientists and allied professionals who conceive, design, develop, test, construct, outfit, operate and maintain complex naval and maritime ships, submarines and aircraft and their associated systems and subsystems.  Bittle, a member of ASNE for more than 10 years, recommends this organization for engineering professionals and students studying in any field of engineering.

“Without question, I would recommend becoming a member of ASNE,” said Bittle.  “There is a robust local chapter at NPS. It is a student led section but it has the potential to be the most productive section in the nation.  NPS produces master’s level Naval Engineers of all flavors; electrical, mechanical, structural, systems and space systems.  Membership is also a benefit to those in the acquisition fields such as business and logistics.”

Current NPS faculty recall Bittle as an astute student, with the capability and aptitude to excel in naval engineering.  Dr. Bob Ashton, an associate professor in NPS’ Electrical and Computer Engineering department remarked, “He was an excellent student and I encouraged him to continue on a career path in the power electronics/systems area. His thesis concentrated on a hybrid inverter for possible application to electric propulsion motor drives for the Navy.  It would have been nice to have him as a Ph.D. student.

“We had more than one incident of trouble while attempting to prove the hybrid concept on the available hardware in the Power Lab,” added Ashton, noting a specific memory of working with Bittle.  “In the end after many hours of work, Brad was able to obtain some very good results from the hardware that matched the modeling performed.”

Studying and living in the Monterey community afforded Bittle time to focus on military credentials as well as spend time with family and friends. Offering incisive advice to current and potential NPS students, Bittle recommends balancing time spent at the university between professional obligations and time with loved ones.

“Enjoy your time at NPS and maximize your learning opportunities at work, but do not neglect time with family and self,” he said.  “There is no better tour of duty to sharpen the saw than the Naval Postgraduate School. The friendships made at NPS will last you your entire life.”