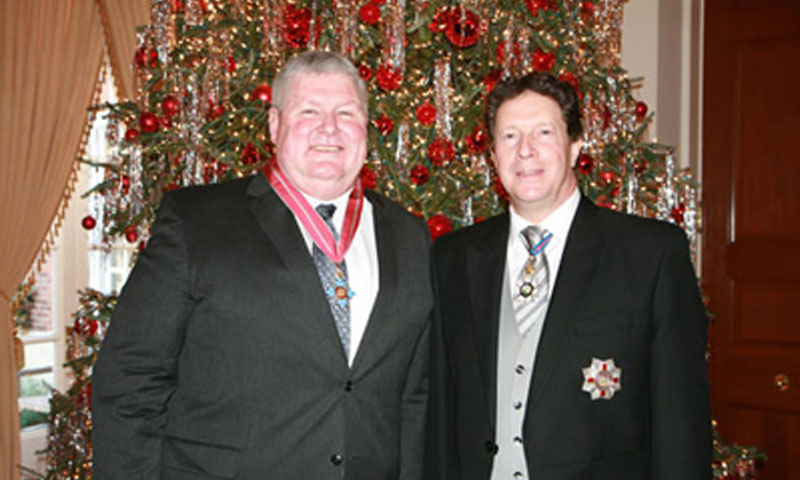 Retired Rear Admiral John D. Butler (Engineering Acoustics, ‘86, left,) was named an Honorary Commander of the Most Excellent Order of the British Empire.

The British Ambassador, Sheinwald, presented the award during an investiture ceremony at the British Embassy in Washington D.C., on December 9.  Sheinwald commented that Butler had a very successful career in the Navy, and that his current position as vice president of the Fleet Ballistic Missile program for Lockheed Martin Space Systems Company, ensures the continued utilization of his skills and dedication to submarine programs.

Butler received an MS in Engineering Acoustics from NPS in 1986.  He noted that the professors in the Physics Department and Electrical Engineering Department laid the foundation for his growth and application of engineering principles for his career in submarine design, build and repair.  He feels fortunate that his current assignment with Lockheed Martin, which began in September 2005, has allowed him to work as close as it does with the U.S. Navy’s Strategic Systems Programs and also continued his close working relationship with the Royal Navy and Ministry of Defence. Butler remarked, “I always treat the UK boats with the same dedication and hard work that is the hallmark for our work on the USN submarines.  It is truly a special relationship that exists between our two countries.”

Butler added, “When the British Embassy notified me that Her Majesty The Queen had awarded me the CBE, I was caught by total surprise and was deeply honored.  As an overseas national, I had never considered being inducted into a British Order of Chivalry as a possibility.  As the British Ambassador read my citation at my investiture ceremony at the British Embassy, it was evident as to the magnitude of the honor that Her Majesty The Queen has bestowed upon me ... It was one of the proudest days of my life.”