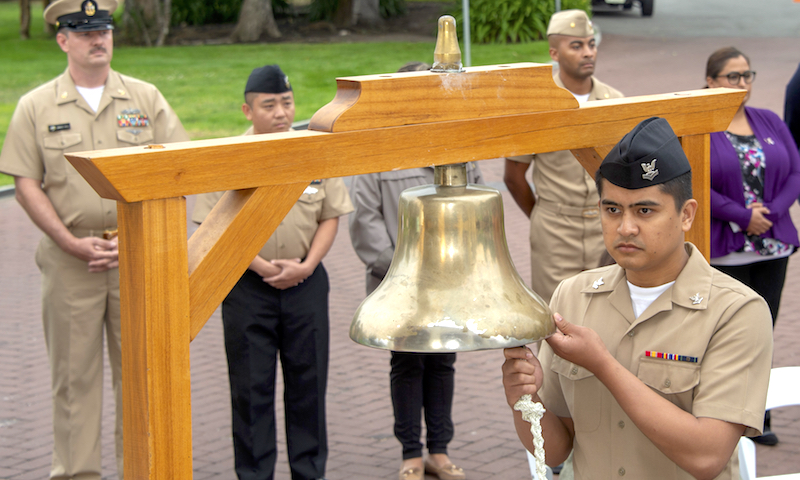 Yeoman 2nd Class Johnmark Rivera rings the bell following the reading of each of 199 names, representing the Navy Sailors who died while on active duty over the past year, during the Bells Across America for Fallen Service Members ceremony held at the front of Herrmann Hall, Sept. 27.

A bell tolled for each of the 199 Sailors who died while on active duty over the past year during the third annual “Bells Across America for Fallen Service Members” ceremony, Sept. 27. Naval Support Activity Monterey joined Navy installations throughout the continental United States during the simultaneous memorial for the fallen.

“This is a day set aside for all to recognize and honor those who have lost a son, daughter, husband, wife, mother or father while serving their nation in the United States Armed Forces. This memorial commemorates the contributions, commitment and sacrifices made by our fallen comrades,” said Capt. Rich Wiley, NSA Monterey Commanding Officer, during his opening remarks.

Following the commanding officer’s opening remarks, a mix of 20 civilian and active-duty military staff members took turns reading the alphabetical list of 201 Sailors’ names.  One-hundred ninety-nine of the Sailors died between Sept. 1, 2017 and Sept. 1, 2018.  Two additional names were added to the list because their families were invited to attend the memorial.  After each name was read, YN2 Johnmark Rivera rang a bell.  A final succession of four bells was rung for all fallen service men and women who have served in the armed forces of the United States.

“The Navy Gold Star program designed the ceremony to recognize and deliver on the Navy’s commitment to surviving families of fallen service members. The event coincided with Gold Star Mother’s and Family Day, which is observed the last Sunday in September,” said the event’s organizer, Vanessa Anderson, Educational Services Facilitator at the Fleet and Family Support Center.

Five Gold Star Families attended the event in honor of their loved ones, the father of Chief Special Boat Operator Zacharias E. Buob from San Jose; the sister and niece of Aviation Ordnanceman 1st Class Albert J. Sarkis III who traveled from Sacramento; and the parents of Chief Petty Officer Ernest Lopez Jr. who traveled from Modesto.

The Navy Gold Star program was established on Oct. 1, 2014, to help provide continuing support for surviving family members of fallen service members. The program honors Gold Star Families throughout the year by hosting events that pay tribute to their lost loved ones, providing resources and opportunities to connect with one another and to their Navy family. From the surrounding area, three Navy Gold Star families came to connect and remember their Sailors.