Annual Symposium Puts Technology at the Forefront of Acquisition

null Annual Symposium Puts Technology at the Forefront of Acquisition

Annual Symposium Puts Technology at the Forefront of Acquisition 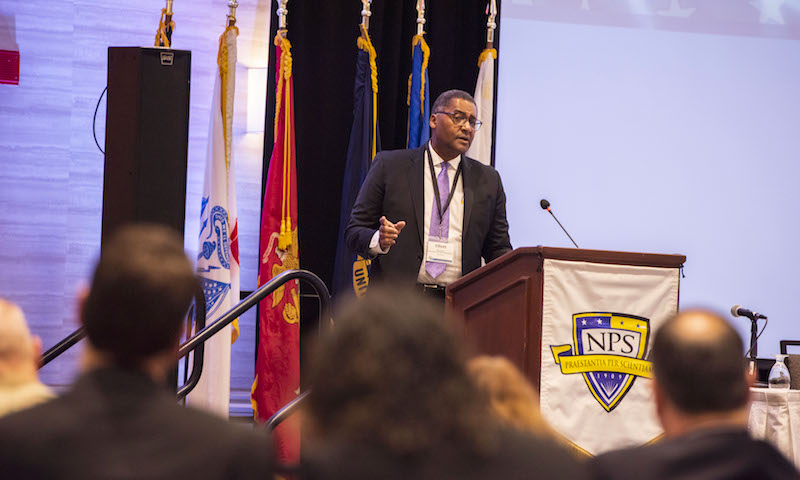 Elliott Branch, Deputy Assistant Secretary of the Navy for Acquisition and Procurement, offers the keynote address during day two of the annual Acquisition Research Symposium, May 9. Branch discussed the modern era of rapid technological change, and its impact on the acquisition community.

Seaside, Calif. - For two days in May, hundreds of acquisition professionals from government, academia and industry across the nation gathered in this arcadian city on California’s central coast to make the sinews of America’s military might become more leaner, tougher and agile.

Hosted by the Naval Postgraduate School (NPS) and sponsored by the Department of Defense, the 16th annual Acquisition Research Symposium: Creating Synergy for Informed Change at the Embassy Suites, May 8-9th, explored the latest innovation and research in the field across a range of panel discussions, including cybersecurity, autonomous systems, data analytics and international defense.

The symposium comes at a precipitous and crucial moment, noted NPS President retired Vice Adm. Ann Rondeau as she welcomed the participants.

“In the Information Age, we are at the point where we can bring data analytics towards saving money and making cost avoidance so that we can put more of the nation’s treasure towards the end effect that would have this nation safer and more secure all the time,” she said.

“In my view, you who are in this room today is one important way we can deliver lethality and win the fight,” Rondeau added. “If not us in this room, then who will make those important leadership passages forward in understanding how to acquire better and therefore deliver better?”

Driving the event was NPS’ Acquisition Research Program (ARP), which since 2003 has served as the locus for innovation, creative problem-solving and on-going dialogue in the acquisition world. Nestled within the NPS Graduate School of Business and Public Policy, ARP produces over 80 acquisition products each year and maintains a repository of more than 2,100 unclassified publications, stimulating research into acquisition management, workforce development and policy research.

“Our research program continues to be a major component of the critical thinking skills in the current and future acquisition workforce,” remarked Acquisition Chair retired Rear Adm. James Greene. “What is not fully understood is that almost all of [our students] end up in the acquisition world, not just business school people but people in engineering or science.”

“They all have payback tours when they leave here,” Greene continued. “And where are these tours? They’re in the acquisition business, so NPS is probably the biggest source of manpower for the acquisition workforce.”

As Rondeau observed, these acquisition professionals are now at the cusp of a new era which will place new kinds of demands on the field.

Understanding this context is key to navigating these new waters, and the presentations and sidebar conversations at the symposium demonstrated that the assembly of participants is well underway, according to keynote speaker Elliott Branch, Deputy Assistant Secretary of the Navy for Acquisition and Procurement.

“Most of us in this room - especially those who have more gray hair than we do darker - are trained to fight wars based in physics, computer science and advanced signal processing ... the physics of radar and sonar, the miniaturization of computing components, the exponential growth of computing power, precision munitions, communications networks and GPS,” he said. “We kind of pat ourselves on the back because we won that war, and that informs how we do business today.”

Those same technologies, however, have crept into the commercial sector, and as trade has exponentially increased throughout the world, they are now accessible to both friend and foe alike, and these have broadened their potential applications.

“Tomorrow’s war will have things like ‘stochastic terrorism,’ where we use social media to potentially demonize a person or a group of people, which triggers an unknown person at an unknown time to commit an act of terror like we saw with the San Bernardino shooting,” Branch warned. “The next war will include terms like ‘computational propaganda,’ where we use big data so that a granular profile of who you are, what you do, how you think and who you associate with can be used to fine tune a message to you personally.”

“What we’re really talking about is how those of us in this room who were very, very successful in fighting that physicists’ and computer scientists’ war have to think about how we turn our system to fight the war that those who study the history of sociology and history have yet to name,” he said.

The U.S. Navy, according to Branch, has already begun to adjust course for this sea change.

Under the aegis of the nation’s 76th Secretary of the Navy, the Honorable Richard V. Spencer, a renewed emphasis has been placed on the people, processes and capabilities which can make this happen. Spencer and Chief of Naval Operations Adm. John Richardson have laid down the marching orders for this in a string of published initiatives, including A Design for Maintaining Maritime Superiority 2.0 and Education for Seapower.

“We understand that no weapons system is effective in any way, shape or form without the Sailors and Marines that deploy it and think critically about what effect that system has, that in order to get them to think critically about this environment, we need the right processes and we need to bring capabilities to the fight,” Branch said. “We realize that by leveraging the power of our people, processes and capabilities, we are increasing the fielding capability and the lethality of our Navy.”

“That’s the job the Secretary of the Navy has given to research, development and acquisitions to do,” he concluded. “That translates to delivering and sustaining lethal capability and capacity, increasing agility, acquire and modernize, provide affordability into every single deal and contract we make and building a workforce to compete with.”

The acquisitions community – and NPS – have the wheel well in hand.