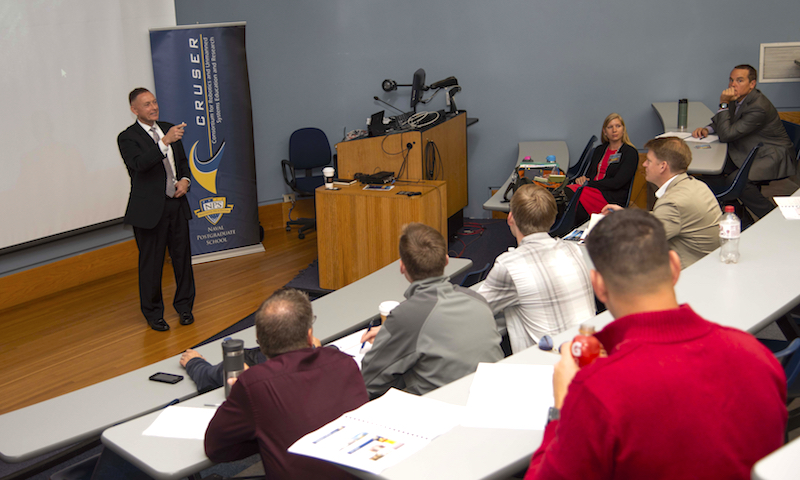 Retired Marine Corps Brig. Gen. Frank Kelley fields a question from the audience during his keynote presentation for the latest Warfare Innovation Continuum (WIC) Workshop for Cross-Domain Operations, Sept. 18. The WIC is a coordinated effort to execute a series of cross-campus education and research activities built around a central theme of unmanned systems utilization in future conflict.

The WIC is a coordinated effort to execute a series of cross-campus educational and research activities that share a central theme, this year focused on the application of emerging technologies in future cross-domain operations. The event brought together NPS students and other participants with seasoned mentors from across the fleet, industry and academia to explore in detail this futuristic scenario of naval warfighting.

“What we wanted to do was create an environment where we combined early career engineers with our own officers and put them in a setting where they would access, using subject matter and technical expertise, the value of the technology we would present to them,” said NPS Chair of Systems Engineering Analysis retired Navy Capt. Jeff Kline.

“What happened was, we ended up with a unique blend that uses the techniques of wargames and design thinking, as well as base concept development, and the synergy that has occurred is just fantastic,” Kline added.

The workshop’s keynote address entitled “Crossing the Valley of Death” – a colorful title referring to the challenge of bringing innovative ideas to market – was delivered by Vice President of Defense Acquisition University (DAU), retired Marine Corps Brig. Gen. Frank Kelley. As Vice President of DAU, Kelley overseas the development and expansion of the DAU curriculum in alignment with the DOD’s goal of creating a primary learning institution for acquisition.

“For you students at NPS, you will never forget your time here,” said Kelley. “Having time to think with other people, some of which think like you, and more importantly some of which don’t at all, is one of the most important moments in your time in the military.”

Kelley went on to discuss his experience as an acquisition officer in the Marine Corps and his experience of attempting to bring new technologies, such as unmanned systems and artificial intelligence, to different military communities and their reactions.

“You are here building the very thing that you need to get across the valley of death, and you are building it right now ... a network,” said Kelley. “Your network is your most important asset to achieve the goals that you set for yourself ... Don’t let your time here be wasted.”

Now in its 11th iteration, the WIC correlates with a series of classes to create a model where the participants are actively thinking about the potential for unmanned and autonomous systems, helping drive concepts around campus and seed the development of new technologies.

“Over the past three days, we brought warfighters, civilians from the warfare center, academics and industry together for a design thinking experience to try to craft a way we may use unmanned and autonomous systems in the future,” said CRUSER director Dr. Brian Bingham. “This is part of the way that CRUSER fulfills its mission to bring unmanned systems technology and operations to NPS students to think about how it can be used in the future.

“It is absolutely critical that we bring together a diverse group of people who have different backgrounds and ideas,” he continued. “Robotics and unmanned systems are not something that live in one particular domain, and we have to have those inputs in order to be heading in the right direction.”

Throughout the workshop, students and participants had the opportunity to interact with a group of subject matter experts throughout the fleet and industry serving as mentors.

“The format of the conference requires students to interact with these senior folks as part of their project teams ... so it gives them the opportunity to come and interact with our students first-hand,” said NPS Field Experimentation Director Dr. Ray Buettner. “People talk and exchange business cards and now a lieutenant knows a GS-15 in a lab somewhere who can work together on future problems and exchange viewpoints.”

“This allows us to connect what we do with upcoming capabilities,” added Craig Walker, a project manager for the Naval Undersea Warfare Center serving as a mentor for the workshop.

“The direction of the fleet is not only expressed top down from senior leadership, but bottom up from people who are going to form the future and have the ideas in order to tailor our products to current and future fleet needs,” he noted, adding that the interactions provided by the WIC are invaluable in their ability to highlight some of the service’s most critical challenges.

Participants broke up into six teams to tackle specific problems and solutions that would arrive from a fictional scenario known as “Global War 2030” which saw the students exploring complex challenges revolving around maritime war in both the eastern Mediterranean and South China Seas.

“These interchanges are where the real exchanges between our students and the engineers occur,” said Kline. “They have their tasking, they have their scenario, they have their technologies and everyone brings different ideas from their own experiences to the table to explore the questions in front of them. Then, at some point, they vote on the best ideas and further develop them.”

For Andrew Schicho, an engineer from the Naval Surface Warfare Center, Panama City, his team’s conflict revolved around China taking over a foreign nation, occupying it and the U.S. military is trying to enter that contested zone and remove those forces.

“We spent the entire day generating concepts on how one might disable an unmanned set of systems,” said Schicho. “We came up with ideas ranging from bio kelp with censors hidden in it; garbage patches filled with censor heads; UUVs that attacked one another; drones that exploited networks; and, anything along the lines of science that we could provide in the next 10 years for this scenario.

“The biggest thing I am taking away from this is networking,” Schicho added. “We had a lot of opportunities to meet with other commands, with academics, and even some industry representatives.

“Now I have this CRUSER network of people who I can reach out to with ideas that are maybe not organic to our own,” he continued. “I don’t have much robotics experience but now I know people in that field who can help us transition technologies across that valley of death and into the hands of the warfighter.”