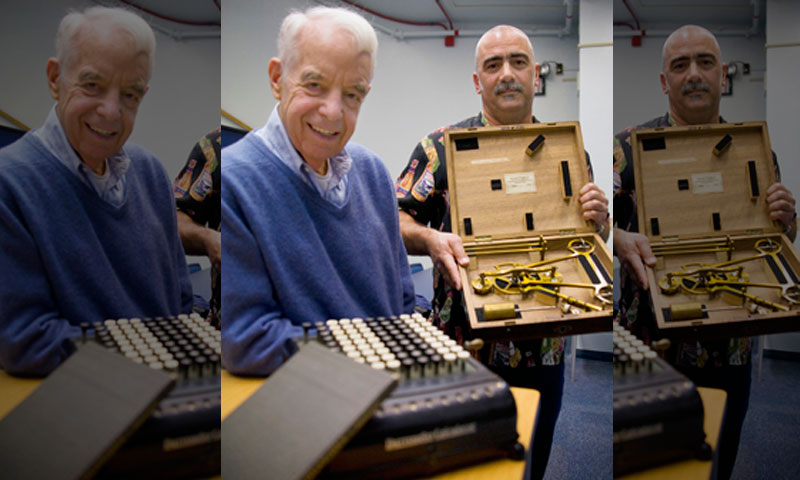 Chairman of the Applied Mathematics Department Carlos Borges regaled faculty, students and staff on “A Century of Mathematics at the Naval Postgraduate School” in a special lecture Apr. 14 attended by emeritus faculty who go back far enough to have lived some of the historic events mentioned in the talk.

Beginning with NPS’ origins in a June 9, 1909 General Order establishing the School of Marine Engineering at the U.S. Naval Academy, Borges took the audience on a whirlwind tour of 100 years of NPS math, applied statistics/operations research and computing history in a single hour.

“The School of Marine Engineering was established in Isherwood Hall, named for Admiral Isherwood, an expert on steam and Civil War admiral for the North,” Borges explained. “Isherwood founded the Academy’s steam engineering curriculum in the 1870s, which became the model for Mechanical Engineering departments throughout the United States.”

“On October 31, 1912, General Order 233 then established a Postgraduate Department at the Naval Academy, separate from the Academy’s other departments and independent of its Academic Board, instructing that the work of its faculty and officer students ‘shall be original or useful lines of inquiry of direct value to the Navy,’” Borges noted.

In a moment that drew gasps from the audience in a banked lecture room in Spanagel Hall, Borges revealed that he’d discovered the first book purchased by the Naval Academy’s Postgraduate Department, NPS’ predecessor, while cleaning out and organizing the Applied Mathematics Department library – “Differential Equations” by William Johnson, published in 1906.

“This isn’t just the first book bought by the Mathematics and Mechanics Department,” Borges stressed. “It’s the first book purchased by the entire Postgraduate Department at Annapolis. It cost 80 cents.” The book was acquired in 1913, just weeks after the first classes began in February of that year.

“The third member of the Postgraduate Department faculty was Electrical Engineer Leonard Doggett, who joined later in 1914; and the first professor of Marine Engineering, H.A. Everett, in 1916, was hired by Lt. Cmdr. John Halligan, Jr., after whom Halligan Hall is named.”

World War I saw both faculty and officer students returning to sea duty. With the end of the conflict, the Department reopened in June 1919 under the command of Capt. Ernest J. King, later to become Fleet Admiral and after whom King Auditorium is named. Admiral King hired new blood, including Prof. C.C. Bramble who would play a key role in the development of the Harvard Mark II computer and eventually become the first director of research at Dahlgren.

Other early Mathematics faculty include Prof. Charles Rawlins, Jr., the second most senior faculty member after Prof. Paul Kiefer to participate in the ‘Great Move’ to Monterey in 1952, hired in 1922; Prof. Paul Hemke, who taught fluid mechanics and aeronautics, who came on board in 1929; and Prof. Wendell Coates, who was hired in 1931 to replace Hemke. Coates later founded the Postgraduate School’s Department of Aeronautical Engineering, in 1947.

“Warren Randolph “Randy” Church became an assistant professor of Mathematics and Mechanics in 1938 and spent World War II on active duty as a naval officer,” Borges said. “Later, as Chairman of the NPS Department of Mathematics in 1953, Church purchased the first computer at the Naval Postgraduate School – the very first NCR 102A.  The W.R. Church Computer Center was later named in his honor for pioneering contributions to computing at NPS.

“Church was keenly interested in applied mathematics, and especially in the use of mathematics and statistics in anti-submarine warfare,” Borges noted. “He also had a broad range of interests outside of mathematics, including publishing a scholarly Biblical study in 1930 on the confusion surrounding who first questioned Jesus in chapter 18 of the Gospel of John.” 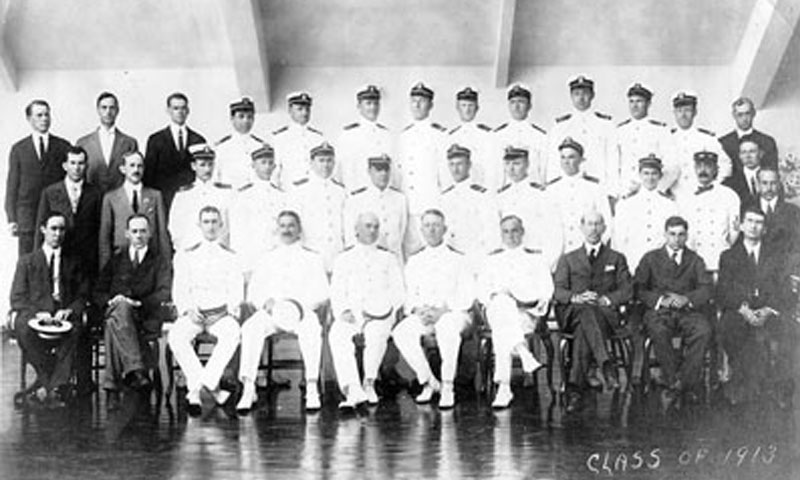 In April 1944, Captain Spanagel, after whom Spanagel Hall was named, was appointed head of the Postgraduate Department, a post he held until 1950. “Spanagel worked with Root to transform the Postgraduate Department from a preparatory school to a university,” Borges noted. Root’s retirement in 1946 marked the end of an era, but he continued to be listed as Senior Professor of Mathematics until 1953, well after the Naval Postgraduate School had moved to Monterey. Rear Adm. E. E. Herrmann, after whom Herrmann Hall is named, succeeded Spanagel and oversaw the cross-country move.

Borges concluded the lecture with a review of the four “children” of NPS’ Department of Mathematics and Mechanics: the Departments of Operations Research, Aeronautical Engineering and Computer Science; and the NPS Computing Center.

A major highlight of the tour of Math Department spin-offs was its acquisition of the first ever Cray supercomputer, a CDC 1604, in January 1960. “It was Model 1, Serial Number 1,” Borges said proudly, “and NPS had the premiere computing faculty in the world.”

One of the biggest highlights of the lecture was Borges himself, who definitely breaks the mold of what a mathematician is ‘supposed to’ look like. Wearing a bright, multi-colored shirt and admitting – when asked – that he has deadlifted 600 pounds, the current Mathematics chair is an internationally ranked Highland Games athlete and looks a lot more like a famous former Navy SEAL and governor than a tweedy numerical analyst.

Showing a similar directness and humility as that former Navy SEAL, Borges concluded the Applied Mathematics timeline with a final historic note, “And then I was hired.”

“And I’ve checked the records,” he said. “The Foucault Pendulum [in the Spanagel Hall lobby] definitely belongs to the Math Department. No question about it.”

“Pulling together all the information for this lecture took more than a year,” Borges said after the lecture. “History is hard work!”