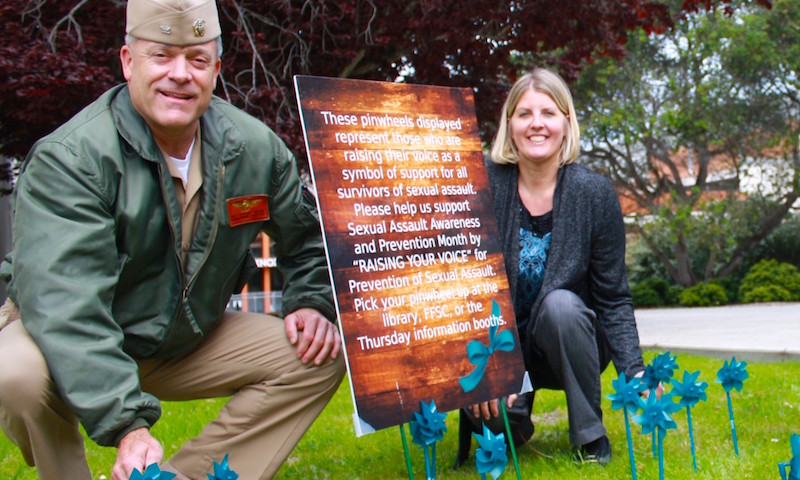 "The Navy is dedicated to establishing a culture and work environment that is safe and sexual assault free," Capt. Rich Wiley, NSA Monterey Commanding Officer.  “Our goal is to fight for zero sexual assaults in the Navy.”

In part, the proclamation urged all members of the Navy community to stand up against sexual assault and make a difference. After Wiley signed the proclamation, it was moved to the passageway alongside the El Prado Dining Room.

Naval Postgraduate School (NPS) victim advocates also participated in the proclamation signing and the placement of a teal pinwheel “garden” on the lawn north of Ingersoll Hall. The installation commanding officer thanked the advocates for continuing the fight against sexual assault within the ranks.

“You are the good guys who are there to pick up the pieces following a sexual assault. Thank you for being part of the solution,” Wiley said.

Jennifer Schoen, whose job is to assist victims, is the command’s Sexual Assault Response Coordinator (SARC). The program she manages is available to help steer victims to prompt medical care, counseling, and whatever assistance a victim may require.  Schoen said anyone could be a victim.

“Sexual assault can happen to anyone at any time,” said Schoen. “It can be overwhelming and devastating for victims and their families.”

The continuation of the 2018 theme “Protecting Our People Protects Our Mission,” established by the DOD Sexual Assault Awareness and Prevention Office, underpins the idea that people are the most important strategic resource and that operational excellence depends on supporting personnel, protecting shipmates and safeguarding team cohesion.

“Make the Commitment” is the call to action for the Navy. The theme encourages all members of the Navy team to commit to promoting a culture that does not tolerate sexual assault.

Every Thursday in April, wear teal and watch for a Sexual Assault Prevention and Response (SAPR) resource table, along with the SARC and uniformed victim advocates, from 11:30 a.m. - 1:00 p.m. The SAPR resource table will be at the following locations:

April 10, a SAPR “Super Hero” run will be conducted in the La Mesa Housing area beginning at 3:00 p.m.

Sexual Assault Awareness and Prevention Month is an opportunity for the entire DOD  – service members, civilians and family members – to underscore their commitment to eliminating the crime of sexual assault, supporting victims, and intervening when appropriate to help stop unsafe behavior. The Department of the Navy is working aggressively to prevent sexual assaults, to support sexual assault victims, and to hold offenders accountable, Schoen concluded.

The Department of Defense Safe Helpline provides worldwide live, confidential support, 24/7 online at https://www.safehelpline.org/, or call (877) 995-5247. As always, if you find yourself in immediate danger, call 911.

If you or someone you know has been the victim of sexual assault, please call one of the numbers below for confidential support: