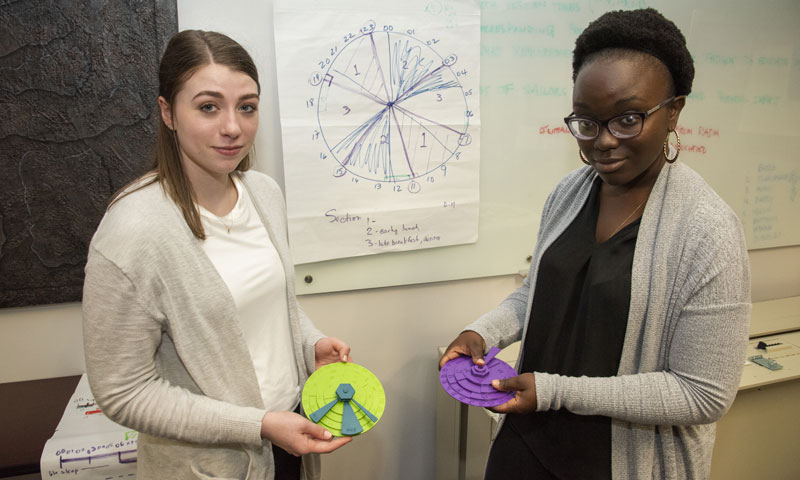 Two Naval Postgraduate School (NPS) interns are about to embark on a research study to find out why pirates wore eyepatches.

Imani Murph, finishing her master’s degree at Embry Riddle Aeronautical University in Florida, and Katie Mortimore, an undergraduate in neuroscience at the University of Washington, set out to answer this question this summer as interns in the NPS’ Human Systems Integration (HSI) lab.

"These interns bring so much to the table, not the least of which is an advanced technological capability,” said HSI director Dr. Nita Shattuck, who’s seminal research on sleep deprivation is dramatically changing the way sailors stand watch throughout the Navy.

“This project I've been working on for so long, they just picked it up and ran with it, despite having no experience with it,” said Shattuck. “They're fearless!”

Under Shattuck’s guidance, Murph and Mortimore will conduct research to determine if different lighting levels can be used to improve alertness. Volunteers for the study will wear an eyepatch for a duration of time and the interns will take saliva samples at different periods of their day to measure melatonin levels.

As seen in the movies, most pirates wear an eyepatch. But what really was the motive behind wearing this iconic accessory?

The true answer lies within a chemical inside the human body – melatonin – the hormone that regulates sleep and causes tiredness, which can either be a vital sign of rejuvenation or a cause of lethality.

“When you go from a bright area to a dark area, it takes about 30 minutes for your eyes to fully adapt to being in the dark,” Murph explained. “It is theorized that back in the day, pirates wore eyepatches so they could go below deck after being out in the sun and still be able to see.”

The eyepatches make it easier to adjust to the darker lighting, a phenomenon that many a U.S. Navy crew member can relate to, especially given their jam-packed schedules.

Many sailors have fallen into the pits of sleep-deprivation, working long shifts with little to no breaks.

“Currently the lighting inside of those areas is really dim and you have crew members staring at a screen and then light 24/7,” said Murph. “So if you think about someone in there at 2 a.m. trying to stay awake… the lighting in there isn't conducive to alertness.”

Sleep deprivation acts as a continuously active stressor on the body which can lead to accidents and mishaps, with potentially deadly results. Just like pirates, crew members may also pass throughout multiple parts of the ship that have different levels of lighting, also leading to decreased melatonin levels.

“You're now having very sleep-deprived people in dim light rooms which is conducive to melatonin,” Mortimore explained. “Their alertness just is way down and they're operating probably the most important part of the shift.”

With melatonin the primary cause of the feeling of “tiredness,” Murph and Mortimore are using the pirate theory to conduct an experiment that tests melatonin levels in eye-patch wearing volunteers.

This experiment will hopefully help determine different lighting levels that can be used to improve alertness, and also determine whether dark adaptation is facilitated by wearing an eyepatch.

The timeline of the research is yet to be determined, but be on the lookout for flyers which will be posted around campus for your chance to wear an eyepatch yourself and help discover what pirates may have known about night vision that we have yet to understand.

Peglegs and parrots will be optional.