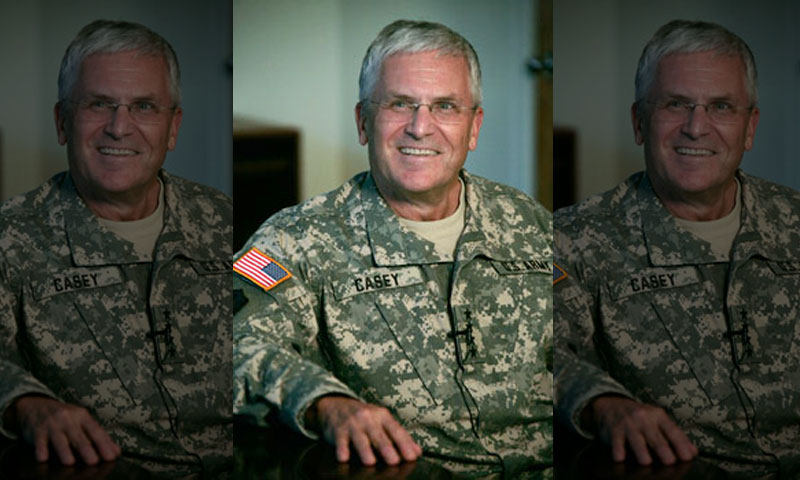 U.S. Army Chief of Staff Gen. George W. Casey offered a detailed preview of the future Army and its role in U.S. national security during his Secretary of the Navy Guest Lecture on May 13 in King Auditorium.

Naval Postgraduate School students, staff and faculty gathered to see Army Chief of Staff General George W. Casey offer a hopeful and focused look at the future of the Army and its role in the big picture of the U.S. military. During his visit on May 13 as a Secretary of the Navy Guest Lecturer, Casey expressed his gratitude for the men and women in uniform, and the challenges they continue to face.

“The quality of the young men and women coming into today’s Army is as good as it’s ever been and I couldn’t be prouder. Because they all come in knowing that they are going to war,“ he said.

Casey addressed the NPS community with the current state of the Army, and the direction of change being taken for the coming years. He touched on the idea that we are in a current state of “persistent conflict” with enemies continually attacking in new ways, requiring the Armed Forces to rise to meet the need.

“A lot of people talk about how slow the army was to change,” said Casey. “We’ve gone from a force that knew relatively little about counter-insurgency as an institution in 2003/2004, to being the best counter-insurgency force in the world, bar none, in a five-year period. And I’ve been very impressed with how the Army has changed and adapted. I think it’s a credit to the young men and women who have been leading this change. “

Coinciding with the 7th Annual Acquisition Symposium, Casey echoed the sentiments of Under Secretary of the Navy Robert O. Work, emphasizing the importance of acquisition systems to the success of the Armed Forces.

“We recognize that we need to get the most value out of our acquisition systems,” said Casey. “And so we’re looking very, very hard at that and I think all of the services are. It’s hugely important as we go ahead. We recognize that we have to be good stewards of the taxpayers’ money.” 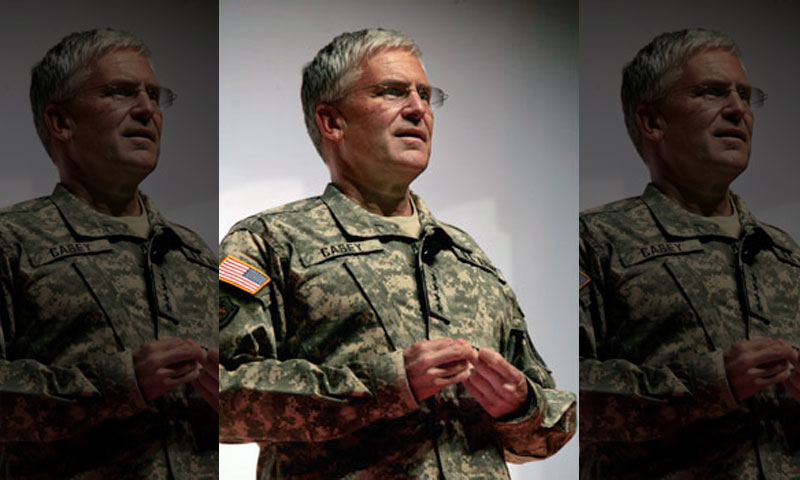 During his Secretary of the Navy Guest Lecture on May 13 at NPS, U.S. Army Chief of Staff Gen. George W. Casey stressed the Army’s ability to rapidly adjust to counter the enemies ever-changing tactics. “Today’s army is a values-based, combat-seasoned, professional force,” he said. “And it’s the best in the world at what it does.

Adding to the demand, the services are stepping up to help others, creating a global need for competent leaders. As a former Foreign Area Officer (FAO), Casey understands the need for officers to not only be experienced as soldiers, but also as culturally-astute leaders creating better understanding across boundaries. After eight and a half years of war, our nation and our military continue to feel the effects, Casey noted, and in these times of need, institutions like NPS and the Defense Language Institute become key to creating military leaders that will carry the services into the future.

“Because of the complexities that we see in the environment we’re facing – and it’s only going to get more complex as we go to the future – we need leaders of character and competence who are supremely competent in their core proficiencies and broad enough to do a range of things. Because when you have a complex task, people get befuddled by it,” explained Casey. “When they are befuddled, they don’t act. And it’s the leader that needs to grasp the situation and chart a course through the complexity. And if he’s not competent and confident, and broad enough to think his way through tough problems, then we won’t get what we need to get. So we feel very strongly that leadership is going to be key to our continued success in the 21st century security environment.”

Casey has served in the Armed Forces for 40 years, and has seen a number of changes during that time. He has served around the world and commanded at every level from platoon to division. His experience allows him to not only connect with soldiers, but to understand the risks they take and the sacrifices they make to ensure our national security.

Casey acknowledged the struggle that will continue on as we face enemies with ever-changing tactics. He expressed full confidence in the quality of those serving in the Army, and of the ability to meet the needs of the future.

“Today’s army is a values-based, combat-seasoned, professional force,” added Casey. “And it’s the best in the world at what it does. And I couldn’t be prouder of the men and women that make it up.”