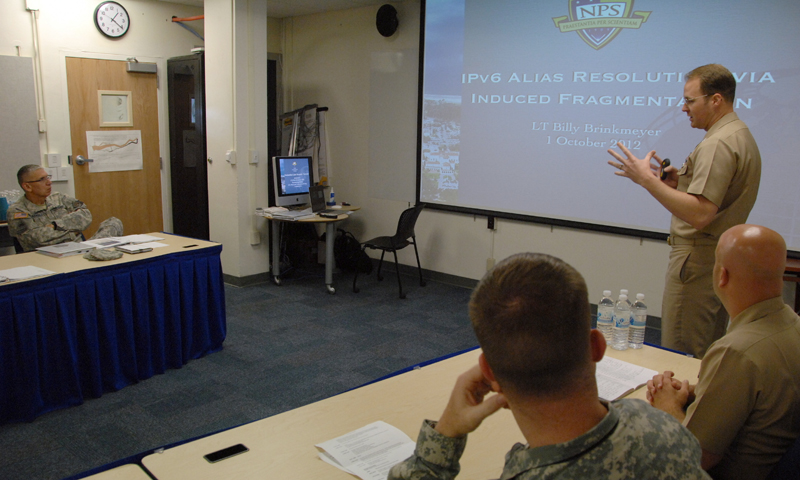 Lt. Gen. Rhett A. Hernandez, Commanding General of U.S. Army Cyber Command/U.S. 2nd Army, spent two days at the Naval Postgraduate School for an exploratory visit to the university, Oct. 1-2. While on campus, Hernandez and members of his official party toured NPS facilities, met with key faculty members and listened to student thesis presentations. The visit provided Hernandez and his staff an opportunity to build partnerships between his command and NPS.

“This visit provided an opportunity for our command to look hard at the educational capability of NPS, and how we can leverage the power of what the university is already doing from a cyber perspective,” noted Hernandez. “I was very impressed with the passion and energy from the faculty and students here.”

According Army Maj. Joshua Bundt, an NPS student who was handpicked to deliver a brief to Hernandez and his staff, the opportunity to provide an overview of his research to a senior military commander was an honor.

“I was selected by members of the Cyber Academic Group to deliver my thesis topic, and it was an absolute honor to present my research idea to the commander of Army Cyber Command,” noted Bundt. “All the student presentations were well received by the general, who showed knowledgeable interest in each student’s research question and emphasized the importance of the ongoing cyber related research at NPS.”

Noting the operational relevance of the research conducted at NPS, Hernandez complimented students and faculty alike on their efforts in the cyber domain.

“The research I’ve seen presented here at NPS has been first class,” noted Hernandez. “Most important is the operational relevance of all the subjects I’ve seen. It’s things that military officers have learned over the last 11 years of war that they have been able to bring back to the educational system and examine.”

While Hernandez’ visit to NPS was exploratory, his outlook on the developing partnership between the soldiers and civilians he leads was positive.

“I look forward to the continued partnership with Army Cyber Command and NPS,” noted Hernandez. “I recognize the work we have done together in the past is as significant as the work we are doing together in this new domain of cyber.”

Hernandez assumed command of Army Cyber Command/2nd Army in October of 2010. Army Cyber Command/2nd Army plans, coordinates, integrates, synchronizes, directs, and conducts network operations and defense of all Army networks; when directed, conducts cyberspace operations in support of full spectrum operations to ensure U.S./Allied freedom of action in cyberspace, and to deny the same to our adversaries. The total command strength will exceed 21,000 Soldiers and civilians and will be funded from within existing fiscal resources.