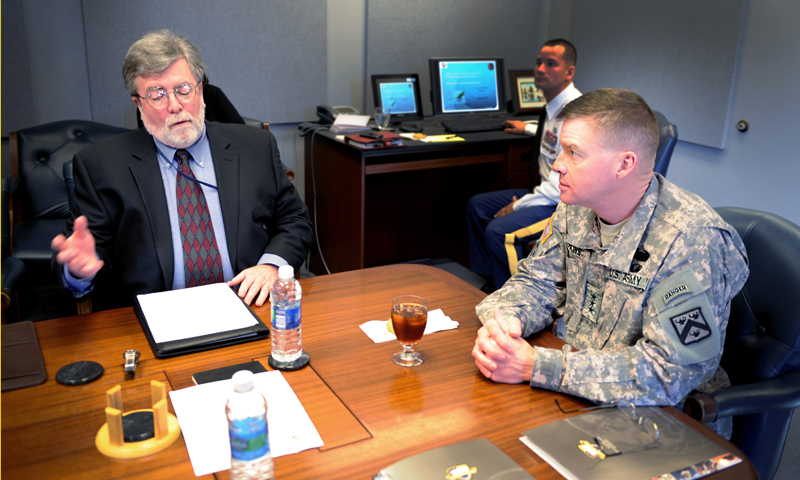 The Commanding General of the esteemed ‘intellectual center’ of the Army, the Combined Arms Center (CAC), Lt. Gen. David Perkins visited the Naval Postgraduate School (NPS) for a series of briefings and meetings with faculty, staff and students, Jan 10.

The briefs represent the continuation of an exploratory visit by the Chief of Staff of the Army, Gen. Raymond Odierno, this past September, as the Army continues to support and potentially expands interest in different programs offered at the university. Perkins expressed interest in the abilities education provides his soldiers, and discussed his educational goals with leaders at NPS emphasizing the need for training programs to adapt to a changing world.

“Advanced schooling is a critical element of the professional development of our soldiers,” said Perkins, “because it gives them technical skills and problem solving skills that I think are critical to operate in this increasingly ambiguous environment.”

The department of Defense Analysis currently houses about half of the total number of Army officers studying at NPS. Perkins was briefed in full on the program, but also explored other curricula and research currently underway within the Graduate School for Operational and Information Sciences, and the School of International Graduate Studies (SIGS).

SIGS’ Department of National Security Affairs (NSA), which specializes in the study of international relations, security policy and regional security studies, presented Perkins with a comprehensive overview of the department’s programs. NSA curricula represent an intricate part of the educational requirements of Foreign Area Officers (FAOs), a discipline the Army holds in high regard.

For department leadership having a face to face with such an important leader presented a unique opportunity. NSA Professor and Chair, Dr. Dan Moran, noted the meeting provides the chance to express, in person, the kind of university NPS is.

“It’s always a pleasure, frankly, to meet senior flag representatives,” said Moran. “Their time is precious and it’s great that they can find the time to come and talk to us, and we want to be sure that they come away with the accurate impression that NPS is a heck of a place.” 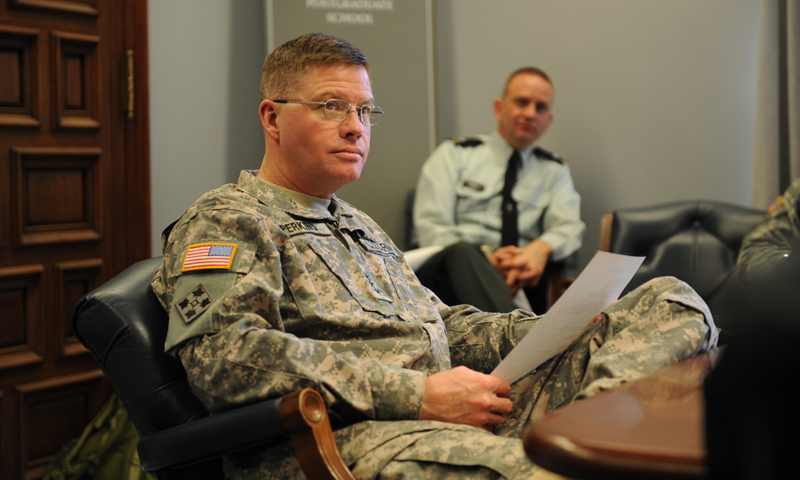 Although NPS is a Naval institution, its joint, multilateral research and educational programs have been held in high respect by Army leadership for many years. And in the same way, NPS has enjoyed a significant presence of Army personnel in its student body. Odierno, and Perkins, noted they both saw the value of this partnership, especially in the school’s flexibility and adaptability to develop programs that meet the specific needs of the Army.

As Perkins wrapped up his visit, he praised the school’s international and joint environment that exposes soldiers and other service members to a similar environment they would see in the real world, an experience that would prove crucial to the formation of any leader.

“NPS has a great academic reputation,” said Perkins. “It has a unique capability to focus on problems that the military is particularly concerned about. It’s very difficult to see everything in one day but I think I was most impressed by the enthusiasm and dedication of the faculty, staff and students. Obviously they are very renowned for their academics but their commitment, and in many cases sense of service, were outstanding.”