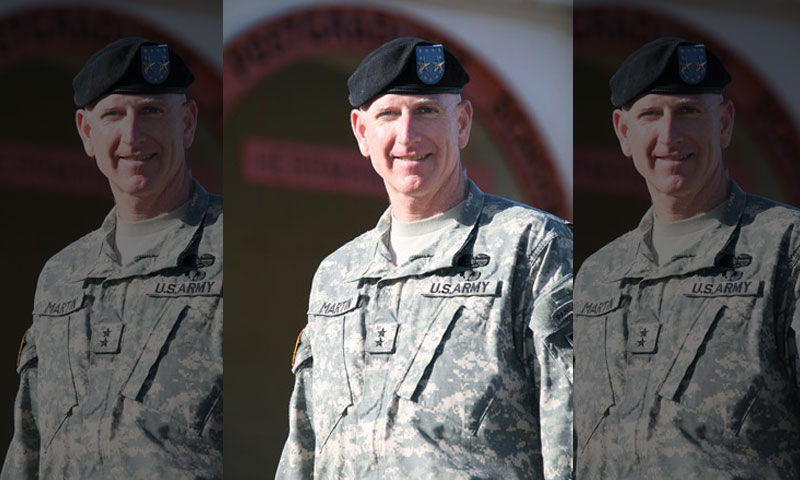 “Congratulations for being where you are at the Naval Postgraduate School,” Martin told the sea of uniformed officer students. “NPS is an awesome place – a great educational institution and a national treasure – and you’re in the right place at the right time to get educated ‘smart’ for the current world. I’m thrilled that Professor Miller invited me to come here to NPS and that I see so many of you from our international allies and friends. The education you get here is critical to being excellent officers, not just for the U.S. but for all of our countries.”

Martin championed and is facilitating Miller’s groundbreaking study of the effects of sleep deprivation on over 400 Army recruits and drill instructors at the Missouri command.

“The Army sent me to graduate school and that education has helped me enormously to do the job as a general officer because the coin of the realm is being able to find and build smart people who can think through complexity on the fly,” he said. Martin holds master's degrees in civil engineering and technology policy as well as a Ph.D. in engineering management and public policy from the Massachusetts Institute of Technology, and master’s degrees from the Naval War College and Army War College.

“In my job training new Army recruits into values based leaders, I put a huge premium on smart thinking, which is especially important at this time when we’re training the highest number for full spectrum operations since Vietnam.”

Martin stressed the importance of the military teaming with industry and academia to harness the nation’s brainpower, and offered the NPS sleep study as an example of just that.

“Professor Miller is doing a great study for us on the effects of sleep,’ he said. “We’ll soon know the best schedules to ensure the greatest strength and resiliency of our force – not just the physical aspect, but the spiritual and mental as well.”

Miller, associate professor of Operations Research and former co-director of the NPS Center for Human Systems Integration, was quick to return the compliment.

“Major General Martin is creative and passionate about his commitment to values based training for Soldiers,” Miller said in an interview following the lecture. “He’s really serious about getting them ready and resilient for combat duties.”

So serious, in fact, that, according to Martin, “I’ve had parents crying to drill sergeants at graduation ceremonies [from basic training] that we’d done in ten weeks what they couldn’t do in 20 years.”

“Though he served at the end of the 1800s, he was way ahead of his time – truly a great Army leader for the 21st Century. He was a licensed doctor and surgeon from Harvard, yet volunteered for the ‘Rough Riders’ with Teddy Roosevelt and applied his higher education to great effect by unifying the Army’s scattered forts into the modern institution it is today. If you were going to design a place for 21st Century training from the ground up, it would be Fort Leonard Wood.”

Martin extended an open invitation to NPS faculty and students to conduct other studies with recruits at Fort Leonard Wood.

“Come and partner with us,” he said. “I’d love to work with you on your master’s or Ph.D. We not only train the second largest cadre of new Army recruits – 93,000 will come through this year – but all branches of the military, military police, non lethal weapons, counter-terrorism consequence management teams, and chemical-biological school. We train NORTHCOM, all the National Guard units’ civil affairs teams, K-9 teams, and are the most advanced center for IED training in the Army. And we have a technology and science park, the Leonard Wood Institute, run by the University of Missouri right on base with which you can collaborate.

Prior to commanding the Maneuver Support Center, Martin served as Commandant of the U.S. Army Engineer School and Regiment; Deputy Commanding General of MANSCEN for Concepts, Doctrine and Organization; and Commander and Division Engineer of the U.S. Army Corps of Engineers, Northwestern Division, in Portland, Ore.

Martin’s troop leadership positions include commanding the 130th Engineer Brigade and serving as V Corps Engineer in Europe and the Middle East from June 2002 to July 2004. During the first year of Operation Iraqi Freedom, he commanded an expanded brigade of 13,000 Soldiers that conducted full spectrum operations across Iraq. Other commands include the 5th Engineer Battalion at Fort Leonard Wood, which provided direct support to the 3rd Armored Cavalry Regiment; and B Company, 79th Engineer Battalion in Karlsruhe, Germany. As a lieutenant, Martin was a platoon leader and company executive officer with the 94th Engineer Battalion in Darmstadt, Germany.

Martin’s staff assignments include Assistant Deputy Chief of Staff (Operations and Plans) for U.S. Army Europe and 7th Army in Heidelberg, Germany; Task Force Engineer with Joint Task Force Bravo in Honduras; Engineer Operations Officer at I Corps, as well as Operations Officer and Executive Officer of the 864th Engineer Battalion at Fort Lewis, Wash.; and Project Engineer in the Corps of Engineers' Europe Division in Karlsruhe, Germany.

Martin’s leader development and education assignments include Director of Senior Command and Leadership at the Army War College at Carlisle Barracks, Pa.; and Instructor and then Assistant Professor of National Security Studies, International Relations and American Politics in the Department of Social Sciences at West Point. He also served as Recruiting/Admissions Officer for the U.S. Military Academy.