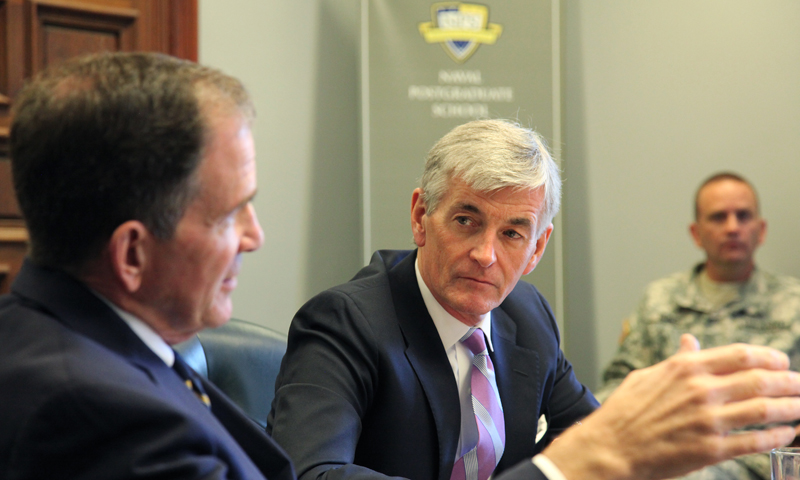 Secretary of the Army John McHugh meets with NPS President Dan Oliver during a campus visit May 21.

Secretary of the Army John McHugh visited the Naval Postgraduate School (NPS), May 21, to learn more about research conducted by the university and to see the academic programs military officers take part in.

McHugh and his staff began the afternoon by receiving a command brief from NPS President Dan Oliver and key faculty members. The group was briefed on the development of the university's new cyber security degree program.

"The Naval Postgraduate School is an important place to the Army, and we need to make sure we are taking full advantage of it," said McHugh during the command briefing. "The joint approach to training at the graduate and postgraduate level is impressive and I have an enormous respect for the work that is being done here. I want to know how the Army can help your efforts."

"We're here to focus on maximizing cyberspace operational effectiveness, and we're very excited about the programs in this field of study that we are offering our students," said Irvine during her presentation.

Noting the gap of cyber proficiencies between senior and junior service members, McHugh applauded university efforts in the area of cyber security and specifically the efforts targeting senior enlisted sailors and soldiers, who will be allowed to enter the newly formed program in upcoming academic quarters.

Upon conclusion of the command and cyber operations brief, McHugh and his staff were joined by local Congressman Rep. Sam Farr for a tour of the university's Common Operational Research Environment (CORE) lab. The CORE lab, an ongoing center of study under the university's Defense Analysis department, is predominantly attended by Army officers focusing on data, information technologies and theories applicable to irregular warfare.

"I briefed the Secretary on the CORE lab, which is embedded in the Defense Analysis department," said Dr. Sean Everton, co-director of the CORE lab. "We train students, most of whom are Army, how to fuse cutting edge methodologies, such as social network analysis and geospatial analysis, to real world situations, so that they can gain a better understanding of the operating environment."

McHugh ended the visit with a briefing on a current research project that uses smartphone technology to collect and analyze information on improvised explosive device networks.

"I appreciate all that you're doing in this important field of study," McHugh told the students. "This is really fascinating stuff, and it demonstrates the inescapable reality of what the future holds."