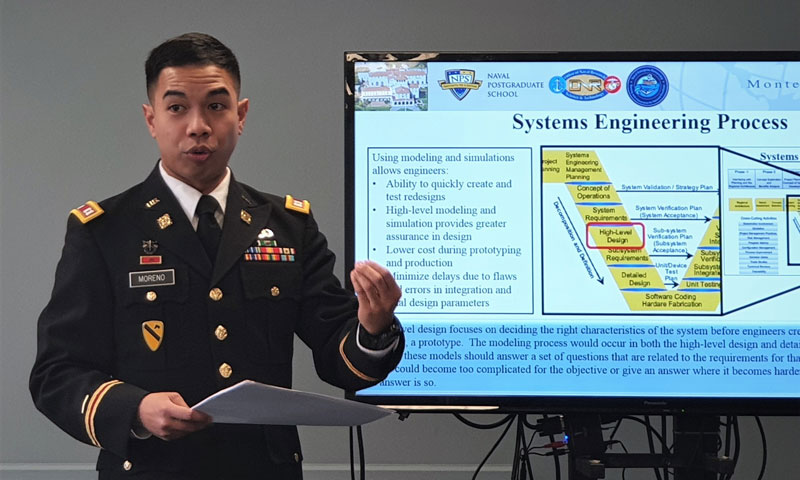 Moreno, an accomplished scholar and officer assigned to the 19th Expeditionary Sustainment Command at Camp Henry, Daegu, Republic of Korea, wrote two manuscripts to complete the requirements for earning his Master’s Degree in Systems Engineering.

Moreno’s manuscripts have been well-received by higher engineering institutions, so much so, that he was invited to present his material at two engineering conferences. His first submission to the American Society of Mechanical Engineers allowed him to speak in Orlando, Florida in June 2018 at the Power & Energy Conference & Exhibition. There, his research was vetted by scholars and professionals of the greater engineering community.

From there, Moreno’s second manuscript was accepted by an International Conference sponsored by Innovations of Applied Energy that was held in Oxford, England on March 14-15, 2019. The two-day conference in Oxford featured international students and researchers presenting their work to scholars and professionals in the engineering community.

Moreno’s research into models and simulation designs in the array of thermoelectric generation seeks to harvest waste heat energy from military equipment to be recycled into energy to power other systems.

Moreno said higher education allows you to explore new concepts, and be able to think outside the box in order to come up with solutions for modern-day problems and issues.

“With today’s culture, we are looking towards more sustainable energy sources,” Moreno said. “Like how the automobile industry is designing and manufacturing electric vehicles because they’re better for the environment than combustion engines.”

Moreno said an added benefit for recycling waste heat is in reducing an Army’s heat signature, which can be detected by an adversary. “On the battlefield, you put off heat,” said Moreno. “So, by converting the heat into electricity, you are essentially reducing the heat signature without having to insulate it.”

Moreno looks forward to future innovation in waste heat recycling because he said existing systems are not efficient because the conversion rate is small. He said more innovation, planning and research is required to expand efficiency. For now, he is focused on the process.

“Ultimately, it is my desire to ensure our Army has a combat edge on the battlefield,” Moreno said. “If convoys can go for 20 miles, 40 miles, or even 50 miles more as a result of recycling heat energy, then that is more efficient, and it requires less resources and logistical support.”

Moreno, who is originally from Northridge, California, has always had a passion for engineering. He earned his undergraduate degree in mechanical engineering and commissioned into the Army from Hofstra University’s Reserve Officers’ Training Corps program. He is now approaching his 10th anniversary of Army service.

The Army’s Career Satisfaction Program, Graduate School Option, provided Moreno with an opportunity to continue his studies, integrating his education with his career.

“I’m very interested in technology and innovation, and my desire in life is to develop and engineer new technology for the greater good, and at this time in my life, being able to provide ideas and technologies for our defense,” said Moreno. “I’m very grateful to the Army for providing me this opportunity in education, and allowing young officers the opportunity to pursue graduate school.”