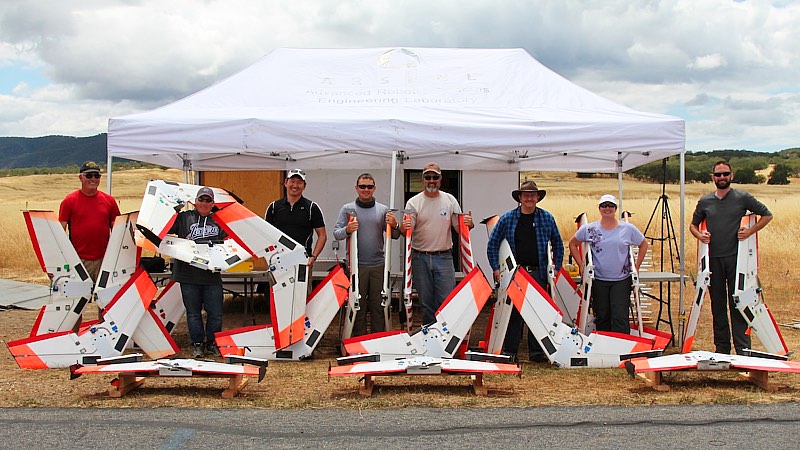 A team of faculty and researchers at the Naval Postgraduate School (NPS) is setting what are believed to be world records in the realm of unmanned aerial vehicles (UAVs).

During the latest Joint Interagency Field Experimentation (JIFX) event at Camp Roberts, Calif., this past May, NPS Department of Systems Engineering Assistant Professor Timothy Chung and members of NPS’ Advanced Robotic Systems Engineering Laboratory (ARSENL) successfully launched and set into flight a “swarm” of 20 autonomous UAVs, breaking a previous record they set in April. And they’re poised to break that record again in July, when they return to the scene of their successes at Camp Roberts.

“I’m incredibly pleased to share ARSENL's accomplishment of successfully flying 20 UAVs simultaneously,” said Chung. “This number beats our previous ARSENL record of 12 UAVs, set in April, and we believe it to be a first-of-its-kind demonstration of this magnitude for large-scale, autonomous fixed-wing UAV teams.”

Chung and his team will not only look to break their record of 20 autonomous UAVs, they have their sights set even higher, with hopes to launch and fly a further record-breaking 50 autonomous UAVs in the near future.

“We are increasing the number of aircraft deployed every time we go out,” said Chung, who first flew six aircraft in December, nine in February, 12 in April, and finally ARSENL’s record-breaking 20 aircraft.

“We have been working on this for two years, so it was very gratifying to successfully fly 20 aircraft,” said Marianna Jones. “Flying 20 aircraft was a mile-marker on the road to our eventual goal of flying 50 aircraft simultaneously.”

Jones is part of Chung’s ground crew. She is responsible for preparing the aircraft for flight, conducting preflight software checks, and launching aircraft into the air before their autonomous systems engage.

“We place each aircraft on a set of rails and it is launched with a bungee cord. After the aircraft is deployed, its motor kicks in and the aircraft flies to a determined waypoint,” she continued. “The aircraft are launched one after another in quick succession. You have to be very quick, and you still have to contend with landing the aircraft, within the limited battery life that each aircraft holds.”

Once in the air, NPS Research Associate Mike Clement’s work takes over. He has been working on network technologies at NPS for the last 10 years. Clement joined Chung’s team after working to provide networking solutions to NPS’ active field experimentation programs. He describes the network challenges posed by autonomous UAV swarms in a manner reminiscent of an aerial game of Marco Polo.

“Think of a room full of blindfolded people who have to move around together without bumping into each other, by periodically shouting out, ‘Here I am!’ Everyone in the room has to be able to hear them,” said Clement. “Just as in a crowded room, not everyone can hear each other and the conversations can become garbled.

“When speaking in a crowded room, someone at the far end might need someone in the middle of the room to pass a message to someone else on the other side. That’s where the notion of ‘mesh’ networks come in,” Clement continued.

But as autonomous systems, ARSENL’s UAVs are not just listening to and passing information on. They are listening and making autonomous decisions based on the information that they receive, and the rules they have been given by mission programmers. During ARSENL’s latest 20 aircraft experiment, each sub-swarm selected a lead aircraft and all remaining aircraft followed their respective leaders in autonomous flight.

Building sophisticated autonomy on the lightweight, off-the-shelf airframes utilized by ARSENL may appear daunting, but Chung insists that he is restrained more by regulations than by technology. What he and his team are attempting is so novel that obtaining the flight approvals necessary to fly large numbers of autonomous aircraft presents some of his team’s most significant challenges.

“We want to demonstrate to the Navy that we have the technology to do this today,” said Chung. “We want to discover both offensive and defensive applications for this technology.”

Chung hopes to do just that by laying the groundwork for a future 50-on-50 swarm competition that will pit NPS and universities from across the country against each other in a friendly aerial battle reminiscent of capture-the-flag where participants will have the opportunity to learn from each other’s strategies, and code on the fly.

“A requirement of the competition will be that everything we do will be in an open environment and that we will exchange information,” explained Chung. “We have the academic connections and the military credentials to make this happen. NPS is the best place to do this kind of work.”