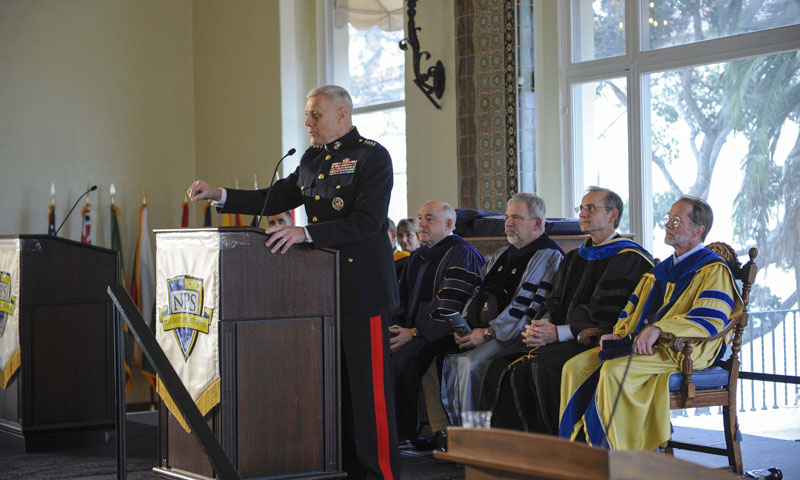 The Naval Postgraduate School (NPS) conferred advanced degrees upon hundreds of honored graduates during its quarterly Graduation Ceremony, Dec. 19. Uniquely, though, this Fall Quarter’s 352 graduates were recognized in split ceremonies in the Barbara McNitt Ballroom in the university’s Herrmann Hall, due to renovations in King Auditorium.

It would prove to be the only change in an honored tradition at the institution, where active duty service members, Department of Defense Civilians (DOD) civilians, homeland security professionals from across the country, and international officers from allied and partnered nations around the world, celebrated the culmination of their graduate studies.

NPS President retired Vice Adm. Ronald A. Route welcomed the graduates, their families as well as attending faculty and staff to the ceremony. And given the unique, classic venue for this quarter’s commencement, Route also took the opportunity to point out the university’s rich history.

“You all know that King Hall, our regular auditorium, is being renovated, so this give us the opportunity to celebrate Naval Postgraduate School history, right here, in this building,” Route said.

He shared with the audience that the ballroom they sat in housed NPS’ first graduation ceremony in 1949, and was also the location of the institution’s official dedication in 1952 by Fleet Adm. Chester Nimitz and Secretary of the Navy, the Honorable Dan A. Kimball.

Route went on to offer his recognition of the university’s “citizen students” for their accomplishments both academically on campus, and in the community off campus. He then turned the podium over to commencement speaker Assistant Commandant of the Marine Corps Gen. John M. Paxton Jr. Paxton is the second highest-ranking officer in the Marine Corps, but began his remarks wanting to speak briefly on behalf of the Commandant, the Chief of Naval Operations, and the Secretary of the Navy.

“I am indeed here to represent the Commandant, and I think with a little liberal license, I could represent the CNO and the Secretary in saying thanks and Bravo Zulu,” Paxton said.

A longtime advocate of NPS, Paxton paid special tribute to the university’s faculty and staff, critical players in the students’ successes.

“I think we all need to express some gratitude to the folks who make this institution special, and why you have been afforded the unique education opportunity, and future growth opportunity that you have,” he noted. “You have potential Nobel Laureates and nominees here, you have world class authors who have led in the national studies, and performed work of tremendous import to the United States of America. And they take all that experience and expertise, and then focus it back on students.”

“And they do it directly, they don’t do it with teaching assistants,” he stressed. “They lean in and take your operational experience, your combat experience, and your potential, and they turn you into more critical thinkers; more intricate problem solvers; and team ball players.” 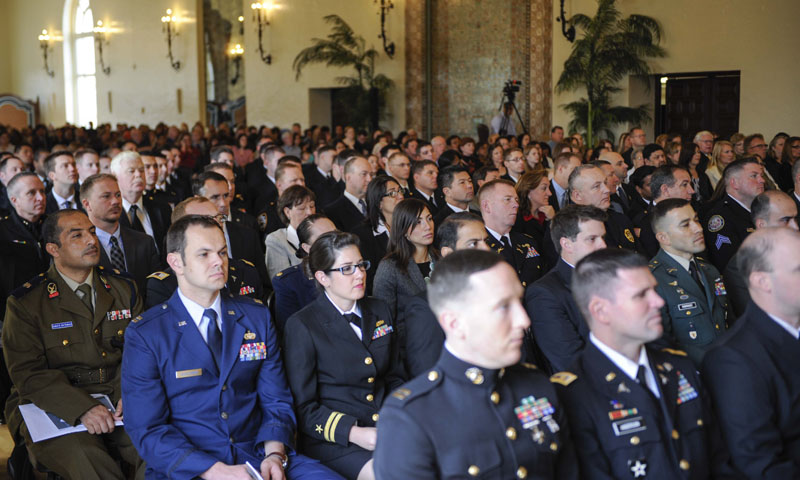 Paxton referenced iconic moments in history, where critical decisions made by leaders in challenging situations made the difference between success and failure. The world may have changed, he said, but nations will still need leaders who can make difficult choices.

“You are going to step out into a world that is full of complexity, full of uncertainty, and you are going to want to harness the skills of the core curricula here at the Naval Postgraduate School,” Paxton said. “In a world of dynamic change, in a world where the tyranny of time and the tyranny of distance are working against us, what we really need is thinkers and problem solvers who are leaders themselves, or whose idea can capture the attention of a leader … that’s why you are here.”

Paxton closed his remarks by referencing words of wisdom from ancient Greek author Thucydides, who once noted, “The nation that will insist on drawing a broad line of demarcation between the fighting man and the thinking man is liable to find its fighting done by fools and its thinking done by cowards.”

“The Naval Postgraduate School is rich and unique because it is operationally relevant,” Paxton said emphatically. “You are here because you are thinkers and fighters, and I ask you to keep the two of them close.”

A total of 356 advanced degrees were conferred upon 352 graduates during the ceremony, including 44 international officers and 71 distance-learning students.