Aviator Dick Rutan Tells of Record-Breaking Flight Aboard the Voyager

Aviator Dick Rutan Tells of Record-Breaking Flight Aboard the Voyager 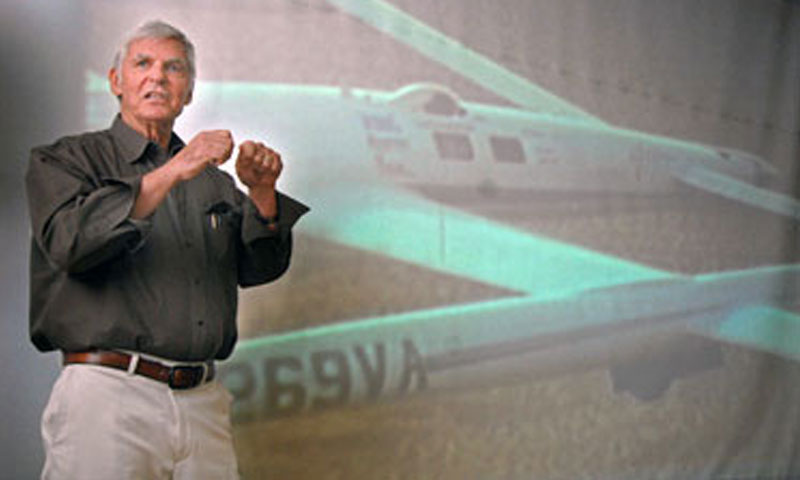 Renowned aviator and retired Air Force pilot Dick Rutan shares with NPS students, faculty and guests the story of his nearly 25,000-mile record-breaking, non-stop trip around the world aboard the Voyager, an aircraft designed for the feat by Rutan, his brother Burt and Jeana Yeager.

In early April, renowned aviator and retired Air Force Lt. Col. Richard Glenn “Dick” Rutan spoke to a packed audience in the MAE Auditorium at NPS about his time in the Armed Forces and his record-breaking flight around the world. Rutan made aviation history in 1986 when he flew the first non-stop flight around the world alongside Jeana Yeager aboard the Voyager, an airplane designed by his brother Burt Rutan, and built by Burt, Dick and Jeana.

On December 14, 1986, the Voyager took off from Edwards Air Force Base and returned to the same airport nine days, three minutes and 44 seconds later, without stopping to refuel. The team traveled 24,986 miles, breaking the distance record of 12,532 miles previously held by a B-52 Stratofortress bomber. The flight secured their place in aviation history, and earned the Voyager a spot in the Smithsonian National Air and Space Museum, where the record-setting aircraft is on permanent display.

With a passion for flying that was ignited as a child, Rutan spoke about his time in the Air Force during the Vietnam War, and the code of conduct that has stuck with him since his retirement from the service. “I still remember what it said: ‘I’m an American fighting man. And I serve in the force, which guards my country and my way of life. And I am willing to give my life in their defense.’” He added, “What a profound statement. What a huge meaning that is. That you are willing to give your life for the flag, for your liberty, and for what it means.” Rutan took his oath to heart and flew over 100 high-risk classified missions, and was even shot down over North Vietnam in 1968.

After 20 years of service, 325 missions, and being awarded the Silver Star, five Distinguished Flying Crosses, 16 Air Medals and a Purple Heart, Rutan retired from the Air Force in 1978 and joined his younger brother’s aircraft company, Rutan Aircraft Factory, in Mojave, Calif. With few safety regulations and restrictions for aviation in the early 80s, the barren high desert proved to be a great place to try new things and push the boundaries of design and performance.

It was there that Dick’s brother Burt had established himself as an innovative aircraft designer, and thrived on doing the seemingly impossible. “My brother, he is a visionary. He is a consummate designer, thinking, trying to do something different,” said Rutan. “One of his faults is that he won’t do anything that anyone else has done. Whether it’s better than what [someone else] did or not, it’s gotta be different.” 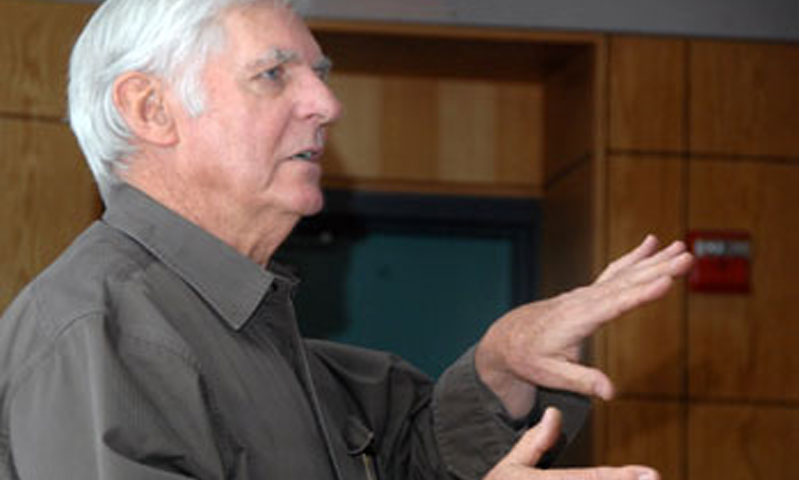 Aviator Dick Rutan shares the details of his non-stop un-refueled flight around the world. On April 2nd, Rutan spoke with NPS students, faculty and guests about the monumental task of designing and building a plane that could handle the trip.

It was no surprise then when Yeager and the Rutan brothers were out to lunch together one day in 1980 and Burt brought up the idea of building a plane that could fly non-stop around the world. A quick sketch on a napkin was the start of a six-year project that took over 50 volunteers and dozens of private donations to see to fruition.

Burt designed the plane, with a 110-ft. wingspan and 17 fuel tanks. “I laid up every single strand of carbon fiber on that airplane personally. I thought if this thing breaks or if there’s a mistake made in the structure, when the airplane is spinning in, there will be only one person to blame, and that will be myself,” said Rutan. “Besides that, we didn’t have any money to hire anybody.”  Designed for maximum fuel efficiency, there were doubts about the structural integrity of an aircraft weighing only 939lbs (unloaded) and carrying 7,011lbs of fuel. After two years of construction, the Voyager began extensive test flights.

With every ounce of weight being accounted for, the team was forced to cut out any excess fuel or material that might weigh the plane down. “There was a big argument between my brother and I about the amount of fuel. I thought he was too conservative and I ordered 300 more pounds of fuel be put aboard the plane. It increased the risk in getting airborne, but I thought it was a greater risk to run out of fuel in Mexico and have to do the whole darn thing over again. I wanted the darn thing over with.”

After a mishap on a test run left the cabin filled with fuel fumes, Rutan landed safely and wondered if he would ever see the Voyager complete the trip around the world. “I landed, I got out of the airplane, and I thought: It’s gonna take us a year to fix this. I’ve got another year to live.” He said, “I really, honestly thought that I would die in this airplane. I didn’t think that there was any way it could fly ten days without a major malfunction of the airplane itself. We had no backups for anything. Everything had to be absolutely ultralight.”

The weight factor also forced the team to equip the plane with minimal safety gear, should they need to jump to safety. The plane held two small pouches with an inflatable navy life raft and parachutes that were barely adequate for a safe water landing. Flexible wings and rough handling also added to the stress of flying the Voyager. “The airplane was really a handful to fly,” said Rutan, “I hated flying it. In fact, I loathed flying it.”

After 68 test flights and 360 hours in the air, the weather team gave the go-ahead and the crew scrambled to get everything ready for takeoff. On December 14, 1986, the Voyager took off to circumnavigate the globe. With limited resources and a heightened sense of anxiety, Rutan and Yeager got little sleep in the cramped cabin space and the controls needed constant attention to correct it if the plane started to gallop. Set on a route largely determined by the weather, they maintained an average altitude of 11,000 ft, and kept a sharp eye for cumulus clouds that threatened to tear the wings off of their fragile plane.

“Every time the sun would come up, I was totally amazed that we were still flying. We’re little homebuilders. We’re not a government, space program, or some multi-billion dollar contract going on out there. We’re just a couple of homebuilders with this hokey little airplane,” said Rutan. “We had done it, and I absolutely could not believe it. It was actually successful.”

After nearly nine days in the air, Rutan prepared to touch down at Edwards Air Force Base for the successful end to what he long expected to be the final flight of his life. With only 18 gallons of fuel remaining, a few wing tips missing, a broken fuel pump and a dehydrated and exhausted crew, the Voyager had covered 24, 986 miles in 9 days. Upon completing the monumental flight, Rutan and Yeager were flooded with offers for interviews, endorsements and opportunities. Not expecting any attention, let alone attention of this magnitude, they were ill prepared for big corporations looking to take advantage of them and to monopolize on the Voyager story. Court battles ensued, but for Rutan, knowing that they had succeeded was enough of a reward.