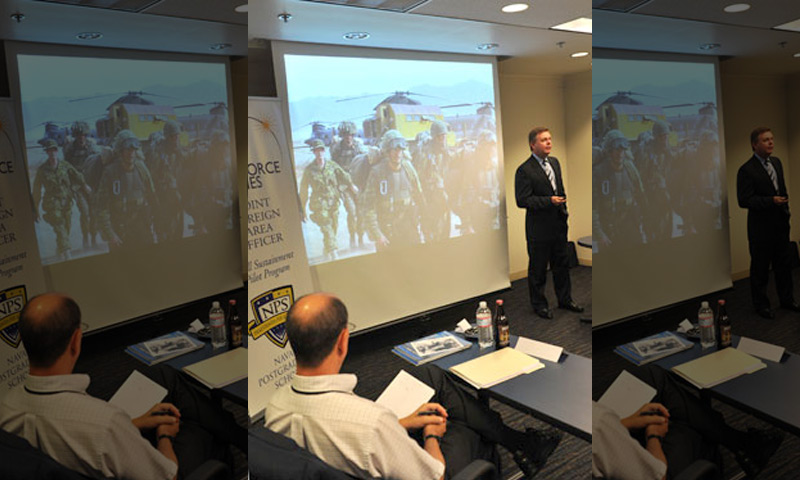 Often operating in foreign countries, FAOs provide Combatant Commanders with political-military analysis and are required to interact with members of the media to effectively communicate military messages across a broad spectrum of expansive audiences.

“(The media and military) have had an extremely close relationship over many hundreds of years,” said Savidge. “Military members must always consider being engaged with the media.”

Savidge has a long history of working closely with armed forces in the heat of battle, and shared his unique perspective of being an embedded journalist with diverse militaries throughout the globe.

“In my years of being a journalist, I’ve had the very good fortune to spend a great deal of time with a lot of different militaries,” said Savidge, who was the first reporter embedded with American military units operating in Afghanistan. “I’ve been around the world in a lot of different circumstances and conflicts. I’ve thought it to be a fascinating experience, that always at some point scares the living daylights out of me.”

He continued by examining the similarities and differences of military and media cultures, one significant difference noted was the views on handling information.

This is the whole gap that we must, in our relationship, try to bridge and work around, Savidge continued. It is your job and mine to reconcile those sometime diverse considerations.

Savidge offered a brief overview of the mass communications evolution, starting with the telegraph and its role in binding the military and media communities, and continuing to present day communications such as blogs, the Internet and live broadcasts from embedded correspondents.

“Telegraphs allowed you to send short, concise, descriptive paragraphs over extremely long distances from very remote locations in almost real time,” said Savidge. “It transformed communication, and it did so almost overnight.”

Students were encouraged to develop their story-telling techniques and to bring a fresh approach to media engagements. Savidge also emphasized techniques on getting the right message to the right audience.

“Interviews should not be looked at as an intellectual engagement with a reporter. They should be viewed as an opportunity to deliver specific messages to specific audiences through the filter of a reporter,” said Savidge.

The class discussed cultural differences in local, national and international media, and how to embrace and overcome them. Students were also challenged to search for a deeper understanding of the media throughout the course.

“Truly understanding the media is a work in progress,” said Savidge. “It’s a very eclectic, very diverse industry which is based upon individual personalities, as well as a professional trade, as well as multi-national corporations that own networks and of course different customs, different languages, and different presentations all around the world.”

The exposure to a professional media perspective was welcomed by many students of the class who could be looked to as the frontline communicators and diplomats for the military.

“This lecture gave us a perspective on how we can tell the American public what we are doing in the military,” said Marine Corps Col. Jonathan Elliot, a FAO attending the course. “The training also reminded us of the roles reporters have to our mission and our service. They are not our adversaries.”

Savidge has worked as an embedded reporter with militaries from 11 different countries and has won numerous awards for journalism including nine local Emmy’s, a Peabody award for excellence, and was named the 2002 “Media Person of the Year” from the National Journalism Education Association.

The Eurasia JFSSPP course is the latest edition of NPS’ regionally-focused FAO continuing education program. The course consists of a week of lectures and discussions about various issues related to the students’ roles as Eurasia FAOs, while the second week of the program will take the students in country to Brussels, Belgium for additional cultural and regionally-specific training. The JFSSPP program holds approximately 4-5 courses per year for one of DoD’s fastest growing officer communities.