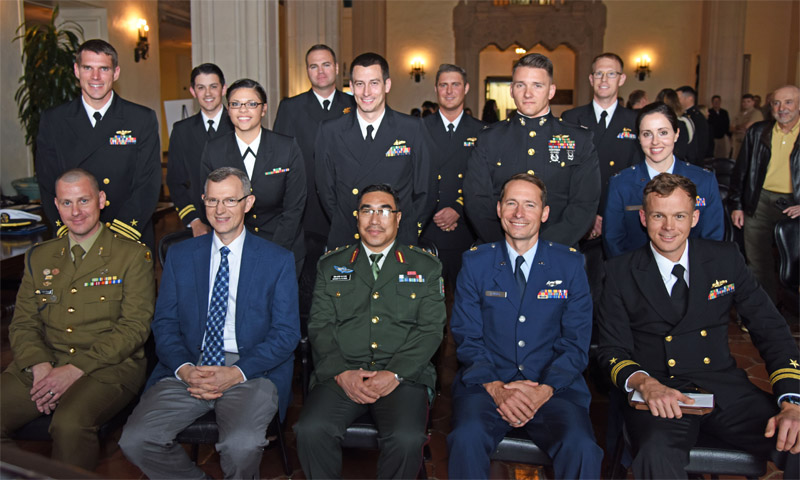 The Winter Quarter’s award-winning students and faculty are pictured on the Herrmann Hall Quarterdeck following the Quarterly Awards Ceremony, March 20. The ceremony recognizes graduates’ outstanding achievements in a variety of areas including academics, instruction, research and community service.

An audience of students, faculty, family and friends gathered in Herrmann Hall to honor the quarter’s top students and faculty during the Winter Quarter Awards Ceremony, March 20, recognizing achievements in areas such as academic performance, outstanding research, and service beyond the classroom.

Deputy Dean of Students Cmdr. Paul Rasmussen welcomed attendees to the ceremony, where a total of 16 students and faculty were honored.

“The students we are recognizing today have earned the highest levels of achievement in areas of academics, instruction, research and community service,” said Rasmussen. “It’s wonderful to have their friends, family and colleagues here to celebrate these accomplishments with them.”

“It ties us to the community better when we are out volunteering ... Then they feel NPS is part of the community rather than just inside the walls,” said Brant. “As president of the NPS Running Club and volunteering lots of time to the NPS Foundation, it’s nice to be recognized, but I would have done it anyway because I enjoyed how it enriched my time here at NPS.”

In addition to Brant, recognized for outstanding achievements during the 2018 Winter Quarter Awards Ceremony are as follows: