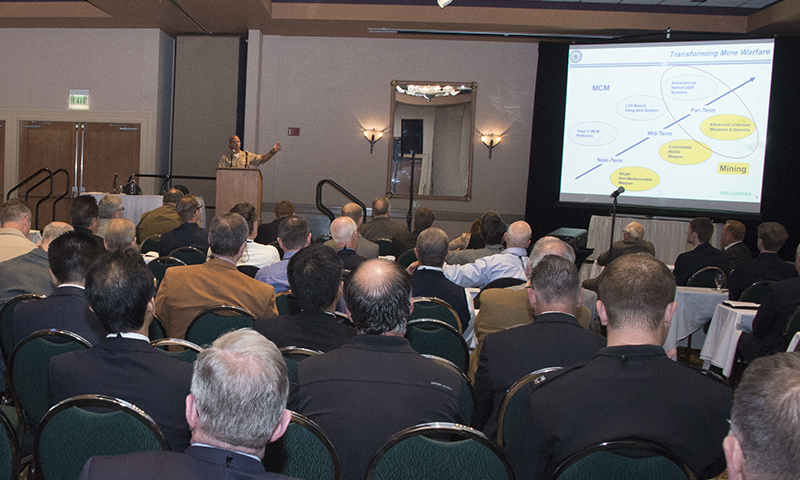 Commander, Naval Surface and Mine Warfighting Development Center Rear Adm. James W. Kilby addresses the audience during the 12th International Mine Warfare (MIW) Technology Symposium at the Embassy Suites in Seaside, California, May 24. The three-day biennial symposium is the only Navy-sponsored event solely focused on naval mine warfare and associated technologies.

Naval leaders, industry experts and guests from 12 countries converged on the 12th International Mine Warfare (MIW) Technology Symposium held at the Embassy Suites in Seaside, California, May 24-26.

The three-day biennial symposium is the only Navy-sponsored event solely focused on naval mine warfare and associated technologies with the theme, “Expeditionary Mine Warfare: Mine Countermeasures, Naval Mining, and Unmanned Systems.”

“By hosting pertinent events, such as the biennial International Mine Warfare Symposium, we escalate our chances of increasing combat effectiveness within the armed forces while making significant contributions to fundamental scientific, engineering, policy and operational advances that support the Navy, the Department of Defense, and other national and international security establishments,” said Route.

“It has occurred to me that we [as a community] are trying to do three things simultaneously,” said keynote speaker Director, Expeditionary Division Marine Corps Maj. Gen. Christopher Owens. “Replace our primary surface and air platforms with multi-use platforms, replace most of the systems and go mainly to remotely-operated systems to take the Sailor out of the minefield, and increase our clearance rates.

“The bottom line is we have been making progress towards this future force, but the progress has been choppy,” he added.

Some of the reasons for the uneven progress is the nearly $110 million cut to mine warfare programs over that last three years, Owens noted.

“Mine warfare is a very complex area, but when you get into the Pentagon and the Navy Yard, it gets even more complex,” said Owens. “In this area of resource constraints, each of the other resource sponsors is wrestling not with what should be funded, but with what can be cut with the least amount of damage.”

During the symposium, naval and industry speakers, and guests, had the opportunity to address a broad range of topics including the current status, operational reports, future concepts, requirements, mine countermeasures, technologies, unmanned maritime systems and concepts.

“There is good news, the CNO [Chief of Naval Operations] is very focused on rapid prototyping and getting prototypes out into the hands of Sailors … This helps us develop new tactics and procedures to help the [Mine Warfare] community,” added Owens.

The Littoral Combat Ships (LCS) Mine Countermeasures (MCM) Mission Package is also a major step forward in achieving the Navy’s goal of providing mine detection and neutralization capability that doesn’t put ships at risk in minefields, Owens noted.

“The key thing about a symposium like this is the sharing of ideas and working together [to solve problems],” added keynote speaker Commander, Naval Surface and Mine Warfighting Development Center Rear Adm. James W. Kilby. “We need to be able to experiment throughout the community on ideas, and expend some energy at the academic level, such as NPS.”