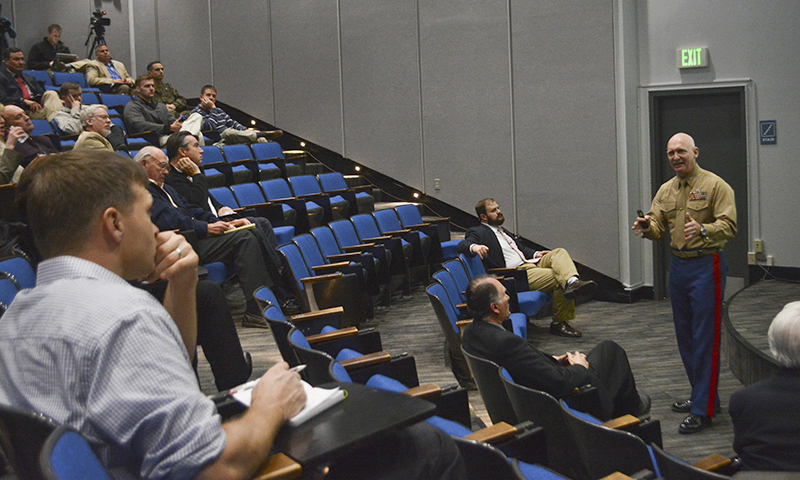 “This is a very exciting session, in line with earlier presentations on big ideas, where we talk about the business of design and design thinking here at the Naval Postgraduate School,” said Arquilla. “We are focused on something that the Navy is increasingly interested in, and we will introduce to you ideas to counter the threats posed to our naval vessels.”

Arquilla elaborated on the purpose and reason behind why ideas should be big, and the effects those ideas can have when they are put in practice.

“We’ve previewed some very big ideas at the Naval Postgraduate School that have serious traction in the real world. For example, in the battle for Mosul, a couple of our students and professors have created something that gets around very restrictive rules of engagement over in Iraq,” said Arquilla. “They created something called remote, advise, and assist (RAA) that helps our allies in the heat of battle.”

Arquilla then passed the floor to Associate Professor of Physics Dr. Joseph Hooper who introduced a new direction that could be used in the next generation of explosives for the U.S. Armed Forces.

“I believe that by combining metals, in a special way with explosives, that when they combust, these metals will release a lot of energy, and I can get more combined energy from this explosive and metal system than what I could get from just explosives alone,” explained Hooper.

Hooper educated the audience on the effects of burning metal, and the energy that it releases upon catching fire. But the problem is, how do you catch metal on fire?

“Aluminum has a protective layer around it that prevents it from catching fire immediately, so we must find a way to prevent it from building a protective layer,” said Hooper. “If we combine it with the proper metals and flammable material, it will be a far more effective medium that can be used in newer, smaller explosives, that will cause exponential more damage where needed.”

Associate Professor Bradley Strawser spoke about the ethics of war, the distinctions between combatants and non-combatants, and the effects of technology on precision-guided munitions.

“It’s a great tragedy of warfare, as everyone in this room may know, that civilians do die, but something about civilian death is especially egregious,” said Strawser. “The good news is that a military technology continues to change and become ever greater.”

The ability to select a target and take into consideration if there are non-combatants in the area of the blast is only one of the technological changes in warfare that has been improved on.

“It seems that the actual technology that we employ unleashed tremendous force, a power the world has never seen before, and warfare brought with that incredible devastation for noncombatants,” said Strawser. “But the future is bright for the idea of how we can wage war justly, and protect noncombatants.”

Denning and Lyons ended the session with a talk about the need for military innovators, and how the need has never been greater.

“Innovation is going to create those opportunities for the future in ways we never thought of before, some of the drone technology will help us to have an understanding of what’s over the hill like we’ve never had before, and this will save lives,” said Lyons. “As we develop greater technology, automation, AI systems that will help us understand what is going on in the battlefield, this will make our forces stronger and more efficient.”

Innovation, design thinking, and advances in technology are major forces at play in war, and NPS is at the tip of the spear when it comes to these forces, concluded Arquilla.

“We hope you perceive the Naval Postgraduate School as a place of big ideas. We are here because we believe the big ideas matter, and we believe that ideas make a difference,” said Arquilla. “Did the Stone Age end because we ran out of stone? I don’t think so. It ended because someone realized that there was something in the stones that could be turned into something else.”