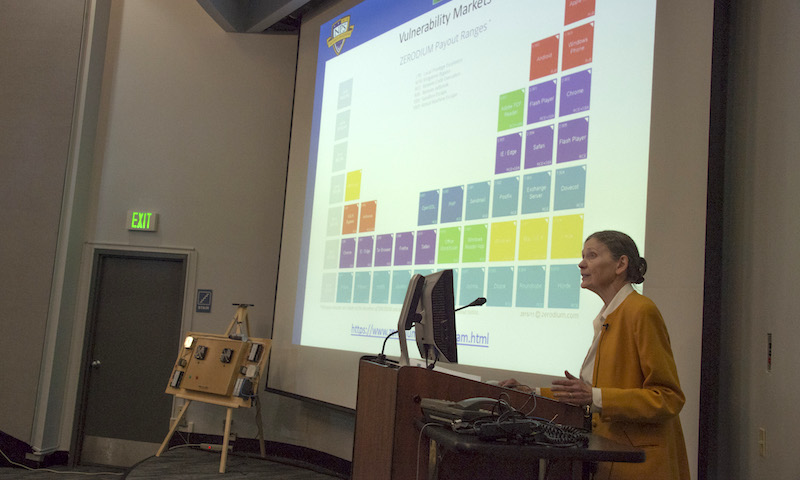 “We want to find insights with the potential to bloom into something big and beautiful that the Navy can use,” said Denning. “Innovation doesn’t happen with a snap of the fingers, it takes time. It starts with a seed that doesn’t look like much, then it unfolds.”

Denning refers to that moment of insight as a “fulgor,” which is Spanish for a dazzling light.

“The existing ground in which a fulgor appears is the set of existing practices, technologies and concerns of the human community,” said Denning.

Denning and his colleagues are working to set the conditions whereby they will foster the fulgors that lead to big ideas in the minds of their students. Their goal is ambitious, indeed, for big ideas are more than passing bursts of inspiration, they are game-changers that allow people to see the world in a different way. Past big ideas include great jumps in human thinking and ingenuity like the theory of relativity or powered flight, assembly lines and the creation of the Internet.

This year’s exchange showcased the work of Distinguished Professor Dorothy Denning, Professor John Arquilla, Associate Professor Dave Alderson and Navy Cmdr. Zachary Staples. Each presenter was chosen for his or her innovative work and insight into the realm of cyber security.

She also walked attendees through the complexities of software systems that many take for granted, noting the “millions of lines of code” contained in modern operating systems. This complexity, she argues, has led her to think of “not the Internet of things, but the Internet of vulnerabilities.”

Alderson also discussed vulnerabilities, focusing on the vulnerabilities that complexity poses to critical infrastructure, as well as strategies to increase system robustness. He likened the robustness of cyber systems to both living and inanimate things noting that of the 4,747 genes found in an e. coli bacterium, only 302 are essential.

“The rest, like in an automobile, make the organism more robust,” said Alderson. But he cautions that the same set of characteristics that make both organisms and automobiles robust, may lead to fragility.

Staples discussed cyber system vulnerabilities as well. He focused on what he called the rise of cyber physical systems – cyber systems that interact with the physical world in a manner that makes the massive urbanization of the earth’s growing population possible.

“You cannot feed 10 billion people without complex machines working together to generate the food [and infrastructure services] necessary to keep that many people alive,” said Staples.

Staples argues that the complexity of cyber physical systems not only creates vulnerabilities, but that it necessitates a change in the way that people think about warfare. He notes the 160 plus million people who live in Bangladesh, a country the size of Missouri, and points to the folly behind investing in extremely expensive combat systems like the Joint Strike Fighter, which he believes will have little value in an urban fight.

“In 1991 we proved that if you build a physical structure on the earth, we are going to hit it with a Tomahawk [missile] … [but] few of our technologies will get to a target [in a large city]. Humanity is going to continue to multiply, and its going to multiply in urban environments controlled by cyber physical systems.

“If you want to hit a target like that, you hit the systems that make it possible,” said Staples.

For Arquilla, who is widely credited with predicting the advent of modern cyberwar, warfare in the cyber realm is the continuation of a process whereby over time, innovative warriors used information to make better use of weapons that project mass and energy.

“The group with the information advantage wins … You have to think of weapons systems in terms of their information content not just mass and energy,” said Arquilla. “Up until 20 years ago, [the goal of] warfare was to turn people into automatons … Today, the big idea is the reverse. We are now trying to pour human judgment into intelligent machines.”

Arquilla illustrated his point by highlighting the early use of the rigid, but effective phalanx formation by Greek soldiers.

“It was a robust system that lasted for centuries,” said Arquilla, but it gave way to the Roman legion that had more formations to choose from and greater flexibility. Arquilla also referenced the dominance of the so-called Mongol hordes, that used the sharing of information by riders across their vast empire to amass and employ armies at specific places and times to devastating affect.

Arquilla argues that the efficacy of weapons systems increases in relation to the amount of information that is mixed with mass and energy, and he points to the success of small, networked groups that use these characteristics to accomplish their goals.

“What terrorists know today is that almost any level of violence, almost any outrage, will have an informational affect that will go around the world, and they will ride the rails of the Internet, the World Wide Web, and broadcast media. They will command the world’s attention.

“It's a fundamental upending of all of our thinking about issues of mass, energy and information. That is why 14 years after 9/11, these networks are still on their feet and fighting. The requirements of mass are very, very low,” said Arquilla.

For Arquilla, all of this points to a need to change the way we think about combat systems.

In closing the exchange, Peter Denning emphasized that, while the presenters have showcased many similarly powerful ideas, innovation at its core is really about people.

“[Innovation] is a social idea … Innovation happens when people adopt the practices made possible by a new technology,” said Denning. “All over campus, faculty and students are searching for insights, and through our actions as designers, some of them blossom into solutions to Navy and DOD problems.”