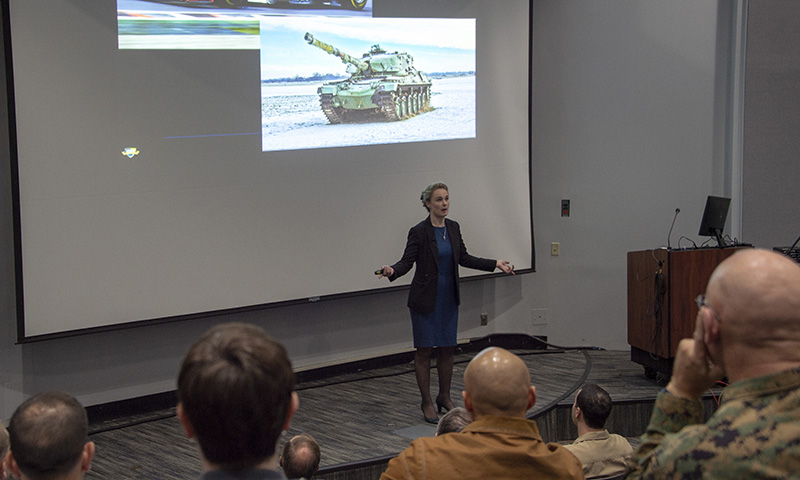 Naval Postgraduate School (NPS) faculty and students researching the cutting-edge of how the U.S. can gain an advantage in cyberspace shared their game-changing research during the latest Big Ideas Exchange (BIX), Nov. 30.

“We become academics because we believe ideas matter,” said Dr. John Arquilla, chair of NPS’ Department of Defense Analysis, and one of the organizers of the BIX series along with Dr. Peter Denning of Department of Computer Science. “I hope you will agree that, in the cyber arena, we have come up with fresh perspectives that have the potential not only to improve our competition for cyber advantage, but to reduce the terrible disadvantages under which we’ve been laboring for so long.”

“NPS is an institution based on the notion of the power of ideas,” he said. “We all believe Victor Hugo’s statement that there is no army more powerful than an idea whose time has come. We don’t always have to change the whole world, but there are parts of it that require changing. Certainly, cyber security is one of those parts.”

Lt. Cmdr. Nate Richardson, an NPS student in computer science, talked about a WWII practice where U.S. radio operators identified operators of adversary nations based on patterns in their transmission styles, or their “fist.”

Richardson’s research examines a modern approach to the same end, using network traffic analysis and behavioral biometrics to create a “digital fist” that can be used to identify anonymous persons threatening cyber security.

“Posing as a vulnerable user in hopes of interacting with a threat, we’ll extract his digital signature without his knowledge,” said Richardson. “It will create a database of attacker fists that can be shared across defensive platforms so they can be recognized and stopped.”

Dr. Britta Hale talked about how advanced cryptography is used throughout our daily lives, especially with the rampant expansion of the Internet of Things. She advocates for a set of cryptographic standards that will provide a baseline of security.

“If people actually understood what they were putting together, cyber security at the most fundamental level, then maybe their work won’t be the weak point,” said Hale. “That means embedding cryptographic training at every level … from the developer so he will know which part to choose and how to piece them together for the system, to the manager who is making the decision about the system and needs to know how to make it run the way it’s intended.”

Switching from the technical side to the intellectual side of the struggle for cyber advantage, Dr. Bret Michael highlighted the importance of international law, and clear rational thinking, in the cyber realm.

“We have a choice now,” said Michael. “We can either repeat history, which we often do intentionally or by accident, or we can move forward. A lot of what we see today in warfighting is fearmongering… We tend to get caught up in this self-feeding frenzy to carry out an arms race. I’d like to see that we don’t carry this over to the cyber realm.”

Michael said that by sticking to the facts and not having a kneejerk reaction to every unverified editorial, resources can be used more efficiently allocated to maintain a cyber advantage.

“Instead of thinking more about competing with one another,” continued Michael, “try to cooperate and build trust in each other so we can share this wonderful environment that we call the Internet.”

Referencing the big ideas brought up from the previous speakers, Denning talked about how recognizing digital fists, using the right cryptography, and clear thinking, could be woven together in an effective mechanism to provide the U.S. with a definitive advantage in cyber.

“We’re often talking in security about guarding against vulnerabilities, which are weak points in the system that can be attacked – such as software, bad configurations, anonymous requestors, and human frailties,” he said.

Just as a strong rope is woven from many weak strands, Denning added, combining several simple practices such as two-step verification and trusted enclave networks using the right crypto can yield a strong security system.

“The rope will be stronger than its individual threads,” he noted, adding half a dozen straight-forward security practices that, if implemented together, would strengthen most systems against most attacks.

“We feel that the Big Ideas Exchange is an opportunity for officers during their time at NPS, to engage in deep introspection about major problems that they won’t get anywhere else in their military careers,” Arquilla said. “We want to make that as worthwhile as we possibly can.  That’s why we go after big ideas. We’re big game hunters, and we do it with big ideas.”