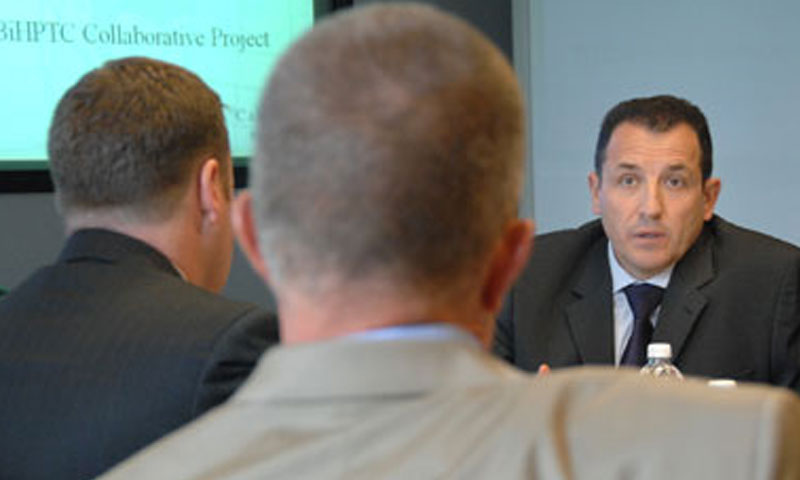 Bosnian Minister of Defense, Dr. Selmo Cikoti?, engages leadership from NPS as the designated U.S. Partnership for Peace Training and Education Center (USPTC) in discussion about the development of defines-relevant curriculum during a visit to the university on June 29.

At any level, education is widely recognized as an investment in the future. Here at NPS, the goal is to provide a quality, defense-focused education that military officers from around the world can use as they move forward in their respective services. The payoff for that investment, then, is far more than earning potential or career promotability, it’s about improving the national security of the United States and our partners. And sometimes, it’s also about helping youthful democracies through the angst of growth.

In 2004, NPS was asked to apply its experience in global defense education to promote NATO’s mission through the university’s designation as the U.S. Partnership for Peace Training and Education Center (USPTC), the only one in the U.S. and one of 15 PTCs in the world. The Partnership for Peace (PfP) program, coordinated by NATO, pairs member nations with ‘partner’ nations, the distinction given to those on their journey to NATO membership. In this capacity, NPS cooperates with militaries and governments of these partner nations to help identify areas of opportunity, and to create sustainable training and education programs. NPS has worked with several countries from around the world – Switzerland, Sweden, Singapore, Bosnia and Herzegovina, Jordan, Moldova and Egypt – on various NATO peace-training activities.

In late June, Bosnian Minister of Defense, Dr. Selmo Cikoti?, visited the NPS campus to meet with the USPTC staff to coordinate on their own peacekeeping efforts for troops in the Bosnia and Herzegovina (BiH) Peace Support Operations Training Centre (PSOTC), also a designated PTC. The partnership includes a three-year proposal for developing and implementing curriculum designed for educating and training Bosnian troops in areas most critical to their national security. Visiting NPS with Cikoti?, the BiH equivalent to the U.S. Secretary of Defense, were Cabinet Chief Senahid Godinjak and PSOTC Commandant Col. Kenan Dautovic. During their week at NPS, the group met with USPTC leaders to discuss the partnership, and the curriculum development.

“The world is changing to the extent that we globally feel the consequences,” said Cikoti?. “Many security challenges have become completely global. No one country on its own can provide security; we are more and more interdependent.

“Those security challenges are becoming more and more complex and they require the dynamic, comprehensive and holistic approach of education,” he continued. “The Naval Postgraduate School represents an educational institution that is keeping a good pace with the changing and dynamic nature of world security threats and systems. We believe the benefits of cooperating with NPS are multiplying not only in education and curriculum, but in the mindset of the people. Because in times of change, you change everything else more easily than the mindset of the people.”

The curriculum focuses on three main areas of opportunity for BiH to promote in educating and training their troops. The first area of focus is gender inclusion. The goal is to better engage both men and women in security, defense and peacekeeping based on creating a workforce that draws on all perspectives and capabilities, thereby increasing operational effectiveness in these sectors. The second area is building integrity, which is the NATO term for anti-corruption – promoting transparency and honesty within leadership will establish a more secure government. The third area of focus is strategic collaboration. Strategic collaboration essentially hopes to establish a basis for organization and collaboration between agencies to promote a more cohesive and timely response to the national security challenges.

One aspect of the strategic collaboration curriculum is to help facilitate and organize demining efforts, a critical area of opportunity for improvement in the recovering nation. Roughly 30 percent of BiH is still marked with mines or considered potential minefields. NATO gave BiH until 2009 to clear all of their landmines, but the task proved more monumental than expected, and their deadline was extended to 2019. The problems lie not with the technologies or capabilities of BiH but with the organization for utilizing the resources.

“The demining problem still represents one of the major security challenges for our country,” noted Cikoti?. “We have demined and cleared a huge area, a huge percent of our state territory, and we gained demining experience the hard way. We believe that NPS recognizes this fact and is willing to invest in our niche capacity. We believe in a few years time that we will have the country cleared of mines. Somewhere around 2018 or 1019. The first estimate was very discouraging, but now we are much closer.”

The goal of the partnership is to enable BiH to sustain their peace training even when the NATO members pull out of the country. A Memorandum of Understanding was established in September 2003 between the United Kingdom and BiH to create the PSOTC, and construction on the training facilities began in March 2004. The UK made those contributions to BiH as part of their membership with NATO, providing several staff members to the newly-established PSOTC to facilitate the training. Within the next few years, the UK hopes to transfer the PSOTC completely to the BiH government to carry forward on their own. The USPTC hopes to contribute to that goal by providing a sustainable curriculum that can be maintained and implemented even after the international partners leave BiH. 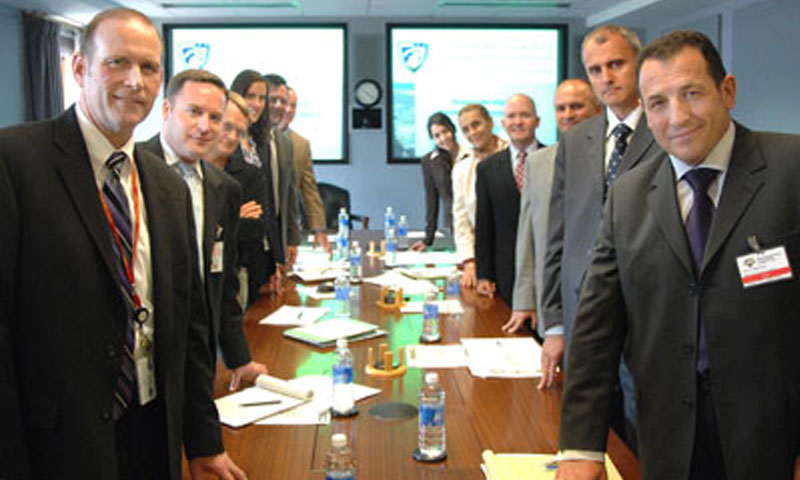 Bosnian Minister of Defense, Dr. Selmo Cikoti?, engages leadership from NPS as the designated U.S. Partnership for Peace Training and Education Center (USPTC) in discussion about the development of defines-relevant curriculum during a visit to the university on June 29.

“We have been talking to the University of Sarajevo to see what their interest would be in partnering so that once we begin to phase out our activities, there might be an opportunity to build up a better relationship between the University of Sarajevo and the PSOTC in order to be able to sustain the content areas, especially in the gender issues,” explained Tom Hazard, USPTC Program Director. “The women’s issues, that’s not a core capability right now at the PSOTC, and we are trying to work with them to make sure they have the assistance they need to carry on with that.”

Cikoti? also spoke to the Defense Resources Management Institute (DRMI) about the role of planning, programming, budgeting and execution within defense structures. As a new and developing democracy, BiH has struggled to overcome the devastation of the Bosnian War that ended in 1995. Partnerships like those with NPS help BiH to build a strong foundation for their state structure and establish themselves as a viable candidate for NATO membership.

“We have been undergoing a very demanding reconstruction and change period,” said Cikoti?. “We are recovering from a grave and devastating war, and the best way to get people back on track is through education. Education represents the best way to institutionalize certain changes. If you want some change to last for long periods of time, the best way to make it is to make that change become part of your educational system. Education in our case represents more than education itself. It’s an investment into our future.”