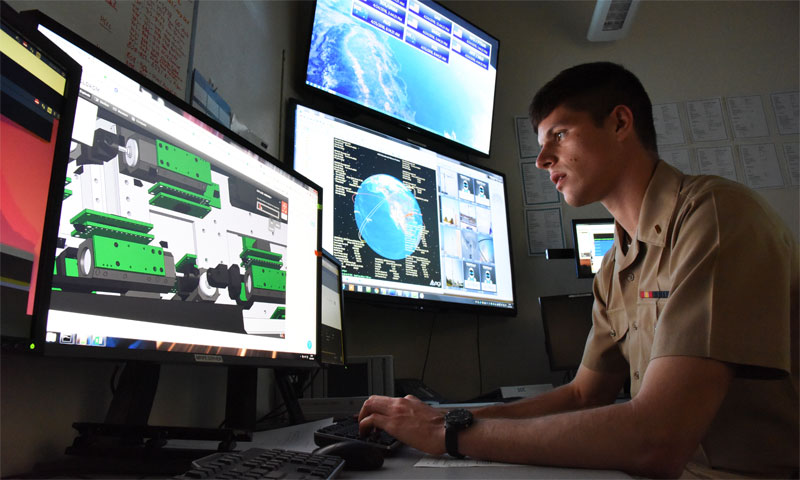 Space robots will be launched into orbit this summer by a team of junior Navy officers in a test which has the opportunity to bring significant change to how the Department of Defense (DOD) operates assets in the extraterrestrial domain.

“AMODS basically gives satellite operators another opportunity to interact with their spacecraft once it’s in orbit,” Hanlon said. “Currently, after a spacecraft is launched, it is nearly impossible to physically interact with it again. AMODS can change this.”

Until now, satellites have been a costly, one-shot deal. Once launched into space, the satellite is subject to myriad natural shocks ... Solar arrays or antennae may not deploy correctly, components fail, wear and tear degrades capabilities, etc. Operators are left guessing what went wrong, sorting through telemetry to figure out why a component didn’t act the way it should.

If and when the spacecraft fails, there is nothing left to do shy of mounting a prohibitively expensive recovery mission.

“With AMODS, you have that additional diagnostic information so that you know exactly what went wrong and how it went wrong,” Hanlon said. “You have a picture of the failure so you don’t have to play a guessing game and you can either solve the problem or at least prevent yourself from making that same mistake in the future.”

With the establishment of space as a domain of military conflict, AMODS can also provide a critical advantage. When a space asset goes down, it becomes imperative to immediately know the exact cause.

“We’ll be able to correctly identify exactly what caused the fault so it’s not misattributed to hostile action or space weather,” Hanlon said.

Plus, it’s a breathtakingly cost-effective solution. An individual AMODS unit has a hardware cost of approximately $22,000. In contrast, NASA space shuttle missions to maintain the Hubble Space Telescope were valued at $900 million each.

“I like to think of AMODS as a$22,000 insurance policy to prevent you from making the same mistake multiple times,” Hanlon said.

In 2004, an SSL Telstar 14 satellite suffered a crippling solar array failure. Despite spending $13 million to figure out what went wrong, SSL was never able to determine its cause. Seven years later, its replacement Telstar 14R satellite met a similar fate, and the company spent an additional $22 million to troubleshoot the issue. The next year, in 2012, the solar panels on another of its satellites failed.

“Had SSL been able to capture images of the failed 2004 spacecraft, their diagnostic analysis could have been much less expensive,” Hanlon said. “Real-time images could have provided SSL with the data they needed to realize the flaw wasn’t with the deployment mechanism, as originally assumed, but with the solar panel itself.”

Hanlon is about to test this out.

In early June, a Rocket Lab Electron rocket will blast off from the Mahia Peninsula in New Zealand, carrying into space a payload of multiple CubeSats, miniature space research satellites developed in 1999 by California Polytechnic State University and Stanford University.

Among these will be several ‘repair CubeSats’ (RSats) built by Hanlon and his team. These RSats have robotic arms which are able to latch onto host satellites and crawl around, image and potentially repair various components.

If not directly embedded inside a host spacecraft, RSats could be delivered by the second component of AMODS, a self-propelled transport CubeSat (BRICSat).

“BRICSat is basically a little jet pack that you can strap to the back of an RSat,” Hanlon explained. “If you have sort of a big bucket of RSats, the BRICSat just picks up an RSat, drops it off at the spacecraft, goes back to the bucket and grabs another RSat for the next spacecraft.”

Operating these from NPS, Hanlon will run AMODS through a series of exercises to demonstrate their capabilities.

“We’re going to take what’s been done on the ground, put it in a box, send it to space and accomplish some complex tasks with the robotic arms,” Hanlon said. “What we’re looking to do now is continue to test the robotic arms and confirm that they’re able to do the missions we’re picking for it.”

Working with NPS has allowed Hanlon to take AMODS to the next step. AMODS was conceived and prototyped by Hanlon and his team as the culmination of their undergraduate work as midshipmen at the Naval Academy. For this work, the midshipmen received the 2016 Secretary of the Navy Innovation Scholar Award.

Halfway through the development process, however, they hit a wall.  As a government organization they weren’t allowed to use amateur radio frequencies without an appropriate license.

NPS had the appropriate professional frequencies, and it was the beginning of a beautiful relationship. Hanlon graduated the Naval Academy in May 2017, and as a Bowman Scholar, hit the ground in Monterey, Calif. to begin his NPS graduate work within a month.

“NPS was invaluable in supporting the effort and making sure that we’d be able to get the licenses,” Hanlon recalled. “I was fortunate enough to come out here and help bridge the gap between the two institutions and get the ground station set up so that we can talk with the spacecraft.

“We would not have been able to do it without NPS,” he added.

Throughout its time in orbit, AMODS will provide NPS faculty and students the opportunity to explore data and experimentation of the dynamics of a robot in space.

“It’s the first time, certainly on the space side of things, that we’ve had the opportunity for this tightly knit collaboration, and we’re looking forward to continuing that as we move towards the future,” Hanlon said.

AMODS will be in orbit for a year before burning up on re-entry into the earth’s atmosphere.