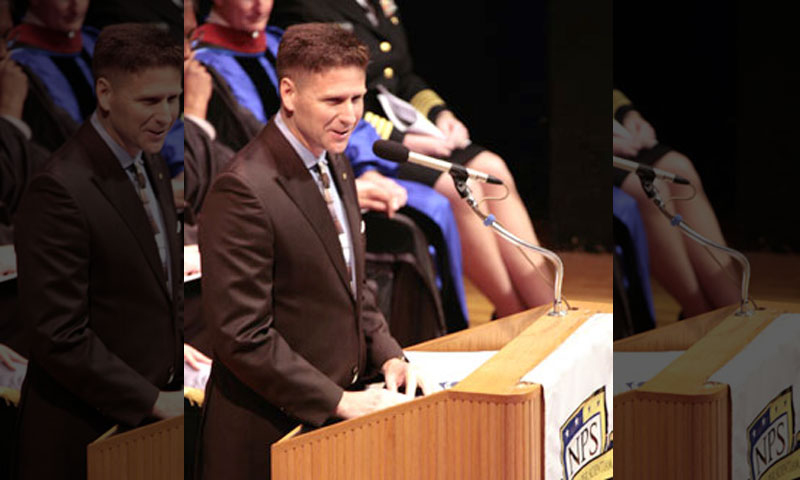 Assistant Secretary of the Navy for Manpower and Reserve Affairs, the Honorable Juan M. Garcia, III, keynoted this quarter’s graduation ceremony, telling the class of nearly 250 graduates, “You were chosen for this prized opportunity because you are the best, and because you’ve demonstrated personal potential for making critical contributions to our Navy and our nation.

NPS President Daniel Oliver kicked off the ceremony by introducing the keynote speaker, Assistant Secretary of the Navy for Manpower and Reserve Affairs, The Honorable Juan M. Garcia, III.

“It’s my honor and privilege to introduce Assistant Secretary Garcia, who truly appreciates the power of graduate education and the value of the Naval Postgraduate School,” said Oliver. “We are extremely fortunate to have him in this position of leadership in the Navy today.”

Garcia was quick to return the compliment to a kindred spirit.

“In my career, I got to stand on Admiral Oliver’s shoulders in the P-3 community, where he was an icon,” Garcia said. “I followed him to Harvard, to a White House fellowship, and I’m now privileged to play a role in managing the Navy he helped to shape as Chief of Naval Personnel.”

Garcia then turned to the Winter class.

“It’s an honor to be here 100 years into what’s been called the Navy’s ‘crown jewel,” he said. “In these halls and classrooms have passed heads of state, astronauts, the [current] Chairman of the Joint Chiefs of Staff, chiefs of naval operations, commandants of the Marine Corps, the ‘father’ of the nuclear Navy, and the architect of the Aegis Navy. Today, you’ve become a part of that incredible legacy. You were chosen for this prized opportunity because you are the best, and because you’ve demonstrated personal potential for making critical contributions to our Navy and our nation … You are the new leaders of a military that will provide a state-of-the-art anti-ballistic missile defense over the entire free world, but also maintain the capability to take out three pirates with three bullets. Congratulations on your selection and congratulations on graduating from this elite, world-class institution.”

The about-to-be graduates had gathered earlier in King Hall for the Winter Quarter Awards ceremony to recognize outstanding fellow students and faculty who had attained the highest levels of achievement in academics, instruction, research and community service.

Kicking off the Mar. 16 ceremony was the awarding of two Bronze Star Medals to Lt. Cmdr. Hak J. Kim and Cmdr. Joe C. Shipley. Kim received the honor for meritorious achievement in connection with combat operations as a Joint Task Force intelligence officer in support of Operation Iraqi Freedom in which he “ensured the success of numerous ground combat operations resulting in the capture of several high value individuals and the capture or elimination of hundreds of enemy personnel.” Shipley, who served with U.S. Navy Headquarters and Headquarters Company, 13th Sustainment Command (Expeditionary), also received his medal for exceptionally meritorious service during Operation Iraqi Freedom which “contributed to the overwhelming success of the command’s mission.”

“I highly encourage anyone with the opportunity to come to the Naval Postgraduate School,” said Price. “I had a great experience at NPS, which is a top-notch university with a great reputation, and I’m really impressed with the quality and professionalism of the faculty, who are extremely adept at applying theory and principles to real-world military issues. I’ve already put these to good use assisting with current Marine Corps manpower issues and will definitely employ them in my next assignment.” After graduating, Price reports to Headquarters Marine Corps, Manpower and Reserve Affairs as the Reserve Plans Officer in Charge. 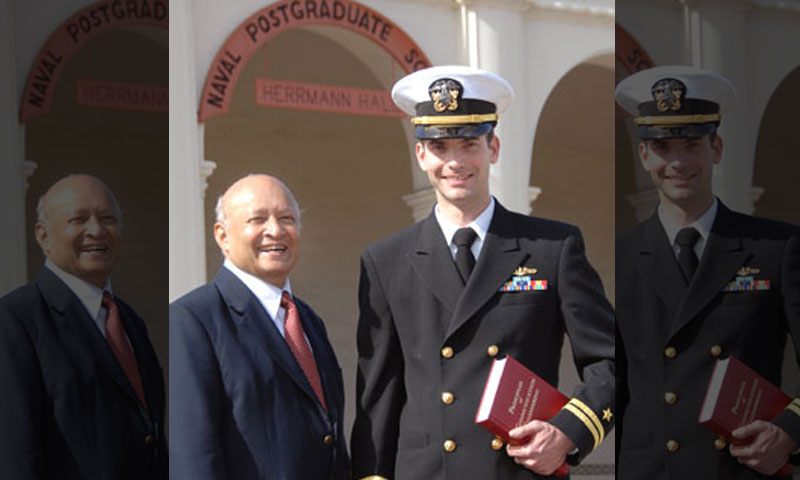 A special and historic moment in the student awards ceremony was the presentation of the Armed Forces Communications and Electronics Association Award to Engineering Duty Officer Lt. Nathan P. Geisinger. Along with the award, Stanford University Professor Emeritus of Engineering Dr. Thomas Kailath presented Geisinger with a copy of the pioneering textbook “Principles of Communications Engineering” co-authored by NPS’ former Dean of Research and Distinguished Professor Dr. John Wozencraft and Wozencraft’s MIT alumnus colleague Dr. Irwin Jacobs, which is still in use today. The book bears inscriptions by Jacobs, and by Kailath on behalf of Wozencraft.

After graduation, the Winter 2010 class gathered in the Barbara McNitt Ballroom in Herrmann Hall with excited family members and friends to celebrate and witness the cutting of the class cake. The honor of cutting the first slice with the ceremonial sword went to Navy League Award winner Price.

“NPS has world-class instruction in a place that is steeped in history and tradition,” said Operations Research graduate Lt. Robert “Buddy” Robinson following the ceremony. “A degree from NPS definitely enhances your career opportunities and helps you advance within your service.”

Homeland Defense and Security (HDS) program graduates Lt. Vinicio Mata of the Sunnyvale, Calif. Department of Public Safety and Capt. John Ferry of the City of Scottsdale, Az. Fire Department celebrated together after the cake cutting.

Asked if he’d recommend the security studies program to other first responders, Ferry didn’t miss a beat. “Do it,” he said. “There’s no other program like this, where practitioner-scholars are bringing forth ideas that will change the next generation of Homeland Security leaders. I almost can’t imagine not being here,” he added, “as there’s no part of the program that hasn’t touched my life.”

“Doing the NPS Homeland Security and Defense program was one of the best decisions I’ve ever made,” agreed Mata. “It was extremely challenging, but the outcome is awesome and the results benefit not only yourself in your career, but your entire department, region and nation.”

“What I enjoy most about graduations is talking with the students and finding out what they’ve accomplished, where they’re going, and how they’re going to use the expertise they gained here at NPS in their next duty assignments,” said NPS Vice President and Dean of Research Karl van Bibber. “As just one example, I talked with a German naval officer who will be immediately applying what he learned in his master’s in public policy program to a major reorganization of the German Navy.”

Of the 246 graduates, 112 came from the Navy, 21 Marine Corps, 22 Air Force, nine Army and one each from the Coast Guard, National Guard and U.S. Naval Reserve. The class also included 60 Department of Defense civilians and 19 international students from allied and coalition countries. Degrees awarded were two Ph.D.s, 109 Masters of Science, 76 Masters of Arts, 54 Executive Masters of Business Administration, seven Masters of Business Administration, one Electrical Engineer, and three dual degrees. Sixty-five degrees were awarded to students unable to attend due to operational commitments.