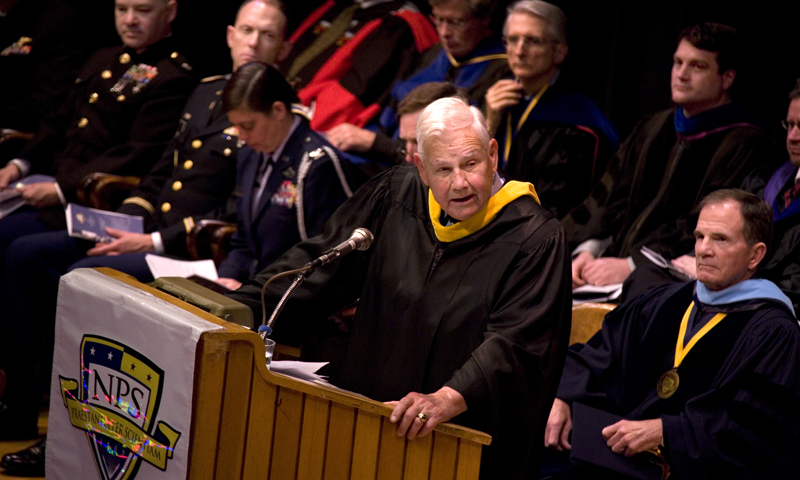 “You should be justly proud of what you have accomplished here. We will be proud to call you NPS alumni, and look forward to hearing great things from you in the future.”

With these words by university President Dan Oliver, so began commencement ceremonies for the fall quarter’s round of graduates. In introducing this quarter’s guest speaker, retired Navy Captain and NPS Professor of Practice Wayne Hughes, Oliver remarked, “He is a universally esteemed colleague among his peers, a revered mentor to his students … One of the great pleasures of my tenure here is that it has overlapped some of his.”

Hughes highlighted his keynote address by reminding these new graduates that, as they return to their services, they are following in the wake of generations of NPS alumni who have impacted the world around them.

“Some of you have suspected, correctly, that we professors work you like dogs – but that is only because you are dogs of a special breed,” he noted in jest. He continued by recalling memories of visiting Anchorage, Alaska, for the start of the famous Iditarod dog sled race. He remarked how the sled dogs are anxious to run, focused on pulling the sled. “These dogs didn’t have any sense of winning, but what they wanted to do was pull with their buddies. This was their joy and cast in life.”

He remarked on the sense of joy the drivers must have experienced in helping guide these determined, majestic animals. He likened the sled drivers to NPS' cadre of professors, who help guide their students as they pull through the challenges of academia, maturing from their experiences, and all the while returning the favor to their guides as the faculty, themselves, become wiser along the way.

He commented that the graduates all come from diverse personal backgrounds and professional duties but are returning to their jobs better equipped to take more varied tasks in the future. He noted that in order to be effective officers, the graduates must be able to adapt and do it fast. He added, “Expand your horizons, because this is the essence of leadership.”

Hughes closed by saying, “This is not an egalitarian creed that aspires to achieve equal wealth and happiness for everyone in society. In my society, in the Navy, at the Naval Postgraduate School and the nation, I look for the lions. They are the leaders who will take charge selflessly and make a better society … To the graduating class, I ask you to find two or more lions and nurture their careers, to make our entire profession a better one.”

Hughes commented that he was very flattered to be invited by Oliver himself to be this quarter’s guest speaker and, noting that he aspired “to try to give a speech that is worthy of me, worthy of the school and worthy of the graduates.” Hughes has more than 60 years of service to the nation, to include 30 years of active duty military service. “The reason I’ve stayed around here so long is that these are the best students in the world,” he added. 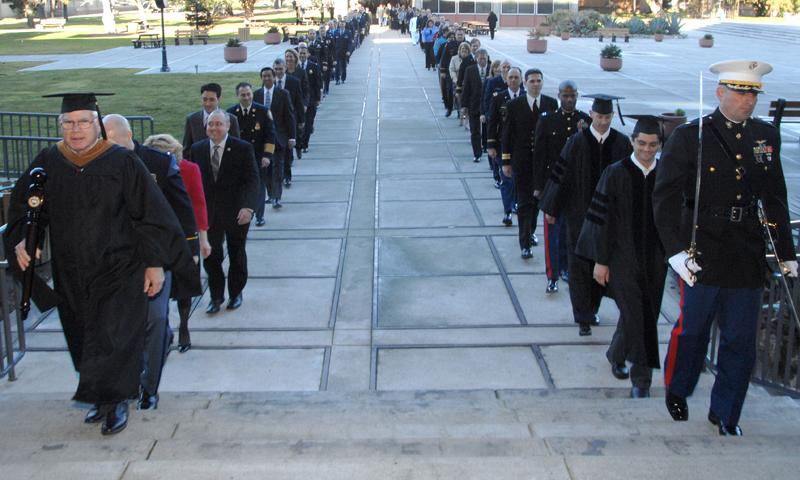 Graduates cross Spruance Plaza during the graduation procession for the Fall Quarter commencement ceremonies, Dec. 16. A total of 365 students earned advanced degrees during this quarter’s ceremony.

Lt. Cmdr. Sarah F. Michael is the Fall quarter’s recipient of the Monterey Council Navy League Award for Highest Academic Achievement. She said, “I am extremely honored to have been nominated for the Navy League Award, and even more so to have been chosen as this year’s recipient. My tour at NPS and in the Monterey area has been a time of significant personal and professional growth. I am very grateful to the Navy for the opportunity to be here, and I hope to someday return to the area for a Ph.D.”

Capt. Yuval Nevo of the Israeli Air Force won the Outstanding Academic Achievement Award for International Students. He commented that his time here at NPS was an amazing experience for him, due in part he says to Operations Research (OR) department faculty and the enriching interactions with other OR students.

“The professors are very dedicated to our success and our understanding of the things we study, especially my thesis advisors from whom I learned a lot with the many valuable lessons they provided,” remarked Nevo. “I learned a lot about OR from the other students and their many other perspectives both American and international, which was an amazing experience,” he added. “And I did try scuba diving while I was here, which is not something that I did in Israel. California is one of the best places in the world to see, hike and travel around.”

A total of 365 students earning 369 degrees graduated this quarter, with 316 students crossing the stage in King Auditorium to receive their diplomas. A total of three Ph.D.s were awarded along with two engineer degrees. Two individuals earned dual degrees and one earned a triple degree. This quarter's class included 62 International graduates representing 21 different countries.