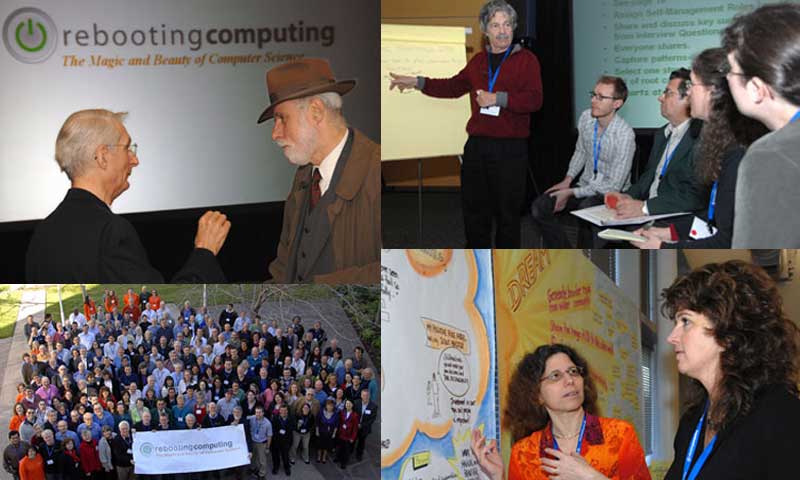 To radically change the way younger generations are looking at the computer science field, the Naval Postgraduate School (NPS) Cebrowski Institute for Innovation and Information Superiority recently invited more than 200 representatives and leaders from academia, industry, the media and government to a three-day working summit, "Rebooting Computing: The Magic and Beauty of Computer Science," at the Computer History Museum in Mountain View, Calif.

To address the issue, the design team developed an appreciative inquiry (AI) organizational summit facilitated by NPS Prof. Frank Barrett and Case Western Reserve University Prof. Ronald Fry, which required key stakeholders from around the world to actively participate in a collective discussion.

"One of the reasons we chose the appreciative inquiry process is that we want to produce some movement in the field; many people are feeling stuck," Denning said. "The process has a good track record of doing that. It works by finding the common ground among the diverse communities participating, enabling them to become unstuck."

Dr. Vint Cerf, Vice President and Chief Internet Evangelist for Google, who is also known as a "father of the Internet," joined the summit's design team, because he believes computer science and information technology are vital assets to the country. "If we don’t rethink the way in which we introduce this subject to people so that they appreciate its core value...we will actually lose a very important capability that has made us competitive. So this meeting is critical in my view, because it's forcing us to think about how to reintroduce computing as a subject of relevance to a large population," he said.

On the first day of the summit, participants were divided into small groups and asked to reflect on their past experiences in the computing field. Individuals then shared what first sparked their interests in computer science. Following these initial discussions, participants collectively decided which practices and principles they would like to preserve-specifically the aspects they believe give life to computer science-as they move into the future with new ideas and innovations.

During the summit's second day, participants outlined four central visions for their field's ideal future. One of those visions included a reconfigured image of computer science in which the field is viewed as a highly respected and necessary tool to transform real-world problems. Another vision illustrated a future where computer science receives more scientific respect-one group said that "computer science should be seen as the physics of the 21st century." The third common vision included the integration of computer science into education programs, where computing is seen as fun, accessible and a core discipline similar to writing and math. The final vision centered on a future with greater self identity, where the definition of computer science is clear, consistent and agreed upon by all in the field. Following the development of their core visions, participants created research topics and ideas that would help make their ideal futures possible.

On the summit's final day, more than a dozen newly-formed groups gathered to work on their respective ideas for changing the computer science field. Groups that received high levels of interest included ones that focused on changing the image of computing, improving computer science curriculum and increasing educational opportunities for young students.

"I'm interested in changing the face of computer science, because there are very few women and minorities in my classes," said Sara Melnick, a computer science student from the University of Rochester. "It's disappointing that everyone thinks we're just geeks who sit in dark rooms with our computers. There is so much more to the field than people think."

Melnick said she joined the group that focused on computer science in K-12 education, because she wants to provide young students with the same opportunities she had by becoming involved in the field at an early age.

Reaching out to future generations of computer scientists at a young age is also important from a national security perspective, Denning said. "Computing is widely recognized as critical technology, and a lot of systems in the Navy depend on computing," he explained. "The Navy wants to be sure they will have access to expertise in these systems...so here at the Cebrowski Institute, we really wanted to do something innovative that hasn’t been done before; we wanted to put people back in the touch with the magic and beauty of computer science, because it's what we believe the key to attracting new people is."