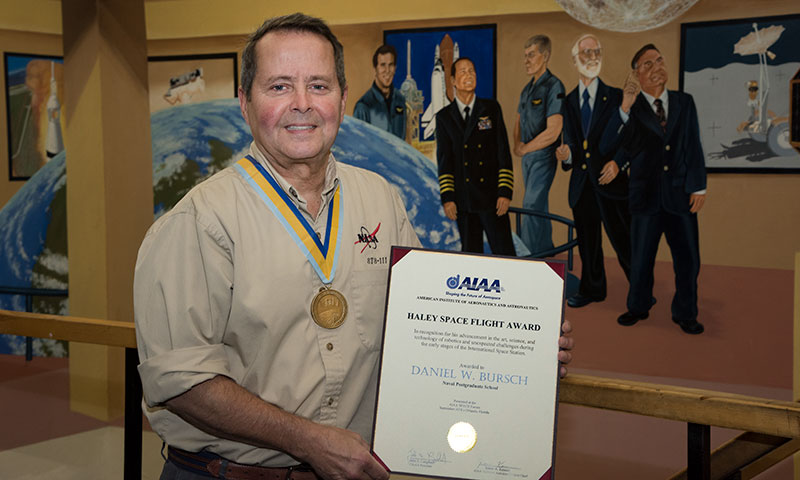 NPS National Reconnaissance Office Chair Professor retired U.S. Navy Capt. Daniel Bursch has been presented with the Haley Astronautics Award by the American Institute of Aeronautics and Astronautics (AIAA). The award is presented to an astronaut or flight-test personnel for outstanding contributions to the advancement of the art, science or technology of astronautics.

Bursch’s citation recognizes his contributions to advancements in technology specifically in relation to unexpected challenges during the early stages of the International Space Station. Bursch served at the forefront of some of the most critical procedures during the construction and early days of the ISS, where he distinguished himself on more than one occasion.

Bursch served as a NASA astronaut from 1990 to 2005, and flew on three shuttle missions as a flight engineer and shuttle arm operator. He was a key member of the 196-day Expedition 4 mission to the ISS, which then qualified Bursch, along with a fellow crewmate, for the record for spaceflight endurance until 2006.

Bursch, also an NPS alumnus, was the first astronaut to become certified in the operation of the Canadarm 2, the articulating arm essential in positioning trusses and modules for the ISS. He also developed many operational tips that crews later used in the control of cameras located on the booms of the arm. His constant review and expertise of the Canadarm 2 would serve him well during the Expedition 4 Mission.

One of the critical events, not atypical to the challenges of operating in space, which Bursch was recognized for came on February 4, 2002, when, while Bursch was on station, all computer network communications was lost between the Russian and U.S. segments of the ISS.

With the compromise in communications between the U.S. and Russian computers, the ISS guidance, navigation and control along with systems that stabilize the station malfunctioned. The station began to tumble, and was also in danger of losing electrical power. The ISS lost attitude control, U.S. communications, and any ability to point the U.S. solar arrays where the operators intended.

At the outset of the failure, ISS Commander Russian Col. Yuri Onufriyenko told Bursch and crewmate U.S. Air Force Col. Carl Walz to “pack your bags,” and prepare to move to the Soyuz capsule.

While mission control was only able to be in contact with the ISS on subsequent communication passes with Russian ground stations, procedures were given to the crew to manually control the U.S. solar arrays, based on non-intuitive angle inputs through the ISS computer. However, Bursch and his crewmates noticed that it became easier if they gave inputs based upon the Russian solar arrays, since the Russian system didn’t rely on a state vector, rather they used their own sun sensors for positioning.

Bursch and the crew then alternated viewing out of the station’s windows and pointing the arrays so that ISS could once again produce energy. The crews’ manual commanding of the arrays and Bursch’s quick actions saved the ISS that day, and allowed the extra time required to re-establish communications between the two segments. The incident proved to be just one of multiple scenarios during which Bursch distinguished himself as a critical contributor to the evolution of the ISS.

“I’m very grateful for any and all honors [I have received over the years]. But I must say that the [Haley] medal is the largest I have ever received!”