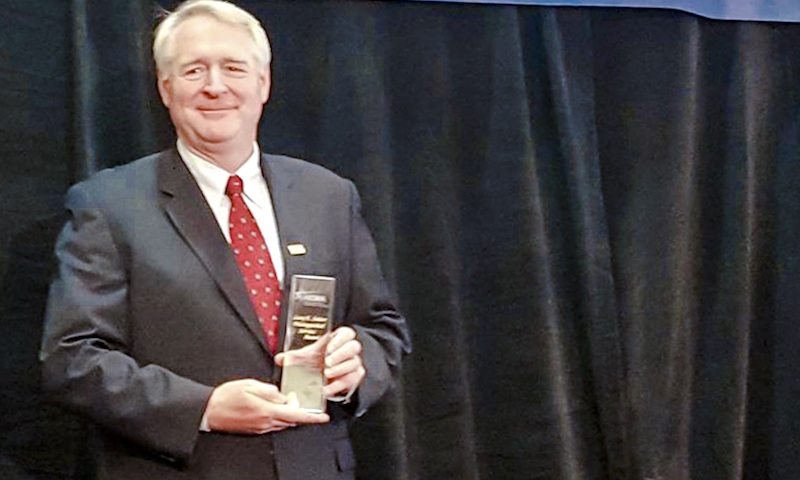 The award is named after a founder of CHDS, a guru of the emergency management profession, and is presented annually to those who have made outstanding contributions throughout their career in any facet of emergency management. The honor comes on the heels of Woodbury earning the Naval Postgraduate School Foundation’s Lt. Cmdr. David L. Williams Faculty Award in September.

“There are few people who have impacted, promoted and advanced the fields of emergency management and homeland security more than Glen Woodbury,” Sheets added. “Lacy Suiter would be very proud.”

Suiter’s widow, Norma Jean Suiter agreed. She recalled Lacy’s three maxims that Woodbury often repeats: Don’t attend a meeting you don’t chair; never shy away from taking an opposing position to test conventional thinking; and, don’t take anything at face value but absorb, debate, argue and then form an opinion.

“He saw you as a young man with great potential. And he would have appreciated the leadership you demonstrate today with everything you do,” Norma Jean Suiter noted.

An alumnus of the inaugural master’s degree cohort at CHDS, Woodbury has served as director since 2007. He came to the emergency management profession by way of the U.S. Army, in which he served from 1985 to 1992.

“Like many of my contemporaries, I accidentally became an emergency manager,” Woodbury said. “I was departing the Army after seven years and needed a job. A recently retired senior officer worked for the Washington State Emergency Management Division and another captain he thought he was hiring took another job just as I was talking to him, so he offered the job to me.”

Woodbury began in the Emergency Operations Center as an Operations Officer and would eventually manage the state EOC before being named Director. In the top post, he led the department during a series of high profile events – the World Trade Organization gathering in Seattle in 1998, the Nisqually Earthquake in February 2001 and the TOPOFF II Exercise in 2003. Along the way he guided the agency in the uncertain days after 9/11 when alert was heightened across the nation.

“There was no job I didn’t love in emergency management,” Woodbury said. “Even though I grew up in the operations side, I found that prevention and mitigation were really the more strategic, and most difficult, keys to protecting our communities. That eventually became one of my focus areas, at least from a policy perspective.”

Woodbury's experience in Washington also reinforced what was the highest priority in emergency management – people. The department focused on a culture of preparedness and readiness beginning at the elementary school level. Also, during his tenure, the state implemented the Amber Alert system along with the state patrol and other local dispatch agencies.

“This was very early in the national program but we saw incredible and heart wrenching outcomes almost immediately,” Woodbury recalled. “That may not be ‘traditional’ emergency management, but it sure was satisfying both professionally and emotionally.”

During 25 years in the emergency management profession Woodbury has witnessed a vocation that has grown more professional, respected and critical to modern society.

“I support that last claim with observations of the increasing trends and exponential changes in the world we live in,” Woodbury said. “The intersections of humanity, technology and our environment will produce ever increasing challenges and opportunities in every realm of health, safety and security. Emergency Management is one of the key nodes in that dynamic.”

The next chapter of Woodbury's career was shaped by the events of 9/11. A group of practitioners and academics that included Suiter, then NPS Associate Provost Paul Stockton and others, had already been weighing the possibility of an advanced educational program for first responders. Woodbury was contacted by the founders asking him to participate in a pilot master’s degree program that would become CHDS.

Shortly before completing his CHDS degree as part of the inaugural cohort, Woodbury traded the soggy northwest for the sunny Central Coast of California to join the Center full-time in 2004, at Suiter’s and Stockton’s request. He was named director three years later.

“Two ‘icons’ named Paul Stockton and Lacy Suiter asked me to join the team in Monterey,” Woodbury recalled. “It would be pretty hard to say no to either of those two mentors. Oh, and did I mention the Monterey part?”

Woodbury’s role as director is part CEO, part academic and part diplomat as he carries the center’s message to D.C. and the rest of the nation.

Through it all, he continues keeping Suiter’s wisdom in mind.

“My favorite ‘Lacy-ism’ is that every person in the world has a special gift and God-given talent,” Woodbury said. “The job of leaders is to find out what it is and apply it at the right place and time. I’d add to that that every person has something to learn from every other person they interact with; pay attention and embrace those gifts of others.”