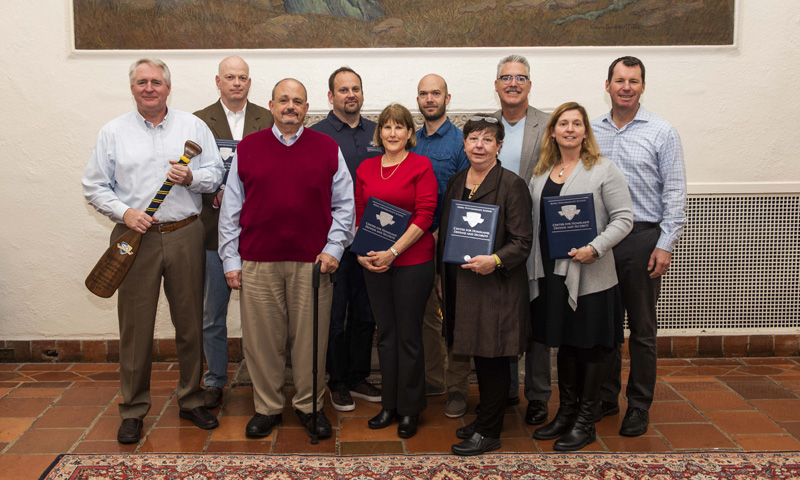 A group of students and faculty participating in the Center for Homeland Defense and Security Advanced Thinking in Homeland Security Program (HSx), celebrate the completion of the 18-month course, Jan. 17. HSx is a collaborative program designed to take an innovative approach to wicked problems across the homeland security space.

A cohort of top graduates from the Naval Postgraduate School (NPS) Center for Homeland Defense and Security (CHDS) returned to their alma mater to participate in an innovative program to examine wicked problems across the homeland security space. Coined Advanced Thinking in Homeland Security, or HSx, the program is an 18-month effort designed to build knowledge and create new paradigms for some of the most complex homeland security challenges facing the nation and global community.

“The mission of CHDS is to develop a cadre of critical thinking leaders at the local, state, tribal and federal levels,” said CHDS Director of Strategic Communications Heather Issvoran. “When we started, it was very nebulous. Organizations didn’t really talk to each other and developing strategies and policies that addressed threats like terrorism was a very new thing. Over the past 16 years we have aimed to make homeland security more of a collaborative effort.

“What HSx does is take some of the best and brightest from our graduates to tackle the ‘wicked issues’ in their agencies,” she continued. “The goal was to be able to bring them together and look at national level projects in an innovative way and really think about complexity.”

The program’s students represented a wide range of participants from the Department of Homeland Security – the U.S. Coast Guard, Immigration and Customs Enforcement, local law enforcement and more. Each student was a CHDS graduate, through either the center’s master’s degree program or the Executive Leaders Program.

“The big question that HSx answers is, what if we took the highest graduates and put them through another 18 months of discovery with three general areas to expand knowledge in,” said CHDS Director Glen Woodbury.

“We are also trying to tackle homeland security topics that don’t really fit into the master’s program or the executive program, and this really offers a way for us to test curriculum,” he continued. “We wanted to try out different lectures, speakers and topics in a safe and free space and HSx was successful in accomplishing all of these problems to varying degrees.”

Throughout the 18-month period, the cohort retuned to NPS for six different in-residence periods held once a quarter, with the program separated into three parts. The first dealt with idea generation, determining what the problem areas to look at are, and what knowledge they should expose themselves too.

The second focused on ways to tackle big problems, such as looking at how industries from separate organizations attack similar problems.

Finally, the third section put the information and knowledge throughout the course together, and applied it to large scale problems in all sections of government and society.

“We are all about implementing education,” said Issvoran. “It is one thing to have a master’s degree and to write a thesis, but it’s another thing to have your agency use it as a blueprint to solve their problems. This is taking it to the next level where we as a group try to tackle the most complex problems in realistic ways.

“These folks got together and developed almost 100 different projects,” she continued. “Now they are going to complete the course and look at launching some of their programs in their own agencies. When we started, we asked ourselves what can we work on that has national relevance and importance and this group delivered with a suite of projects that agencies can really look at, implement and model.”

Some of the projects that were developed through the course include “virtual barrier” technology designed to mitigate the impact of auto-related terror attacks, an emergency alert system through smart home assistant devices, and most notably, a comprehensive research database covering the history of K-12 school shootings, a project that has gained national media attention with outlets ranging from NPR to the BBC.

“Projects like the school shooter database are already changing the way administrators and police officers are looking at the issue and it’s debunking a lot of myths by using data and evidence instead of soundbites,” said Woodbury.

“That is one of the biggest benefit of this program,” he continued. “We change the ways we learn and teach, establishing and integrating the participants’ networks with departments across homeland security.”

Included in the program were a wide variety of lectures, on site visits and provocative scenarios implemented with the intention of expanding the thought horizons of its students, including a policy Hack-a-thon, on site visits to San Francisco Bay technology companies, conference calls with various industry and security executives, and testing emerging technology such as virtual reality equipment and drones.

“The biggest lesson that I have gotten out of HSx is that it’s OK to fail,” said Coast Guard Rear Adm. Meredith Austin, Deputy for Operations, Policy and Capabilities. “It’s OK to come up with an idea and realize that it isn’t going anywhere, and to have to drop it and start again. The world is not over and you can learn from your failure and continue on ...  Go down a different avenue that you have never thought of before.

“What was nice for me in my organization is that I was able to take some of these tools and actually apply them back at my home station,” she continued. “For example, meetings used to take forever because it would just be everyone briefing what they did. I was able to turn that on its head and focus on working on problems together. People were very excited to get their time back and work together collaboratively.”

While attending the course, Austin worked on a framework for providing in-person or virtual crises advice on demand, which aims to help on-scene commanders with step by step instructions in the form of both on-call experts or videos. According to Austin, the program could help elevate unforeseen new challenges, such as social media, that have arrived from a rapidly changing word.

“A major component of HSx for me was to be able to take skill sets that we learned out of the class and really apply them in the world,” said Delmar, New York Fire Commissioner Meredith Bastiani, who also works with the New York State Office of Children and Family Services.

“I think focusing on the concept that no idea is too big or small, and good ideas can come from anywhere. It’s about nurturing them and letting people explore different ways of thinking. It’s an incredibly powerful takeaway and its definitely one that I am able to apply to my work both in human services as well as fire services.

“Coming to the program, I originally wanted to do something related to data mining and using facial recognition to reunify children with their families following a disaster,” she continued. “But what I ended up working on radically changed throughout the course of the program. The first project that I worked on was a health alert system that looked at coming up with methods to detect potential infectious diseases at an earlier state to prevent future pandemics.”

“This experience is different from any other,” stressed Woodbury. “It is not just another classroom or think tank, but a combination where our students leave with a new skillset and network on thinking critically.”

While CHDS does not currently plan to make HSx a regular component of its course offerings, the program has definitely left a long-term impact on its master and executive programs.

“We have been able to incorporate a lot of the curriculum and lectures that we tried out in HSx in both the master and executive program, content that we were not sure if it would be appropriate or how it would fit,” Woodbury said.