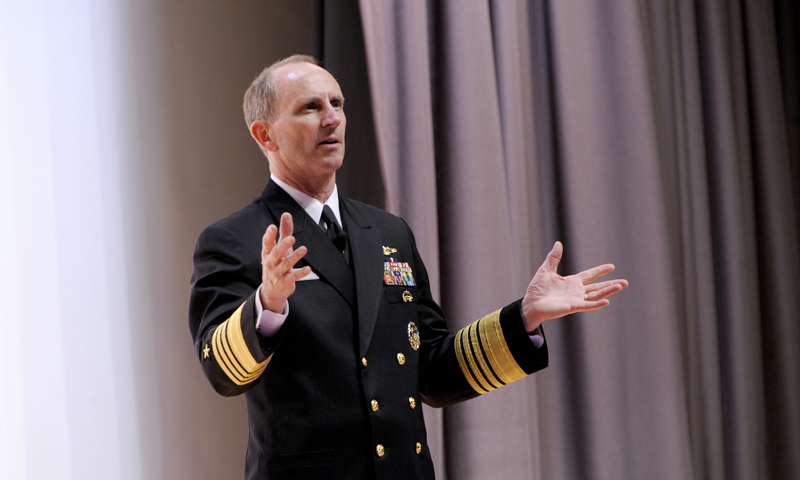 Chief of Naval Operations Adm. Jonathan Greenert responds to a student's question during an all-hands call with students, faculty and staff in NPS' King Auditorium, Feb. 1.

The Chief of Naval Operations visited the Naval Postgraduate School for an all hands call, Feb. 1.

Adm. Jonathan W. Greenert met with NPS students, faculty and staff to discuss where the Navy is presently, and where leadership hopes to focus efforts in the future. He took questions from attendees, addressing a range of issues that matter to the Navy community – from budget and resources to the role of training and education for the fleet.

“I want to tell you right off the bat, this institution is a very big part of where I want to take this Navy, and where whoever relieves me has to take this Navy. The Naval Postgraduate School is one of our big three institution,” began Greenert. “We grow kids up to be officers at the Naval Academy, we do our educating for warfare at the Naval War College, but here is where we make Jedis in a lot of areas that are very unique to our Navy – acoustics, cyber, financial management and a whole host of things.

“That balance of postgraduate education and the research you do here is very important,” he continued. “We are fortunate to have the students that we attract, the world renowned faculty that we have here, and the administration that makes it all come together.”

In addressing the current concerns of the Navy, Greenert pointed to his four main areas of focus – sexual assault, suicide, operations tempo and manning. He noted that sexual assault and suicide rates in the Navy are unacceptably high, and steps are being taken to ensure those numbers are reduced. He stressed that the fleet must take ownership of the problems and maintain the professionalism befitting Navy Sailors and officers, through respect and dignity for each other.

With operations tempo and manning issues, he emphasized the need to have the maintenance and manpower to successfully operate forward. Greenert spoke about the importance of establishing or maintaining a Navy presence at the major maritime crossroads – such as the Strait of Hormuz and the Strait of Malacca. He reinforced that strategic operations are critical for the Navy to fulfill the mission of ensuring national and international security in the maritime domain.

He provided an overview of current deployments and operations around the world, highlighting the focus on strategically positioning the fleet. He noted that equally important are the operational areas where the fleet can “restore, relax and refurbish.”  He pointed to specific areas – including Djibouti, Singapore and Australia – where U.S. Navy and Marine manpower has been increased for readiness.

“We need to continue to develop places around the strategic maritime crossroads. This is where the stuff of the world, that makes the world economy tick, goes through,” Greenert explained. “We have to have access to these places where we can repair, restore, relax and refurbish. These will be a big part of our future as we operate forward. Warfighting first, and be ready if you have to operate forward. You have to have the things to support it.”

Additional operational readiness, he noted, is being addressed for the Arctic region.

“We average about one submarine up there. One of my goals is to sit down and work things out with the Canadian Navy and NATO to see what the strategy is there for the future in all of the domains – surface, sea and air. What is the plan for the future? That is part of our dialogue.” 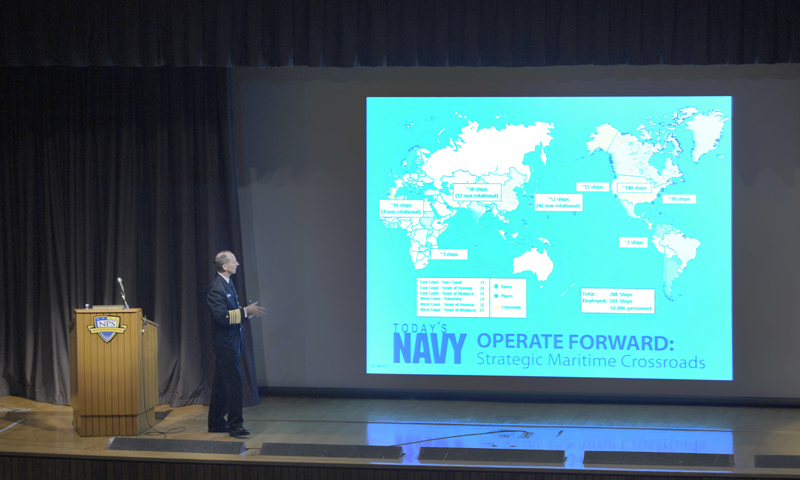 Chief of Naval Operations Adm. Jonathan Greenert outlines the future force to students, faculty and staff during an all-hands call at the Naval Postgraduate School, Feb. 1.

In addressing the future of the Navy, he looked at capabilities such as the Unmanned Combat Air Systems, new Littoral Combat Ships, Mobile Landing Platform and Joint High Speed Vessels that the Navy is expecting to deploy in the future. The goal, he explained, is to swap out the new additions to the fleet to operations such as humanitarian assistance and disaster relief and counter-piracy, freeing up the counter-terrorism ships for operations where their capabilities would be needed most.

Student questions varied, with a number revolving around the difficult choices that fiscal uncertainty demands. Greenert addressed the unknown surrounding the Continuing Resolution and sequestration, and was quick to point out that having capable warfighters with reliable equipment is the priority.

“Warfighting has to be first,” he said. “That’s how we have to think of things. How does whatever you are going to decide on affect the warfighter?”

In closing his presentation to the audience, the CNO expressed his appreciation for the students’ candid questions, and in their ability to lead the future fleet.

“It’s really invigorating to get the questions that I’m getting. You guys are thinking about things, and my time is limited. And knowing that when I go, people like you will come in and take care of the Navy makes me feel good and I appreciate it very much.”